The Nampa School Board held a special board meeting on May 12 to discuss their face covering policy for the remainder of the school year.

However, the meeting ended abruptly at the request of Board Chairwoman Mandy Simpson after one member of the public had finished her comments.

In the crowd, posters opposing mask-wearing and even a banner that says “Unmask our Kids. Enough is Enough,” which was held by several kids. 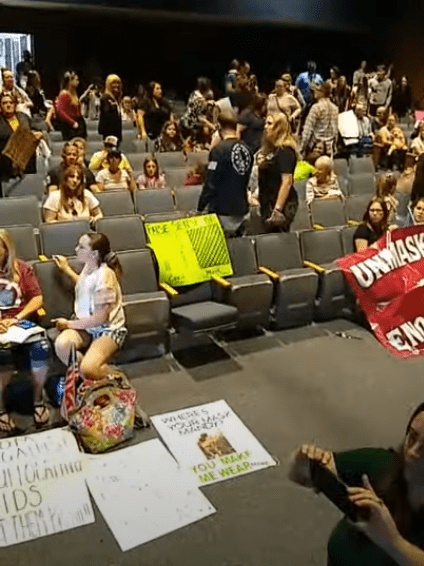 When the time for public comment was beginning, Simpson asked members of the public who were going to comment to keep their focus on the topic of the meeting and asked the crowd to be respectful, or they would adjourn the meeting at any point during the meeting.

The first two people to speak spoke against keeping a mask mandate in place for the school district.

The third person to speak wore a mask during their presentation and spoke in favor of keeping the mandate in place. At one point in the middle of the woman’s presentation, there was one brief interruption where an individual can be heard saying a couple of words and several people in the crowd making the “shhh” sound to them.

As the woman ended her presentation, some people in the crowd voiced their disagreement with the woman, with at least one person in the crowd booing, some clapping for her, and others saying words that are inaudible for the most part.

When the woman was sitting down, the crowd noise began to dissipate, and Simpson can be heard saying, “This meeting is adjourned.”

Here is the end of the meeting from the perspective of a citizen who was filming at the meeting:

In the video above, you can also see Nampa police officers are present and are ushering the school board members out of the meeting.

Idaho Dispatch reached out to Simpson and asked if there was a specific reason that she decided to end the meeting at that point. We have not heard back from her at the time of this writing.

The board will meet again today, via zoom, to conclude their discussion and make a decision on whether or not masks will be required or optional for the remainder of the school year.

Do you believe the board meeting should have been ended?