Twitter has blown up over the last few days over new screening measures at the U.S. Capitol for members of Congress who are going onto the House Floor.

Metal detectors have now been set up to screen members of Congress but many Republican lawmakers are refusing to comply with the new measures.

Congressman Russ Fulcher (Idaho – Dist. 1) is one of the lawmakers refusing to comply with the measures. Accusations have been levied against Fulcher that he “pushed” past a capitol police officer on his way to the House Floor.

Fulcher has responded to the alleged incident now with the following statement: 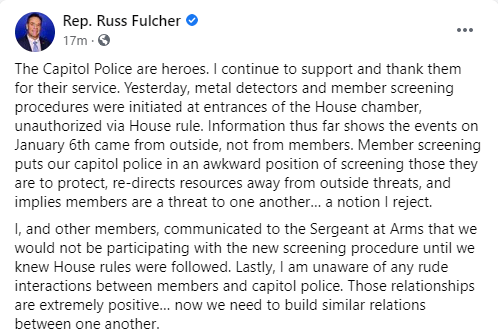 In the statement, Fulcher says that the metal detectors were put in but that there was no authorization to put them in as a screening procedure to go into the House chambers for members of Congress.

Fulcher says in his statement that he is unaware of any bad interactions between capitol police and members of Congress over the last few days.

Fuller alleges in his Tweet that he believes it was Fulcher who pushed his way through, set off the metal detector, and then pushed his way past a capitol police officer after running into her.

Fuller then sent out several more follow up tweets about Fulcher.

Here are those tweets in order of when they were posted by Fuller: 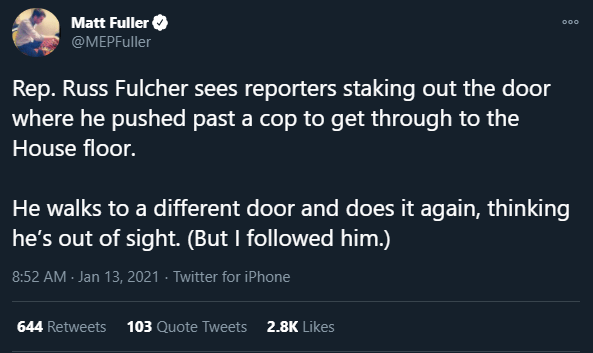 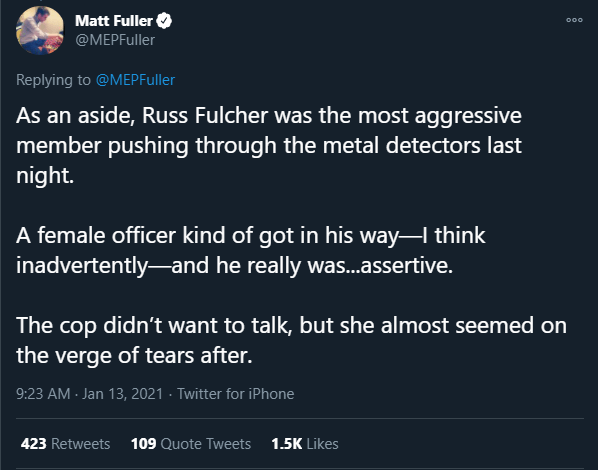 Idaho Dispatch looked through Fuller’s tweets to see if he had posted any videos or images of the incident to substantiate his claim that it was Fulcher and that he “pushed” his way past the capitol officer. We have not been able to locate any images or videos as of this writing.

In addition to looking at Fuller’s tweets, we sent him a direct message through Twitter asking for any evidence he has that the incident took place as he described it but we have not yet received any information at this time.

Idaho Dispatch also spoke with members of Fulcher’s congressional staff who denied Fulcher pushed, shoved, or did anything to a capitol officer. Fulcher’s office did say that he is refusing to comply with the new screening measures as stated in Fulcher’s official statement about the issue.

Allegations of anything other than that are not true.

Idaho Dispatch has also reached out to the U.S. Capitol Police Public Information Office to see if any incident by their officers and Congressman Fulcher took place. No one answered the phone at the time we called and the voicemail was full. We did however send an email to their office and will update this article if they respond.