Recently, a story from the Washington Post also created new headlines in Idaho about a Meridian man and Trump “cruises” that had taken place or were being planned.

Both the Idaho Statesman and the Idaho Press ran with headlines that discussed a Meridian man and his ties to a Portland Trump caravan. On the same evening of the Trump caravan, a Trump supporter, Aaron Danielson, was killed by someone who identified as “Antifa.”

The killing of Danielson took place two weeks prior to the story that is now circulating in Idaho.

The individual who organized the Trump cruises in Boise and Portland, known as Alex Kyzik on social media, is now speaking out after he and others say was an effort by the media to paint him in a false light and blame the death of a Trump supporter on him.

After the initial headlines were released, several Idahoans asked us to reach out to Alex to get his side of the story. Here are the headlines from the Idaho Statesman, Idaho Press, and The Washington Post that Alex, his family, his friends, and his supporters were frustrated with:

However, someone who knows Alex reached out to Idaho Dispatch and asked us if we would be willing to share his side of the story.

We sat down with Alex and interviewed him to discuss his response to what he says are lies and distortions from the media. The video can be found on YouTube here:

From the interview and our discussion with Alex, he is frustrated with a number of issues from the headlines and articles themselves.

He says that the only person responsible for the killing of Danielson is the individual who killed him.

Alex says that he had already arrived at the home he was staying at for the evening when the killing occurred.

We asked Alex about the event in Portland and whether the route for their Trump caravan went through downtown Portland. Alex told Idaho Dispatch that the route was published publicly before the caravan ever left and it was not supposed to go through downtown Portland. He says, however, that some Antifa and Black Lives Matter supporters deliberately cut off their route which did force some of them into the downtown area.

We asked Alex for the route that was planned for the Trump cruise in Portland and this is the image he sent us that he says was the route they released to the public: 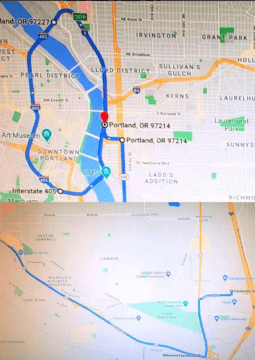 From the image above, this route avoids the main downtown streets by staying on I-405.

Alex says that he told the people in the Trump cruise to stay away from the downtown area and from the Antifa and Black Lives Matter individuals.

A video can be seen here of Alex saying that to his supporters:

In the interview, we ask Alex why he chose to do a Trump cruise in Portland when he lives in Meridian, Idaho.

Alex says in the interview that he grew up in Portland and that he has many family members and friends there. In fact, according to Alex, he moved to the United States when he was just six-years-old.

His family comes from Belarus and according to Alex they moved to the United States to escape the Soviet Union.

One issue that Alex and some of his supporters had with the media portrayal of him and his family is this particular line from the Washington Post:

Alex’s supporters felt that the Washington Post was accusing him of being a supporter of Putin and the Russian government. There is nothing posted in the article that indicates Alex’s family supports the Russian government and even the Washington Post article admits that Alex’s family came to America to escape the Soviet Union.

We did ask Alex in the interview if he was in any way connected to the Russian government for which he laughed and said he was not.

Alex currently has another Trump cruise planned for October 17th in Idaho. You can follow the details of that event on Facebook using the link here.

What do you think of the portrayal of Alex by the media? Did they give him a fair shake or did they distort the facts?