UPDATE: Ammon Bundy has released a Facebook video saying that he will not be attending the “Defund the Police” protest tomorrow.

In the video, he says that because BLM – Boise changed the venue and they are concerned about the safety of participants he has decided not to go. Bundy defended his decision to go to the protest stating that he wanted to reach out to BLM to support decreasing the power of police departments.

It is still unclear at this time where the event will be held.

For weeks now a “Defund the Police” protest has been planned by the Boise chapter of Black Lives Matter.

Tomorrow the group had originally planned to protest at Boise’s city hall. It was supposed to the same location as their previous protest on June 30th.

However, BLM – Boise announced today that they are moving the location but have not announced where it will be held.

The group says they will announce sometime Tuesday where the protest will be held.

Some of their leaders say they are concerned about the safety of their members.

In a statement to the public, a spokesperson for BLM – Boise said,

As we know local law enforcement has not taken a position whereby, we can feel comfortable in releasing our locations of our rallies. We’ve taken into consideration the threats but also the encouragement. We have decided for our location to be opposite of that of City Hall in the coming week. However, we are engaging in a rally tomorrow. Stay tuned to our social media accounts: Twitter, Facebook, and Instagram for details. We cannot trust law enforcement to protect black, brown, and white bodies that have come to our aid.

The group appears to be claiming that they cannot release the location of their rally for fear that the police will not help them.

However, Boise Police Chief Ryan Lee made it clear their officers intended to have a bigger presence tomorrow. Here is what he said in a statement to the media,

We have heard loud and clear in the last protests at city hall that the public wants more police presence, and swift action to violence and the destruction of property to ensure safety and peace and tranquility in our city.

We do know that the group Idaho Liberty Dogs plans to counter-protest no matter what. They confirmed their intention to be at the capitol in a message to Idaho Dispatch. The group says that they will be meeting at the capitol at the scheduled time of 5:00 p.m. and going to Boise city hall from there.

Another surprise to some in Idaho is that Ammon Bundy announced that he was invited to participate in the BLM – Boise protest by the organization and he accepted the invitation.

He posted a message on YouTube and explained why he accepted the invitation to join BLM – Boise and their protest.

In the comments section of YouTube, Bundy states why he is going and says,

Who is the greatest terrorist group? Who do the people fear most? Who loots upon the people’s property more? Who destroys more windows and more doors in people’s homes and properties and force their way in to terrorizes the people? Who kills more people and get away with it? Who takes more liberty than any other organization in the world? Who takes more of the fruits of the people’s labor? Is it the people in Black Lives Matters or the Police? Let us end being played my friends. It’s time to wake up. I do not align with the BLM organization but I do with the people and I don’t care what race they are.

While Bundy did accept the invitation to BLM – Boise’s event, he says that he does not align with the organization.

Some commenters do not appear to be happy with Bundy’s decision to accept BLM’s invitation. Here is a screenshot of some of the comments from the Bundy Ranch Facebook page. 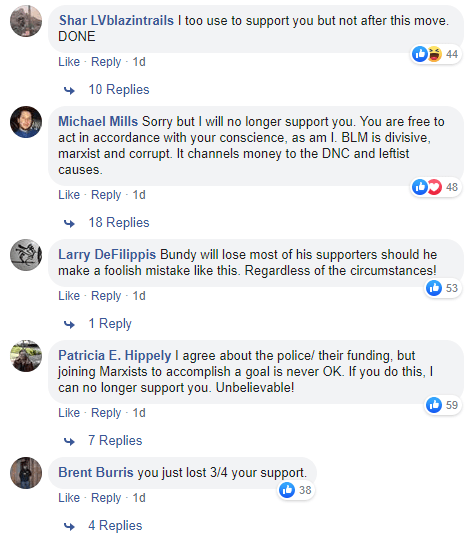 As a reminder, Idaho Dispatch intends to live stream the event on Facebook. Be sure to “Like” our page and set your notifications to “See First” so you know when we go live.

We will initially start with counter-protesters at the capitol and if we are able to, we will also go to the BLM – Boise location if it is indeed changed from city hall.

3 thoughts on “Update: BLM – Boise Moves Protest to Undisclosed Location, Ammon Bundy Says He Will Not Be There Now”