Idaho is a state known for its culture of firearm ownership.

Idaho has several ammunition manufacturing facilities. According to a study done by “WalletHub,” Idaho is the state most dependent on the firearm industry.

In addition to the WalletHub study, every year, a gun control group and a 2nd Amendment publication put out rankings for each state based on their firearm policies.

The gun-control group “Giffords Law Center to Prevent Gun Violence”  or “Giffords” put out a grade for Idaho earlier this year on how well our state implements gun control policies. The ranking is based on the status of Idaho’s firearm laws in 2020. “Guns and Ammo Magazine” also gave Idaho a ranking for its friendliness toward firearms based on our firearm laws from the previous year (2020).

Former Democrat Congresswoman Gabby Giffords from Arizona started her own gun control group after being shot in the head in Arizona where a murderer took the lives of six people at a rally for Giffords. After Giffords’s recovered from her injury, and after the Sandy Hook shooting, she started the Giffords to push gun control policies throughout the country.

Gifford’s group also publishes an annual letter rating for each state and how their firearm laws line up with the goal of her organization.

With the 2020 rankings out, Giffords gave Idaho an “F” rating.

Here is what Giffords says about Idaho on their website and the reason for the “F” rating:

Idaho has some of the weakest gun laws in the country, and took action to expand its dangerous permitless carry law in 2020. The state has the 19th-highest gun death rate in the country.

To save lives from gun violence, lawmakers should require background checks on all firearm purchases and enact an extreme risk protection order law to allow for the temporary removal of firearms from individuals in crisis.

Giffords also lists what they say Idaho does right regarding gun control and what they get wrong. Here is an image the group shared on their website (story continues below): 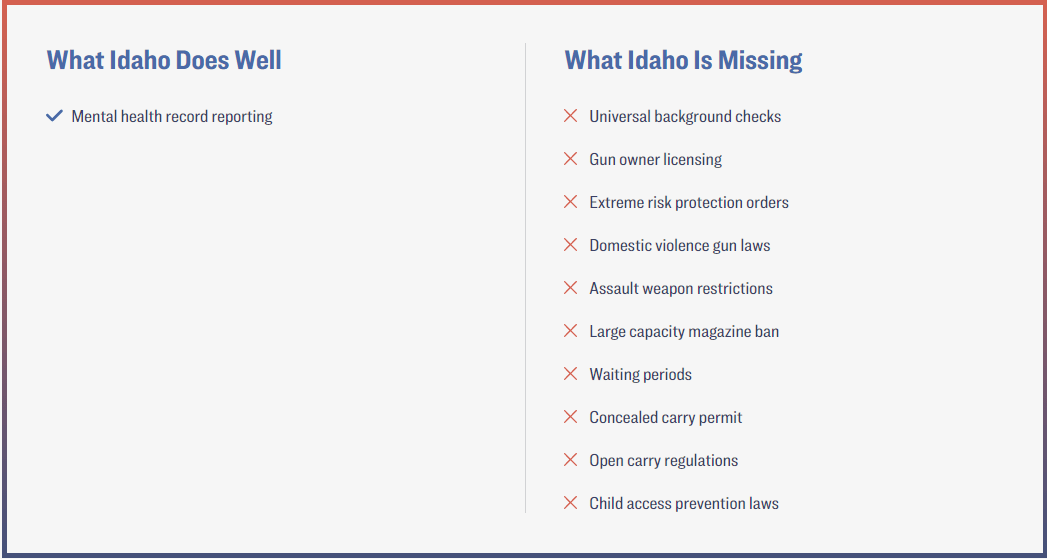 Guns and Ammo Magazine released its 2021 ranking for Idaho with a result opposite of Giffords.

The magazine has been listing state rankings for years, and they base the rankings based on how friendly a state is toward firearm ownership. Back in 2013, for instance, Guns and Ammo ranked Idaho “#32” in the country.

Over the years, Idaho has been ranked higher and higher on the Guns and Ammo ranking system. For instance, Idaho passed what is commonly called “Constitutional Carry” in 2016, and Guns and Ammo ranked Idaho “#19” in 2017.

This year, Guns and Ammo ranked Idaho as the #2 most gun-friendly state in the country. The site also says that in terms of “points,” Idaho is tied for first place with Arizona.

Here is what Guns and Ammo says about Idaho:

The big news for gun owners in Idaho this year was Governor Brad Little’s signature on a permitless carry bill in March. Permitless carry was already legal for Idaho residents, but this legislation extends the law to cover all U.S. Citizens over the age of 18 to carry, including in the cities.

With this slight change in law, Idaho ties the number one state in terms of points. (2019 rank: 2)