Update: Councilmember Sanchez has responded to Idaho Dispatch with the following statement when asked about her comment:

My observations were very clearly expressed.

It was the third meeting of the task force. Some citizens have said the task force is productive, while others say it should be disbanded.

Boise City Councilmember Lisa Sanchez said it is a “look into white female supremacy” when she says she stopped into the meeting for a few minutes.

Sanchez says she was one of only four ‘people of color’ in the room at the time. Here is what Sanchez posted on social media:

Some have previously criticized Sanchez for other comments she has made in the past, including one comment where she stated on social media that she did not have kids because she was afraid of what white people might do to them.

Idaho Dispatch reached out to Lt. Governor Janice McGeachin (R) and her co-chair Rep. Priscilla Giddings (R-White Bird) about Sanchez’s comment. Giddings told Idaho Dispatch did not have anything to say at this time.

The August 26 meeting of the Education Task Force will be open to public testimony if Ms. Sanchez would like to present her concerns.

SYSTEMIC RACISM ROARS AGAIN FROM BOISE CITY COUNCILOR – If EVER we needed a reason to win a Boise City Council seat here it is.
We shouldn’t be surprised. We knew it. We’ve seen it. We’ve heard it. It’s just that it is so flagrant and we really want it to not be so.

It appears Boise City Councilwoman Lisa Sanchez found her way to the Peoples’ House while an important meeting was underway – a meeting conducted by our Lt. Governor.
Did Lisa Sanchez sit, listen, or learn? Did she reflect for a moment on where she was, how powerful it is that any of us can walk into our glorious Capitol and partake of citizen government? No. She counted skins and sexes. With the precision of an Olympic judge she sorted out the boys from girls and wasn’t happy. She found some people wanting for skin tone and holds them accountable.

She wrote “I’m one of four people of color.” That is her standard? Who walks into a room and sees working people there by their God-given skin color? Skin color bigots do. Racists do.
To be “of color?” Under our Civil Rights laws being of color or not of color gets you nothing and loses you nothing. What was her point with her racist observation? Ironically, she had stumbled into the Task Force investigating racist curricula in the schools. Little did she know she was soon to become evidence!

And she doubled-down with “It is an interesting view into female white supremacy.” That is her view of our Lt. Governor’s task force? Is that what she thinks about her mayor? Her fellow city councilors? Are they skin-color bigots and racists like Sanchez, or are they “white supremacists”? But not to be done she concluded “Most of the task force members at the dais appear to be white women.” Appear to be “white” or appear to be “women”?

This is the lens of Boise City’s Council? Idaho’s Capital City’s elected leadership? Just who does she represent?

This behavior is not new to Lisa Sanchez nor she to these pages. Remember her infamous June 2020 letter that closed “Love, Lisa Sánchez. Brown woman who chose not to have children for fear of their abuse and murder by white people.” We knew then she was unsuited for public office but her now systemically racist rant seemed okay to the Marxist Democrats who elected her.

But it remains despicable. It is sexist. And it is racist. We call again for her resignation as she has once again soiled the seat she occupies and “serves.” Boiseans who reject racism and sexism should call their city hall and demand action. The people deserve better. Boise deserves better. Society deserves better. We MUST elect better in November!

We look for news of her resignation, or a least of the time and date of her scheduled public disciplinary hearing and the viewing opportunities for Boiseans.

Not everyone agreed that what Sanchez said was wrong. Some users on her Instagram expressed support for Sanchez: 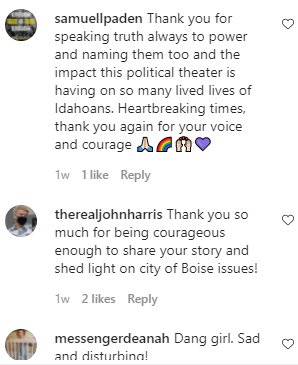 Idaho Dispatch also reached out to Sanchez for comment through her Facebook page but we have not yet received a response.

What do you think of Sanchez’s comment? Do you agree with her?