People choose not to have kids for a variety of reasons.

Some people don’t feel the desire to be a parent. Others choose not to have kids because they want to travel the world or have a career.

However, Boise City Council member Lisa Sanchez has made a statement on her public Facebook page that took some people by surprise.

She told her Facebook followers that she chose not to have children because she fears white people will abuse or kill her child.

The post discusses a particular incident at a George Floyd protest in Boise where a counter-protester, carrying a firearm, negligently shot his firearm into the ground.

Afterward, he was arrested by police. Sanchez’s post discusses the benefit the individual had of being white. If he were black or brown, she argued, the situation would have been very different.

Then, at the end of the post, she closes by saying she didn’t have kids because she feared white people would abuse or kill them.

While there are pockets of America where murders are prevalent, Idaho isn’t one of those states.

In fact, Idaho has one of the lowest violent crime rates in the country.

From 2017 to 2018 homicides in Idaho fell 23.26% with a grand total of 33 murders. That total isn’t for Boise only. The number accounts for all homicides in the entire state.

Two weekends in Chicago will typically see more murders than the entire state of Idaho will see in a year.

Not that any murder should be discounted, but relative to many places in the country, Idaho is a safe place to live.

Perhaps Councilmember Sanchez is referring to murders where race was the motivation? We attempted to find stories from the last few years of murders in Idaho and have not yet found one where someone was killed because of their race.

The FBI’s crime statistics show a total of 15 hate crimes for race in 2017 in the state of Idaho.

However, the FBI’s statistics do not break down what the specific crimes were.

Additionally, we attempted to search for stories in Google’s search platform for recent stories of murder in Idaho where race was a factor and couldn’t find any recent incidents.

The leftist Southern Poverty Law Center also doesn’t list a murder because of race for their “Incidents” in the state of Idaho. The last physical violence incident listed was in 2013, in Boise, for which the perpetrators faced federal crimes for their actions against a black man.

Certainly, the SPLC’s “Incident” list is not going to contain every incident of racism in Idaho.

Finally, we did find a website called Statista which tracked murders against blacks in 2018 and the total number they have listed in the entire United States is four. Of course, these numbers reflect cases where evidence existed that the perpetrator deliberately killed a black person because of their race.

It’s possible that some other murders were also committed because of race but no evidence was presented that they were motivated by such.

The big question for Councilmember Sanchez is why does she claim that white people are going to murder her children?

Council Member Sanchez holds a position of enormous public trust. Her statement on her public Facebook page was her personal opinion and perspective on race in Idaho. Will it spark fear, resentment, and division within the City of Boise and the State of Idaho?

We’ve reached out to Council Member Sanchez to clarify her comments and have not yet received a response.

If Councilor Sanchez responds to our inquiry, we will update this story accordingly. 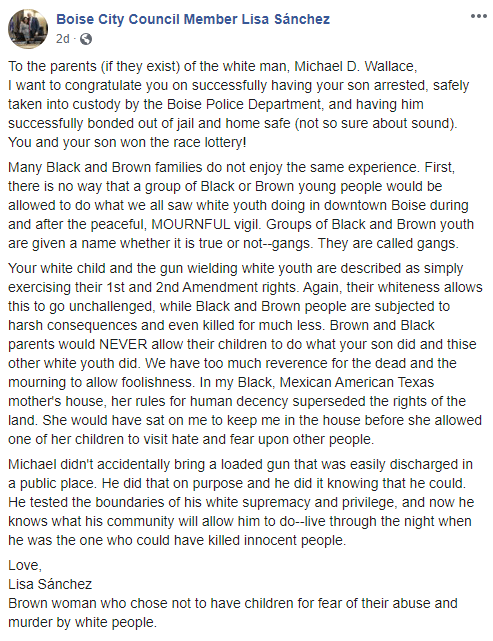 19 thoughts on “Boise City Council Member Doesn’t Have Kids Because of White People?”