Idaho Dispatch recently released an article that detailed a former CBS 2 (KBOI) reporter’s side of a story about an incident at the Idaho State Capitol Building in April.

The story involved Emri Moore, who was fired and had her press credentials revoked after she followed and filmed a woman who is accusing a now-former legislator of rape after she testified at the Idaho Capitol. Moore told Idaho Dispatch that she had not been contacted by a single media outlet, representative, or any other public figure or group to find out her side of the story.

Moore sat down with Idaho Dispatch and told her side of the events from the Capitol incident and provided evidence that she says proves she was innocent of any wrongdoing.

After the interview, Idaho Dispatch reached out to Moore’s former employer, CBS 2, reporters, legislators, ‘Jane Does’ attorney, and a group that Moore mentioned in our interview with her to see if they had a response.

Idaho Dispatch first reached out to Ryan Hawes, the News Director for CBS 2. Here are the exact questions we asked Hawes in our email to him:

1. Do you have any evidence that what Ms. Moore has provided to Idaho Dispatch is inaccurate?

2. If what Ms. Moore has said, and the evidence she provided us is true, why did CBS 2 not disclose to the public her side of the story? Why did you not run a story with her version of the events from that day?

3. Did CBS 2 also talk to Ms. Moore’s co-worker who was a witness to the events and did that coworker corroborate Ms. Moore’s story or contradict it?

4. Did CBS 2 follow up with Ms. Moore to verify that the video was completely deleted before coming out with a public statement?

Idaho Dispatch also attempted to call Hawes for comment, but we could only reach his voice mail. Additionally, we called Tom Long, General Manager for KBOI, to ask if he followed up with Moore to determine if the video had been deleted as CBS 2 had claimed in their statement. The video in question was never completely deleted. Neither Hawes nor Long has responded to our request for comment at this time.

There are five members of the committee, and Idaho Dispatch reached out to four of those members: Betsy Russell, Melissa Davlin, Kevin Richert, and James Dawson. (We were unable to find a direct contact for Joan Cartan-Hansen.)

Of the four members of the CCA that Idaho Dispatch was able to contact, only one responded to our request for comment on the Moore story, Betsy Russell.

I don’t have any further comment on this beyond the public statements we already have issued.
Betsy Russell, president, Capitol Correspondents Association

Idaho Dispatch also reached out to several other reporters and news directors to see if they wanted to respond to Moore’s story as they were also mentioned in it.

J Bates, the Channel 6 news director in Boise, and Don Day, the owner of Boise Dev, both told Idaho Dispatch that they did not have anything further to add at this time. However, Bates did post the following thread on Twitter in response to the interview (story continues below): 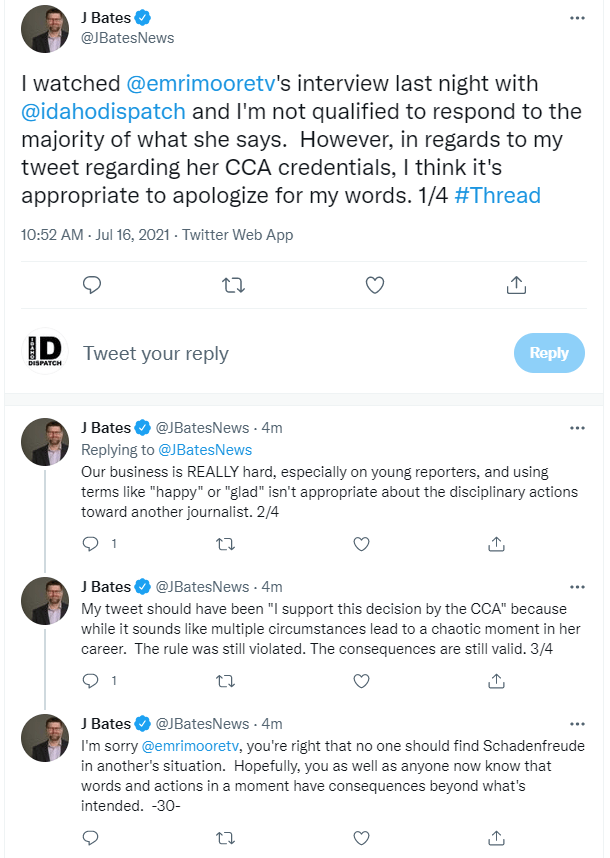 While Bates said he was apologetic for the words he used that day, he also said that the rule to not film the alleged rape victim was still violated and that the consequences were still correct.

Moore responded to Bates’ tweet by telling him that she accepted his apology.

Idaho Dispatch also reached out to Rep. Greg Chaney (R-Caldwell) two separate times to see if he wanted to respond to Moore’s interview. Chaney has not responded at this time. We also sent the Moore article/interview to all members of the House Ethics Committee, and none of them have responded at this time either.

Finally, Idaho Dispatch also reached out to ‘Jane Doe’s’ attorney and the Idaho 97% (Mike Satz specifically) to see if they wanted to respond to Moore’s interview. The 97% group had called for Moore’s firing and supported a suggestion that Ada County prosecutors should bring criminal charges should be brought against her.

Neither ‘Jane Does’ attorney nor the Idaho 97% responded to our request for comment.

Idaho Dispatch also asked Moore what kind of response she has received since our interview with her.

Since the interview has been released, I have received an overwhelming amount of support. I even received some apologies from people who said hurtful comments about me.

Additionally, Idaho Dispatch asked Moore if she had any response to the reporters, individuals, and groups who did not respond to our request for comment. Here is what Moore told us:

I’m not surprised that those who wrote a one-sided narrative or false accusations about me didn’t respond. Overall, I am just happy the truth is out there for everyone to see.

Moore has since been hired by the Idaho Freedom Foundation as a ‘Digital Journalist’ according to her Twitter bio.

2 thoughts on “Update: Did Reporters, Representatives, or Legislators Respond to Emri Moore Story?”