On April 28, a CBS 2 (KBOI) reporter in Boise was fired from her job for an incident at the Idaho State Capitol.

The incident happened shortly after a key witness testified that former Representative Aaron Von Ehlinger (R-Lewiston) had raped her. As the woman left a hallway near the Lincoln Auditorium, she was followed by several women, including CBS 2 reporter Emri Moore.

Moore was subsequently fired from her job and had her press credentials revoked by the Capitol Correspondents Association.

Now, Moore is giving her version of the events from that day and says that no media outlet or reporter ever asked her what happened and that her former employer should have defended her and explained her side of the story.

You can watch the full interview Idaho Dispatch did with Moore as we discuss the events of that day in the video below.

Idaho Dispatch first attempted to find any articles where Moore’s version of the events was given, and we could not find any.

Our main question to these journalists was whether or not they had reached out to Moore for her version of the story. Additionally, Idaho Dispatch asked members of the Capitol Correspondents Association what evidence they reviewed when they decided to revoke Moore’s credentials.

To date, only two of the individuals listed above responded to Idaho Dispatch’s request for comment and we were unable to find a direct contact for Cartan-Hansen.

The rest of the article contains Moore’s account from that day and some other information she felt was necessary to understand what happened that day and why.

First, Moore said that before April 28, she knew very little about the Von Ehlinger story. For the previous two weeks, Moore said she had been on assignment in Emmett covering the story of three missing children, as seen in this story just one day before the Capitol incident.

However, when Moore returned to work, she said two of her superiors reprimanded her and told her that her job is to film everything and that they would decide what gets aired.

On April 27, Moore said that she was told she would be going back out to Emmett on April 28. However, on April 28, Moore received an email early in the morning from her boss at CBS 2 in Boise, Ryan Hawes, telling their staff what their duties were that day. Moore was no longer going to Emmett but her duties on April 28 were to go to the Capitol and interview the key witness who was testifying. (Story continues below.)

The hearing began at 8:01 a.m. on April 28, as confirmed to Idaho Dispatch by Rep. Sage Dixon, the Chairman of the Ethics Committee. Moore says she did not arrive at the capitol until approximately 10:10 a.m. to 10:15 a.m.

At 10:26 AM, while Moore and a coworker set up a camera in the hallway, Dixon instructed reporters and videographers not to film the key witness in the von Ehlinger case. The witness was informed of those instructions 10 minutes later (10:36 a.m.) as she entered the Lincoln Auditorium.

Moore, still working in the hallway, did not hear Dixon’s announcement or the instructions being repeated to the witness. Moore provided Idaho Dispatch with a text message where her co-worker had sent her a link to watch the hearing. (Note: The time of 9:54 a.m. is Moore arriving at her work, not the Capitol.)

Moore said that shortly after the hearing, she was waiting in the hallway by the Lincoln Auditorium for the witness so they could interview her as instructed by her employer. Moore says that when the woman exited the hallway by the Lincoln Auditorium and into the main hallway, the woman walked up to Moore and her coworker and asked to be recorded.

Moore says that she began filming with her cell phone and that she followed the woman only after the woman requested to be recorded and filmed. Another woman, seen in Moore’s video, tried to get Moore to put her camera down to stop recording. Moore tells the woman, “She just told me I could record her, ma’am.” Moore told Idaho Dispatch that she did not know who the woman was but felt that some people were trying to keep the alleged victim from speaking out and that she wanted to give her a chance to share her story.

Moore told Idaho Dispatch that the incident in Emmett taught her that she was supposed to film everything as instructed by her superiors and let CBS 2’s managers determine what will air.

In the video provided to Idaho Dispatch, Moore is seen catching up to where the woman was on the first floor. The woman sees Moore and comes up to her again and says, “I’m right here. What do you want?” Moore replies to the woman by saying, “Nothing, ma’am” as she took several steps back. Moore said that the woman came toward her aggressively and she was not sure if the woman was going to physically attack her.

Shortly after coming towards Moore, the woman falls to the ground and begins crying and asking what she did wrong as more people surround her and shield her from view. Moore films for several minutes and eventually leaves to go back down to her camera.

While at her camera, Moore and another woman who had also filmed the witness, gave each other a hug. Moore was widely criticized for the hug and some individuals, including Rep. Greg Chaney (R-Caldwell), accused Moore of supporting the women. Some individuals said that she was working together with the other women.

Moore told Idaho Dispatch that she did not know the other women who filmed that day and has not spoken to either of them since. When asked about the ‘hug,’ Moore said that she hugs people who hug her and that she was shaking from the craziness surrounding the incident. She told Idaho Dispatch that she did not think anything of it at the time and just thought someone was trying to be nice to her.

Idaho Dispatch has chosen not to show Moore’s video at this time because it shows the witness’s face and has her voice in it. Additionally, the footage comes from April 28, where the media were asked not to film the key witness.

CCA, who allegedly did not contact Moore for comment, revoked her credentials the following day. Credentialed reporters at the Capitol are the only ones who can use space designated for media and with Moore’s credentials revoked, she would be unable to do her job for CBS 2 in the same capacity as those with credentials.

Moore was suspended on April 30 without pay, she says. However, Moore told Idaho Dispatch that she did not intend to quit and wanted to continue working at what she described as her dream job.

While Moore was trying to keep her job, members of “The Idaho 97% called for Moore to be fired and criticized Moore for her decision to film the witness. 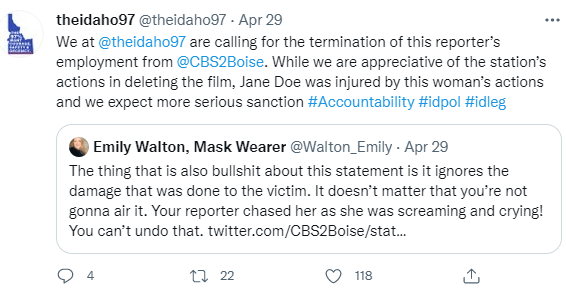 Moore told Idaho Dispatch that no lawmakers or groups asked for her side of the story from that day either.

Moore said that finding work has been difficult because media outlets who have interviewed her want to focus solely on the April 28 incident. An incident Moore says that only has one side of the story. Moore says that she is still saddened that no journalists asked for her to explain what happened that day. Additionally, Moore said she is stunned that her former employer did not come to her defense, especially when she was instructed to film the key witness, did not hear the instructions not to film the witness, and had been asked by the witness to record.

Idaho Dispatch also asked Moore if she regrets her decisions from that day and if she would do anything differently. Moore told us that she has no regrets because, based on the information she had at that time, she feels that she did not do anything wrong.

Moore says that as a journalist it is her job to film everything and detach herself emotionally so that a story can be covered. Additionally, Moore said that her superiors telling her less than two weeks before the Capitol incident that she is to record everything and let them decide what to air was a major reason she continued filming that day.

Idaho Dispatch will be working on several more follow-up articles. We wanted to give CBS 2, law makers, and media outlets, journalists, and groups a chance to review Moore’s interview before seeking comment and a response.

What do you think of Moore’s story?

Do you think she did the right thing, or, after hearing Moore’s side of the story, do you believe she still should not have filmed the witness?