Senate Candidate Scott Brock is facing a lawsuit over his claim that Rep. Tammy Nichols was paid for a vote on a bill in 2020 and is threatening a counter-suit.

An image of a tri-fold pamphlet was sent to Idaho Dispatch in which Brock claims that Nichols took money from Medical Recovery Services for a vote. The firm of Smith, Driscoll, and Associates has sent Brock a “cease and desist” letter on behalf of MRS which you can see at the bottom of this article.

Brock’s claim stems from a bill passed through the Idaho legislature in 2020, HB 515, known as the Idaho Patient Act.

It was then passed out of the Business Committee with a “Do Pass Recommendation” on February 20.

According to campaign finance records, Nichols logged a donation from MRS on February 10. Nichols told Idaho Dispatch that she reported it on that date but that the check had been sitting in her mailbox longer than that. She added in a statement to Idaho Dispatch,

Contributions that are a $1000 have to be reported within 48 hours. I received the donation and reported it on the 10th to abide by Idaho law.

During the 2020 Idaho legislative session, Nichols received over a dozen donations. One of those donations was for $1,000 from MRS. Nichols had 48 hours to report the donation.

Nichols was the only legislator to receive a donation from MRS in 2020, but the company did donate $1,000 to the Bonneville County Republican Party in September of that year.

Does the donation equate to bribery?

Brock said the donation came in hours before the vote. Based on the date when a vote took place, and the donation was reported, there were at least four days between the deposit and a vote.

Idaho Dispatch asked Brock if he had any evidence of a quid-pro-quo that we could post, but he has not yet responded to that specific question.

Brock did tell Idaho Dispatch the following regarding the bribery claim,

A donation accepted during session, hours before a vote in favor. Public perception is that of corruption.

In the statement Brock sent to Idaho Dispatch, he included a Tweet from an Idaho citizen to support his claim. Here is an image of that Tweet: 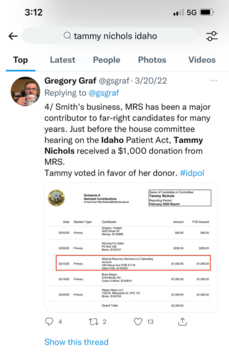 The image above states that MRS is owned by Bryan Smith, a Republican candidate for Idaho’s 2nd Congressional District. However, Smith told Idaho Dispatch in a phone call that he did not own MRS when the donation in question was made.

Regarding Brock’s claim that Nichols didn’t own property, he told Idaho Dispatch the following,

As for her home ownership, I apologize. The chain of custody of the title information is questionable according to CC records. I should have reviewed the material before it was printed for me.

Finally, Brock had also said Nichols voted against the NRA.

Here is what Brock sent Idaho Dispatch regarding the NRA claim, which appears to be from an email, article, or another source about the bill at the time it was passed:

Firearm shooting ranges have established a long tradition of service to a wide variety of citizen groups in local communities and they serve as a location to hold both informal practice sessions and organized competitions for those engaged in recreational shooting. Shooting ranges also serve as training facilities for law enforcement officials and military personnel, as well as offering firearm and hunter education and safety courses. These courses provide invaluable hands-on instruction in the safe and proper handling and use of firearms.

Thank you to Governor Brad Little for signing this important shooting range protection legislation into law. Also, thank you to NRA Members and Second Amendment supporters for your calls and emails of support to your state lawmakers.

Members of some shooting ranges (like Blacks Creek) during Covid, were forced to shut down by F&G, even though it is an outdoor range. The range management was powerless because F&G called the shots. The situation would have been different if the management was directed by F&G. I wasn’t comfortable with the government controlling more and more shooting ranges.

Public Shooting ranges have a place, but if they are subsidized to the point where they push out private ones, the government can call the shots- who shoots, when what and how.

Nichols was given an “A” rating by the NRA in 2022 and received their endorsement.

Regarding the bribery allegation, Brock is now facing potential legal action from MRS, but Brock also said he was ready to counter sue.

Here are the images of the cease and desist letter sent on behalf of MRS to Brock (notes for the article listed below images):

Notes: The image of MRS is from East Idaho News. Additionally, the citizen in the tweet Brock sent is suing Idaho Dispatch Editor Greg Pruett in a countersuit, after a lawsuit was filed by Rep. Chad Christensen against the citizen pictured above.