Idaho Farm Bureau has denounced a campaign mailer sent out by Scott Brock, a State Senate candidate in District 10.

The mailer contains wording that has the Farm Bureau logo underneath it. A text box surrounds both the logo and the text.

Here is the image of one side of the mailer (story continues below): 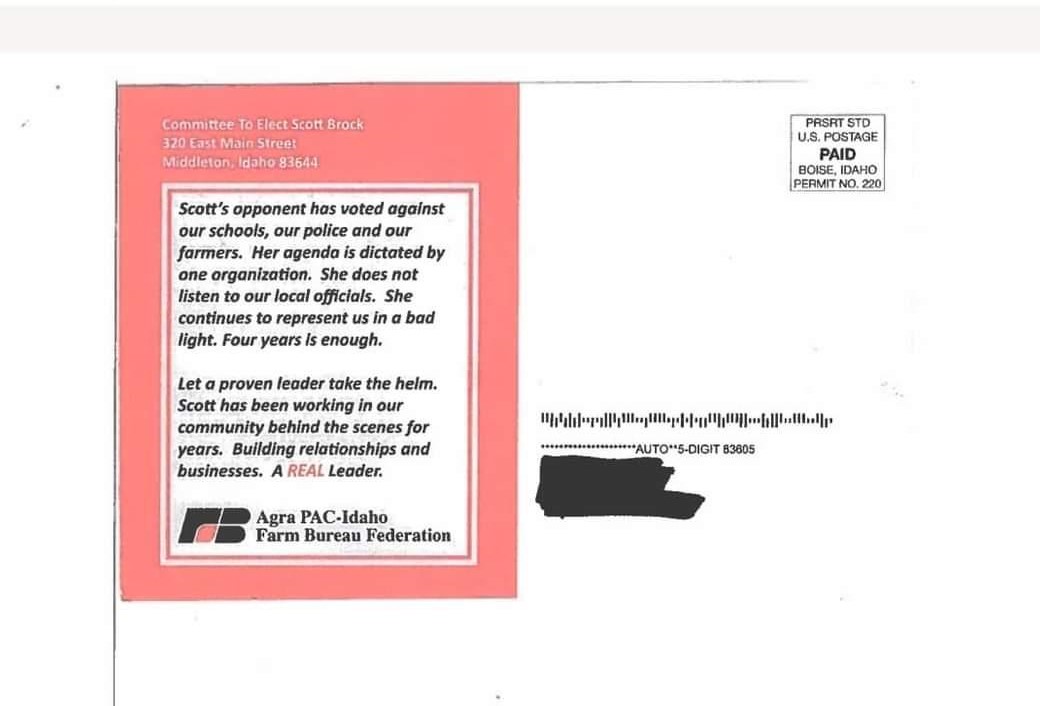 The question surrounding the image is whether Farm Bureau had made the statement inside the box. There are no quotations surrounding the text, but some have argued that it is made to look like a quote and endorsement from Farm Bureau.

Idaho Dispatch reached out to Farm Bureau to respond to ask if they had made the statement on the mailer and if they had endorsed Brock.

Idaho Farm Bureau President Bryan Searle and Agra-PAC Chairman Scott Steele released a letter today denouncing the mailer and the use of their logo. Here is the letter in its entirety:

To whom it may concern:

The Idaho Farm Bureau, and its Political Action Committee Agra-PAC, were first made aware of a mailer from Scott Brock the afternoon of April 20. We immediately contacted Representative Tammy Nichols to let her know this was an unauthorized use of our name and logo and to assure her we would do all we could to rectify the situation.

Agra-PAC has not endorsed Scott Brock. The words that appear to be attributed to our organizations on the postcard are not from anyone within the Idaho Farm Bureau, or Agra-PAC, nor do they represent our views of Rep Nichols.

We are taking this matter very seriously. The postcard does not represent our values or practices. We have not and will not engage in attack ads to gain support.

We are exploring all options to determine how to best correct this egregious situation. We will do all we can to ensure our name and logo are not used without our authorization and that there are consequences for doing so.

The letter states that the use of the logo was not authorized and that there would be “consequences” for doing so. The group also said that Agra-PAC, the political arm of Farm Bureau, has not endorsed Scott Brock.

Idaho Dispatch reached out to Brock for comment and clarification, but we have not received a response at this time.

Brock is also facing a potential lawsuit from Medical Recovery Services and is threatening a counter-suit over an allegation he made in a campaign tri-fold that his opponent, Rep. Tammy Nichols (R-Middleton), took money in exchange for a vote.