The following Op-Ed was submitted by David Goerg. Note: Op-Eds do not necessarily reflect the views and opinions of those at the Idaho Dispatch.

I recently attended a Chamber of Commerce breakfast in Rexburg, ID. The organizers of the event had invited the commissioner for Madison County and the mayors of Sugar City and Rexburg to offer “state of the county” and “state of the city” addresses, but the event itself took an unexpected turn.

The room was filled with affluent members of the community. I recognized high-level administrators from the local college in attendance, as well as city council members I had often seen in action at the City Hall. Businessmen from the region had gathered alongside police officials for a hearty breakfast, all dressed very formally for 7:30 in the morning. 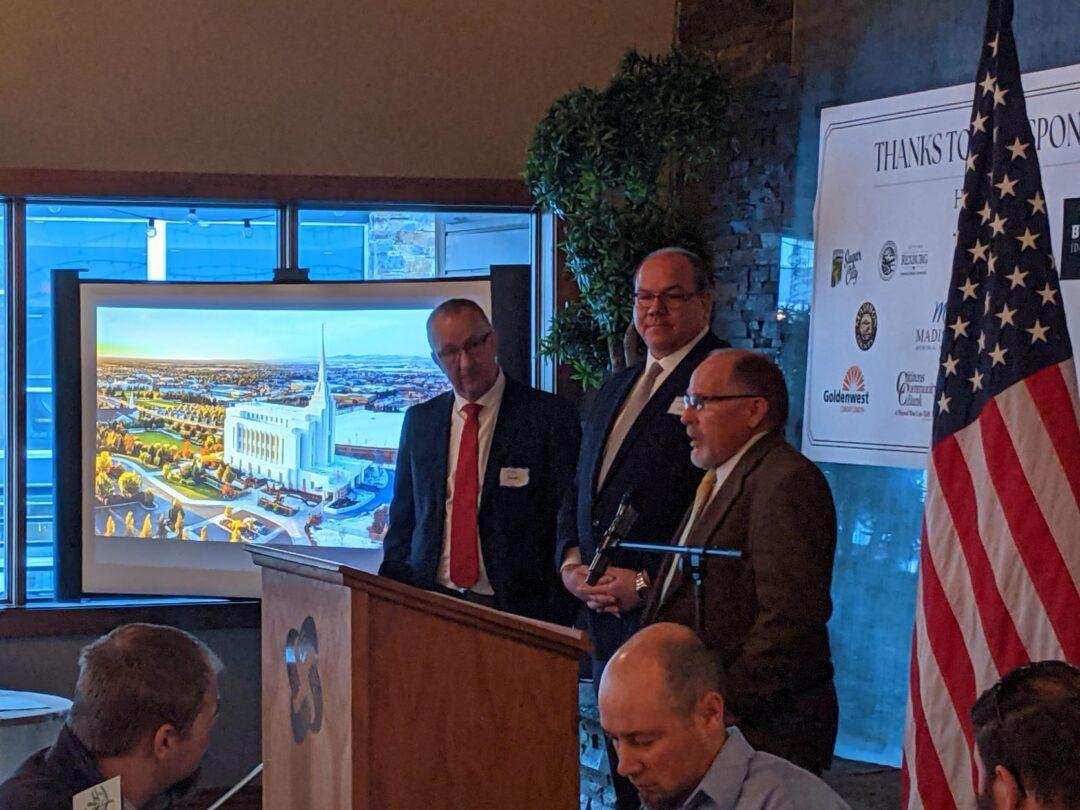 I was in attendance as a member of the press. I remember ducking beneath a news camera that had been set up in the back as the event started and I made my way to a table at the back of the room. To all appearances this was a notable public event that was meaningful to the region – after all, the local media was recording the speeches for a nightly news story.

I’m not exactly sure what everyone in that room expected to hear about that morning, but I’ll bet they were not expecting what Steve Adams – the mayor of Sugar City – had come to report.

“I would love to provide a nice uplifting message today,” said Adams. “But one of my responsibilities as mayor is the responsibility to protect the rights of the people I serve. Those rights are being violated in major ways by whole federal and state governments.”

Adam’s continued his “state of the city” address saying: “The biggest problem with Sugar City through this pandemic was not anything that happened inside the city, but it was a violation of individual rights by government that made any of our local issues pale in comparison[.]”

The shock-factor of his message didn’t stop there. In the course of his remarks, he clearly outlined the perils of the massive federal stimulus efforts which have come about due to COVID-19, going into significant technical detail as well as providing a simpler explanation.

“The federal government is stealing the funds [from cities] and then giving them back after they’ve skimmed off the top,” said Adams. “[They are] providing those (ARPA) funds in a way that promotes the principles of socialism, including a massive transfer of wealth[.]… If I go with two friends and buy a pizza and they cut that pizza into six pieces, we each have two pieces. But what if the server comes back along and takes half of those pieces and gives them another table. They still have two pieces of pizza, right? But they’re worth half what they were before. And this is serious. This is what is happening to our money in Sugar City.”

As I reported in the Rexburg Commons, Adams said that one of the major purposes of his speech was to call attention to what he sees as wide-scale theft, and publicly denounce the actions of a predatory and negligent government.

“You may wonder how this amazing theft was possible?” questioned Adams. “It was not done in secret. It was not a great mystery. But rather than choosing to explain what has happened our elected representatives are too busy pushing and shoving to get their hands on the money than take the time to explain.”

In addition to the economic details that Adams mentioned in depth, his speech also called upon public leaders and those present at the Chamber of Commerce breakfast to sound a warning to their constituents.

“We are witnessing an amazing turning away from the freedoms that built our great country,” Adams asserted. “And yet where’s the outcry from our federal and state officials? Most of them are fiddling while the nation burns down around us. I believe it is the duty of every elected official at any level to speak out and share what is being done with the people we represent.”

Adam’s concluded his remarks with a clear challenge: 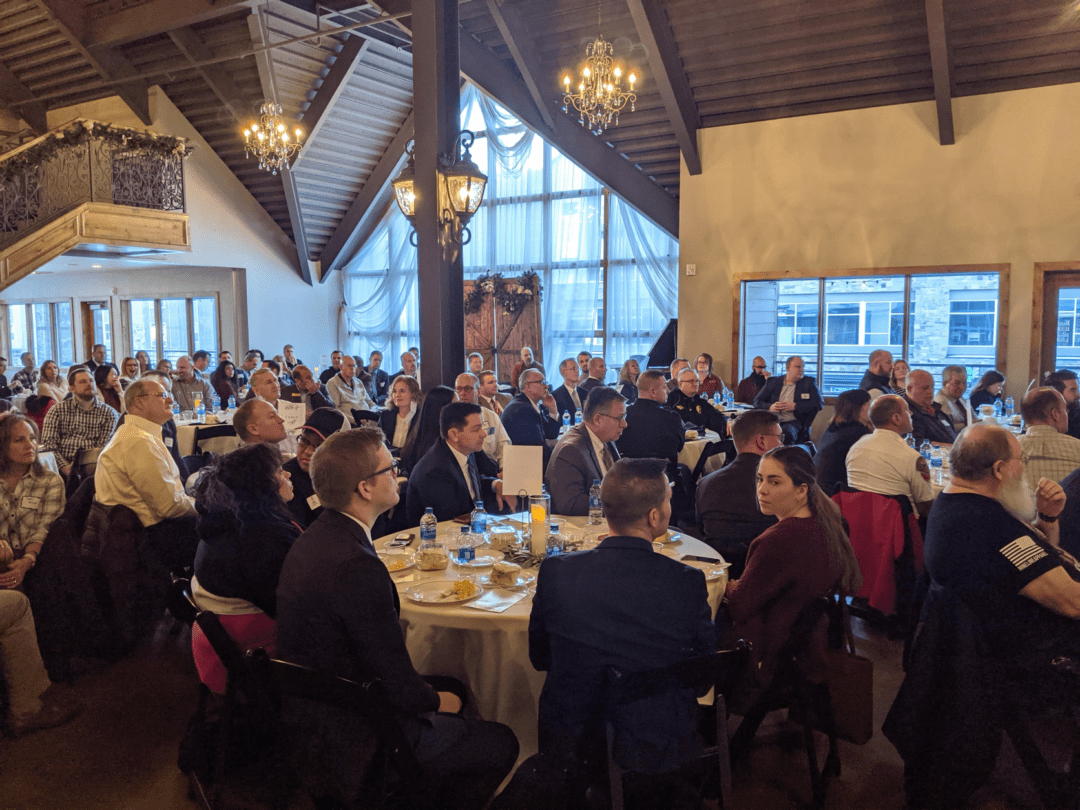 By any standard of evaluation, Adam’s speech was unorthodox, remarkable, and unexpected. And the contrast between his speech and that of his peers, Madison County Commissioner Todd Smith and Rexburg Mayor Jerry Merrill, was impossible to ignore. You would have had to be deaf and blind to miss the difference in substance, tenor, and tone.

Yet the public didn’t hear even a whisper of this newsworthy story. Instead, coverage of the event by the local media included separate footage of Adams from a Q&A session that occurred after the formal speeches had been given.

In that article, Adams is quoted as saying, “”These big money development firms are now looking at Madison County, and some of them see this little city right up above a bigger city and they’re like, ‘Oooh, look at all that land and a small little city.’ We can get what we want, but it’s created a huge influx of inquiries and applications. And so we’ve hired a part time person, but I’ll bet all of us have done some different things to try and welcome that,” Mayor Adams said.”

To anyone who wasn’t there on Tuesday morning, it’s as if Steve Adam’s speech in one of the most public venues of local government had never happened.

This is the blind eye of the Idaho press.

There are many examples of the willful blindness of Idaho’s prominent media.

Take, for instance, a recent event in the Senate involving Sen. Christy Zito.

As the Senator stood in the fifteenth order of the Senate – (a time designated to allow personal remarks by members of the Senate) – she was abruptly silenced by the force of an irregular partisan vote.

The event itself was shocking, as any casual observer will admit. The quickness of Senate Majority Leader Kelly Anthon (R-Burley), as he grasped for a way to silence the free-speech of Sen. Zito was hauntingly echoed in the overwhelming chorus of voices from his fellow Senators.

The puppet-master stood, and the puppets responded.

The issue at hand was the mischaracterization of Zito’s acts in the Senate. The Senate Caucus leadership issued a press release stating that Zito had cooperated with Democrats in attempting to derail the passage of an income tax bill, which was simply not the case. She supported the bill and only wanted to add Grocery Tax Repeal to it.

Yet as in all politics, such attacks are to be expected – it is simply par for course.

What is not expected is the stifling of the speech of Senators by the warped and partisan machinery of Idaho’s GOP.

Senator Zito gave her report of the events of that day in an interview after the event:

“On February 2 it was my intention to further explain my position and to defend myself.  I laid a foundation of records of senate proceedings and included some interesting points of historical importance to me.  I spoke for close to 3 minutes, I don’t know the exact length of time, it was not until I asked to read from the senate press release and defend myself, that Senator Anthon asked to go at ease.

I was prevented from saying “Yesterday, I made it very clear to this body and the citizens of Idaho that I wanted to add additional tax relief to the income tax bill we passed yesterday.  It was not a hostile takeover, and it most definitely wasn’t an effort to derail the bill.  I just wanted it cleared up, I feel that this line of the Senate press release is a gross mischaracterization of my efforts.

I was accused of an intentional attempt to derail the bill before the senate, this is not true, I will direct you to the video of the day, my words are clear, my motion was to add the repeal of the tax on food.

When our last breath is taken and we face our God, our integrity is one of the assets we take with us. May God bless this body and our great state.

I will not try to speak for Senator Anthon’s intentions.” – (Sen. Christy Zito, from a private interview.)

Sen. Anthon later claimed that Sen. Zito’s remarks were a violation of the rules of the House, and his only intention was to make sure the rules were being followed.

And yet there is a gaping hole in his explanation.

In an interview with Greg Pruett of the Idaho Dispatch, Jennifer Novak, the Senate Parliamentarian, said “There were rule violations prior to the start of the reading of the [Senate’s press release].”

Pruett went on to observe:

“According to Novak, Zito’s comments violated the rules from the very beginning. However, Zito had read for 2 minutes and 39 seconds before being interrupted.

It wasn’t until Zito tried to read the Senate press release from the day before that she was stopped.

Idaho Dispatch asked Anthon why she was not stopped before she attempted to read the Senate press release. Anthon has not responded to that question at this time.”

Incredibly, there is not a single report on this notable event in the media, apart from the Idaho Dispatch.

This is the blind eye of the Idaho press.

From my perspective as a journalist, these stories are newsworthy – because they are actually happening. Regardless of my political persuasion, Steve Adams said what he said to the entire Chamber of Commerce. He spoke for ten minutes with a single-minded focus on his message, but the blind eye of Idaho’s media swallowed it with silence.

And on the other hand, when a state Senator in good standing stood in the fifteenth order to deliver rightful personal remarks, she was silenced.

Idahoans deserve to know what is being said and done in their State.

This is just the tip of the iceberg, but the many other travesties of the negligent and willfully blind press coverage in Idaho are stories for another day. God-willing, they will be spoken upon the house-tops as hidden things are brought to light, as good men and women in our state step forward to preserve the truth and redeem the integrity of our State and local governments.

I think I hardly need to point out there are many people in the State of Idaho who do not trust either major political party.

Instead, as true constitutional conservatives, we often find ourselves on the outside of partisanship. This is clearly what happened to Sen. Zito when she came into conflict with party leaders. And it is arguably what happened to Mayor Adams when he sounded the alarm against federal overreach.

We should probably remember the powerful political parties who now govern the United States have been building up networks of power, funding, social connections, and other combinations of power and affluence for the better part of a century. The combination of the press and government is just one example of a distorted government power, putting “in the place of delegated will of the [state,] the will of a party[.]”

Who was ultimately deprived of Mayor Adam’s warning? The mayor, or the people of Madison County?

Who was silenced in the Senate on February 2nd? Christy Zito, or the people who elected her?

It is certainly something to think about.

5 thoughts on “Op-Ed: The Blind Eye of the Idaho Press”