While Donald Trump Jr. is scheduled to visit Idaho in Stanley tomorrow on behalf of President Donald Trump’s campaign for a fundraiser, a presidential candidate is coming to Idaho herself.

Jorgensen is currently on a bus tour that will be stopping in Idaho, Montana, and South Dakota in the coming days. 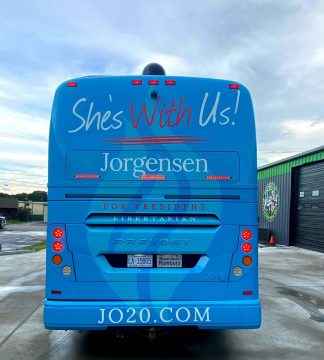 Idahoans will have a number of candidates to choose from for president on November 3rd. However, only Jorgensen, Trump, and Joe Biden will be on the ballot in every state.

Jorgensen will stop in both Boise and Idaho Falls this week to campaign in the Gem State.

The first event will take place on September 16th in Meridian. You can follow an event link for the event here.

Details for the event when they are available will be on the link here.

Jorgensen will be the first presidential candidate to visit Idaho for the 2020 general election campaign season.

Idaho Dispatch will be on the ground in Boise to cover the event and we intend to live-stream the event.

If for some reason the live-stream does not work, we will have the event recorded and uploaded to our YouTube channel.

Make sure you are subscribed to our YouTube channel and following us on Facebook so you can see our coverage of Jorgensen’s Boise event.

Will you be attending the Jo Jorgensen event in Boise or Idaho Falls? Are you a supporter of the Libertarian Party?