More details are emerging in the ethics probe into Rep. von Ehlinger (R-Lewiston) as the public hearing is scheduled to take place tomorrow morning.

News reports from the Associated Press surfaced yesterday regarding the von Ehlinger case. The information came from a “Public Records Request” (PRR) that the AP obtained with several documents discussing phone transcripts, interviews, and other details regarding the allegation of a woman accusing von Ehlinger of rape.

These are non-issues which only serve to distract from the heinous, demonstrably false allegations which have been leveled against Representative von Ehlinger. He maintains that he is innocent of any wrongdoing and he looks forward to putting this matter to rest.

Idaho Dispatch has also obtained a letter sent from von Ehlinger’s attorney (Dindinger and Kohler Law) to the Attorney General’s office and a third polygraph test that von Ehlinger had conducted on April 26.

In the letter to the AG’s office, von Ehlinger’s legal team brought up several concerns they have regarding the rules for the hearing on April 28.

The letter lists 13 different concerns and an additional concern over Rep. Brent Crane (R-Nampa) serving on the committee. The letter alleges that Crane told von Ehlinger’s previous attorney that he had the votes to expel von Ehlinger from the legislature.

Crane is one of five Ethics and House Policy Committee members who will ultimately decide what recommendation will go forward to the full Idaho House.

Idaho Dispatch reached out to Crane to see if it was a statement he had made and if he did, did he feel he could be fair and impartial during the von Ehlinger hearing. We have not yet heard back from Crane at the time of this writing.

In the remainder of the letter, von Ehlinger’s attorneys question the “fairness” of the proceedings and whether his constitutional rights will be violated by some of the rules that are set up for the hearing.

Here is a screenshot of some of the objections that von Ehlinger’s legal team posed: 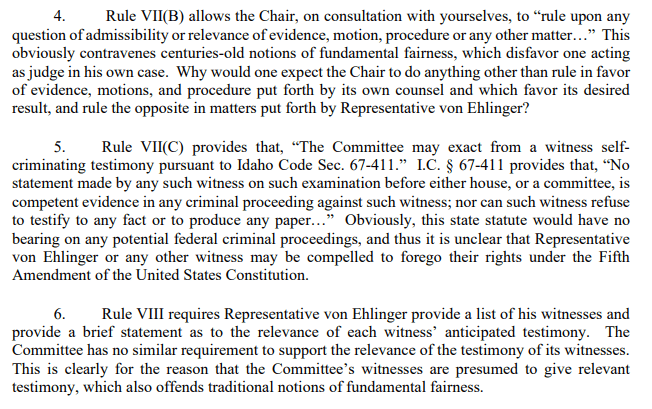 Throughout the letter, von Ehlinger’s attorneys claim that the process is jaded against their client. You can find the full results of their concerns at the bottom of this article.

In addition to the letter von Ehlinger’s legal team sent to the Attorney General’s office, Idaho Dispatch has also learned that von Ehlinger has taken another polygraph test.

This makes the third polygraph test that von Ehlinger has taken. The first was several weeks after the committee notified him of their complaint against him and the second was last week.

In this polygraph test, von Ehlinger is asked direct questions about what is contained in the police report with the Boise Police Department.

Here are the questions that von Ehlinger was asked by the same polygraph examiner who has done the previous two tests:

I believe that the examinee is being TRUTHFUL (emphasis Morgons) to the tested issues.

Aaron von Ehlinger showed no significant reactions to the relevant questions detailed above. The absence of reaction is consistent with truthfulness and this examinee should be regarded as being truthful to the tested issues.

Idaho Dispatch hopes to obtain the other information that was recently published by the Associated Press. As a rule, Idaho Dispatch does not simply re-post other news sources’ articles in their entirety. We choose to do our own reporting and use the same public information to write articles that are as balanced and unbiased as possible.

At this time, we are unaware of any public statements made by the accuser or her attorneys that we can use to provide to the public.

Here is the full letter from von Ehlinger’s legal team:

Here is the full polygraph report from Clifford “Chip” Morgon with the accuser’s name redacted: