On December 30th, 2020 Governor Brad Little’s order was that no more than 10 people could gather together except if those individuals were all housed in the same place.

There are exceptions for religious gatherings as well as gatherings of political expression. Social distancing and sanitation guidelines must still be met, however.

Last week, HCR 2 passed the Idaho House on a vote of 55-15 and is now waiting for a hearing in the Senate State Affairs Committee.

Three Republicans and all 12 Democrats voted against the resolution.

When debate on HCR 2 took place on the House floor, Ehardt was the one to open debate on the measure.

Ehardt told the House that,

The right to assemble, to peacefully assemble, whether it is for worship, whether it’s to redress your government, is a guaranteed right irrespective of the fact, whether we are in an emergency situation or not.

Not everyone who stood up to debate HCR 2 was in agreement with the measure.

Rep. John Gannon (D-Boise) told the Idaho House that he voted for HCR 2 in committee but would not support it now because changes to sporting even rules were made. Gannon went on to say,

To just say, ‘Okay, now we’re gonna throw this entire rule out,’ seems like it’s going so far to the other end, other extreme, that it may be having some unintended consequences.

Gannon also discussed lockdowns that had taken place during the Typhoid fever pandemic and gave examples of towns in Idaho that had locked businesses and churches down during that time.

Wood, one of the three Republicans who voted against HCR 2, stood up and said this during the debate,

The ability to limit people gathering is one of the significant tools that we have to limit the spread of communicable diseases. And to eliminate that tool completely I think is inappropriate.

Out of the remaining legislators who stood up to debate the HCR 2, nine legislators spoke in favor of it and two spoke against it.

Below is a screenshot of the vote tally and which legislators voted in favor or against HCR 2. 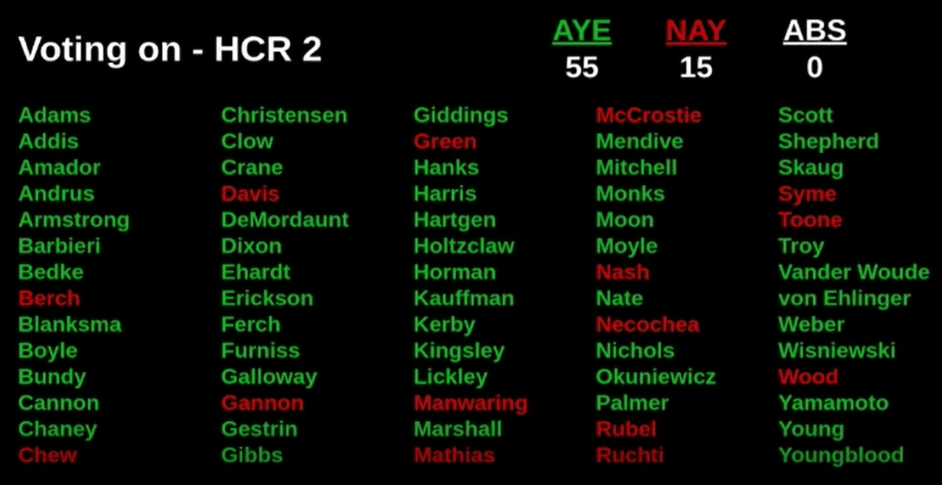