That proposal passed the Idaho Senate with the necessary two-thirds necessary to place it on the ballot in 2022. However, the bill never moved in the Idaho House State Affairs Committee.

Instead, a new proposal was introduced, HJR 4, as an alternative proposal. HJR 4 would require that any changes to Idaho’s controlled substance law require two-thirds of the Idaho legislature to accept the changes to become law.

Yesterday, the Idaho House killed HJR 4 with 42 House members voting in favor of the proposal and 28 voting against it.

Because HJR 4 is a proposed constitutional amendment, it had to receive two-thirds of the Idaho House to pass. That means that HJR 4 needed a total of 47 votes.

The proposal was brought forward by Rep. Gayann DeMordaunt (R-Eagle).

DeMordaunt opened her debate on HJR 4 by saying in part,

This proposed constitutional amendment preserves existing Idaho laws that protect our children, our families, and our communities from the devastating effects of the drug culture. When we consider drug policy in this great state we should do it with the utmost concern for our families, our children, our teens, and our communities. I believe that HJR 4 does just that.

The remainder of the debate was very passionate with legislators on both sides arguing for and against the measure.

Surely, we have the right and responsibility to make the legalization of currently prohibited drugs the object of a very careful and deliberate process. This is a moral issue, completely within the authority of the Idaho legislature to propose, and the people of Idaho to approve. I believe it is the right thing for us to do.

Rep. Ilana Rubel (D-Boise) said that a number of drugs that were recently approved by the FDA were voted on by the Idaho legislature to be removed from the controlled substances list. Rubel said that those drugs did not receive a two-thirds majority that HJR 4 would have required.

Here is what Rubel said for part of her debate against HJR 4,

Going forward, who knows how many essential medications we are going to be denying to the people of Idaho by setting this unrealistically high threshold that we have never successfully met before when removing items from “Schedule 1” and there’s no reason to think we’ll meet them in the future.

Rep. Judy Boyle (R-Midvale) discussed her personal thoughts on the use of marijuana and that she avoided it and encouraged her family to avoid it too. Boyle said that she is a cancer survivor and that her mom, who was hooked on oxycotton, and ended up taking her own life as the family was trying to intervene and get her off of the addiction.

Many of the other legislators who spoke during the debate were in favor of the measure. A number of legislators discussed their generational ties to Idaho and that they wanted Idaho to be preserved.

Here is the final vote on HJR 4: 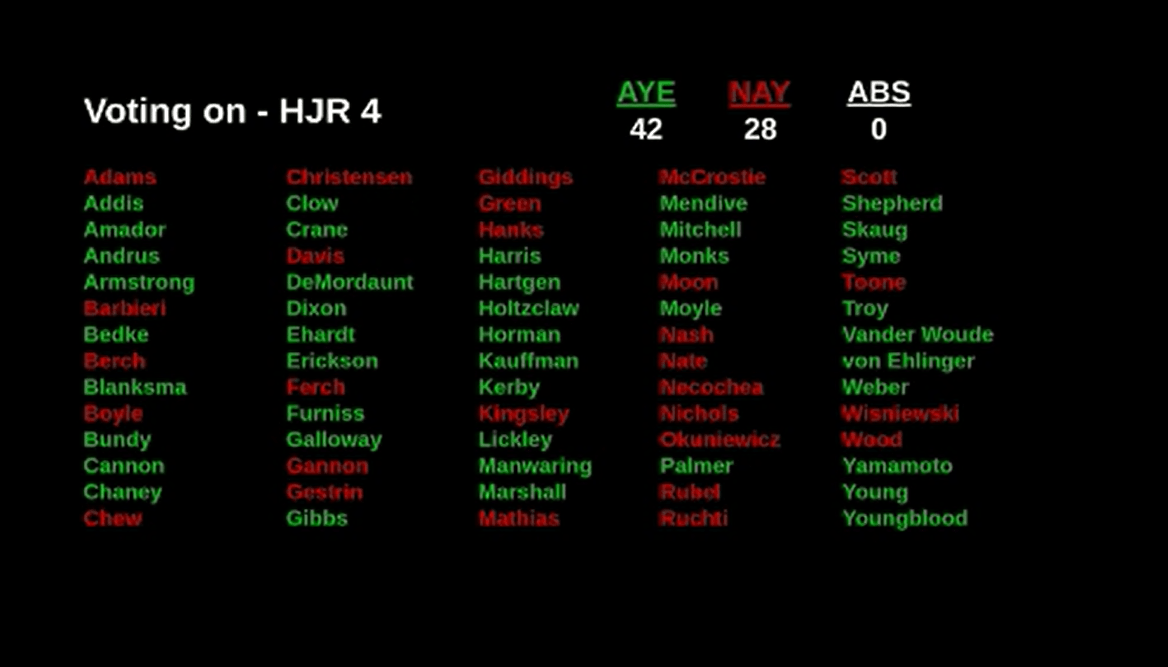