The Idaho legislative session will soon be coming to a close.

On the final day of SB 1110 being on Little’s desk, he signed the bill into law.

The bill also contained an “emergency clause.” That means that rather than going into effect on July 1st of this year like most bills will, the bill will immediately become law.

Several organizations had already begun the process of gathering signatures for ballot initiatives on the 2022 general election ballot.

However, the group says they are going to file a lawsuit over SB 1110 and will push to get it halted in the courts.

A number of lawmakers posted on social media after Little’s signature, expressing their opposition to his signing of SB 1110.

One of the lawmakers who was pushing for Little to veto SB 1110 was House Minority Leader Ilana Rubel (D-Boise). Here is what she posted on Twitter after Little signed the bill:

However, Rep. Tammy Nichols (R-Middleton) posted in favor of SB 1110. Here is what Nichols posted on Facebook: 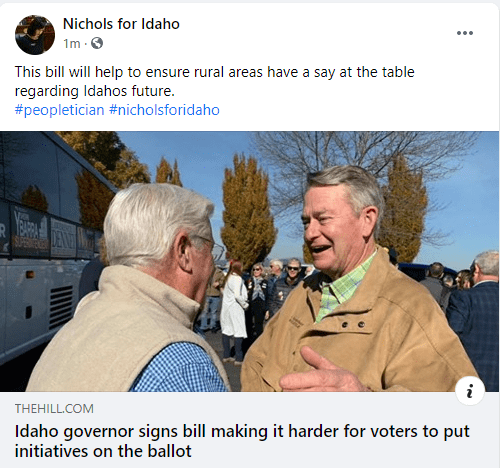 Do you support SB 1110 or do you think Little should have vetoed the measure?