Reactions to the incident in Moscow where three Christians were arrested while singing at the city hall continue.

Police arrested the individuals because they were not social distancing and were not wearing a mask. We wrote an article about the incident that you can review here.

Now, a number of Idaho’s lawmakers have spoken out against Gov. Brad Little and Little has issued a statement about the Moscow incident. 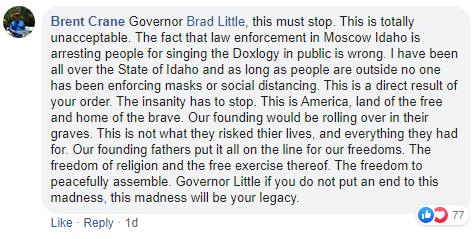 In the statement, Crane took aim at the governor’s order. He says at the end that if Little doesn’t end the “madness” that it will be his legacy.

Crane wasn’t the only one to go after the governor for his Coronavirus response.

Rep. Chad Christensen (Republican – Ammon) also went after Little for the Moscow incident with this statement: 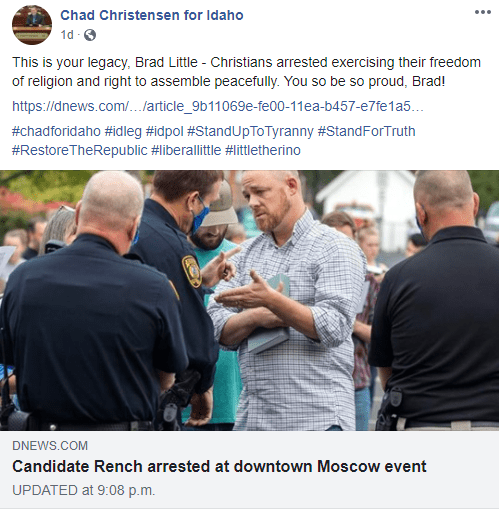 Christensen also mentions the word “legacy” in regard to Little, just like Crane had mentioned in his statement.

Christensen has been an outspoken critic of Little for his Coronavirus decision making. Christensen was one of a number of House lawmakers who voted on a resolution to end Little’s “state of emergency.”

Yesterday, Little released a statement in response to the Moscow incident: 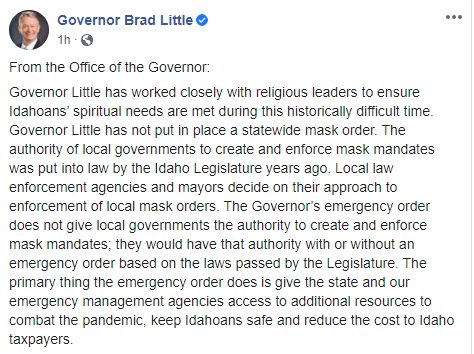 In the statement, Little doesn’t mention Moscow specifically but says he worked with religious leaders to ensure Idahoans’ spiritual needs are met. Little also says that he did not do a statewide mask mandate.

Additionally, Little makes mention of his order which he says did not give local governments authority to make mask mandates.

Little says in the statement that mask mandates are being created by local governments.

What do you think of Little’s statement and the statements by several Republican lawmakers? Were they right to criticize Little or is the Moscow incident a result of local government decisions?

23 thoughts on “Gov. Little Responds to Moscow Incident Where Several Christians were Arrested”