Several days ago, three people were arrested and a total of five people were cited by the Moscow Idaho Police Department for violating the city’s emergency order which requires a mask to be worn in public places when social distancing cannot be maintained.

The arrests have garnered national media attention from sites such as Newsweek and Breitbart. Additionally, media personalities such as Laura Ingram and Tucker Carlson have also addressed what happened in Moscow.

Members of Christ Church in Moscow held a “Psalm Sing” event in the parking lot at the city hall.

The event was planned as a response to the city extending their emergency order until January of 2021 according to Gabe Rench who was arrested at the event.

Idaho Dispatch traveled to Moscow to interview Rench and tried to find out additional information from the city of Moscow and their police department on what occurred.

Prior to arriving in Moscow, we were asked to meet Rench at his “CROSSPOLITIC” studio. I sat down with him for about 15 minutes to discuss what happened.

You can watch the interview below:

In the video, Rench says that he does not feel he was targeted for the arrest. He says that his arrest was likely because he was on the edge of the crowd and it was easier for the police to talk to him.

Rench is currently running as a Republican for a Latah County Commissioner seat which led some speculators to believe he may have been targeted for arrest for political reasons.

Currently, no evidence has been shown to us that suggests that was the case and Rench denies the allegation himself.

Rench said at one point when police were asking him about the people he was standing with, he put his arm around one of his friends and told the police he was just a friend.

Because the order says that you can only be within six feet of someone without a mask on who is in your “household”, Rench was violating the order.

That’s when the police asked Rench to identify himself and he refused to do so. The police then arrested him for violating the order and charged him accordingly.

Only Rench and two others ended up getting arrested during the event which sparked a question from a number of citizens on why they were the only three to get arrested.

In a statement from the city of Moscow, the city claims that “several individuals” were in violation of the order at the event.

From videos we watched that are circulating on Facebook, it appeared that many individuals were closer than six feet and not wearing masks.

It is not possible for Idaho Dispatch to know whether or not these individuals were “household members” or not. However, there are a lot of people standing very close together as you can see in this image here: 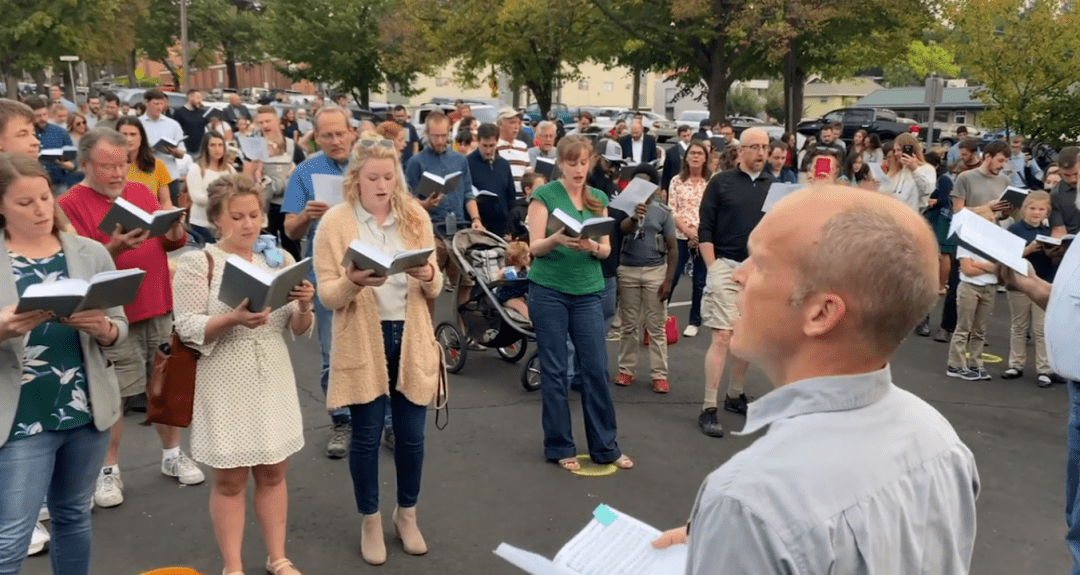 How did the city know and claim only “several” people were violating the order and that some of them were household members? We have seen no evidence to date that the city was able to interview each individual there to find out if they were “household” members.

This was one question we attempted to ask the city but were unable to obtain an answer while we were in Moscow covering the story.

When we visited the Moscow Police Department to ask why only five people were cited, they gave us a card with someone named “Jen” on it. The individual was not anyone working in the police department but was Jen Pfiffner who is the Moscow Deputy City Supervisor.

We should note that the city “Press Release” about this incident is signed by Moscow Police Chief James Fry.

Earlier in the day, I spoke with Pfiffner inside city hall and she handed us a hard copy of the city’s statement on the incident. She also gave her personal opinion that one reason the police may not have arrested or cited more people was the shortness of the event which was allegedly only going to last 15 minutes. With limited police officers on the scene, Pfiffner says that could have been part of the reason that more arrests or citations were not made.

The day before the event began, the city says they cleared the parking lot and made markings on the ground for social distancing.

You can see “dots” on the ground which the city says they put there to “aid attendees in social distancing.” 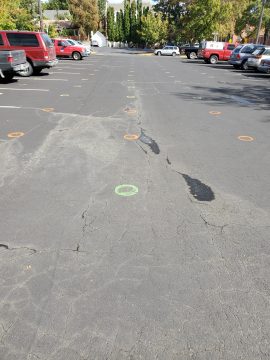 Idaho Dispatch went to city hall and gave a live report (also here on YouTube) on what we had learned up until that point. During that video, we “walked” the distance between the dots, and based on our estimates the dots are approximately six feet from the center of one dot to the center of another.

This means that the only way for the attendees to social distance would be for each person to be standing on their own dot. Another person, even from the same household who was standing next to the person on the dot would be within six feet of someone on another dot. That means that many of the attendees were in violation of the order.

However, only three people ended up being arrested and only five total were cited.

In our interview with Rench, he said that after several hours in jail, the police released him. Prior to him exiting the building, Rench claims that he witnessed two police officers sitting within six feet of each other, and neither had a mask on.

Rench says that he then looked at another officer and asked if he was going to arrest the other two officers for violating the order.

We were unable to get a hold of anyone at the Moscow Police Department who could verify if some of their officers were not wearing masks while also not social distancing inside their facility as would be required by the order.

Rench also says in our interview that Christ Church had already done several of these “Psalm Sings” in violation of the order and that no previous arrests or citations had been made. Additionally, Rench says that he had no intention of getting arrested and was not expecting to get arrested during the event.

We have reached out to the mayor of Moscow, Bill Lambert, as well as the city council for comment but have not yet heard from any of those individuals.

Kingsley sent Idaho Dispatch this response to the incident,

I’m appalled that the city of Moscow can say they are lenient on the mask ordinance and social distancing but decided to pick on Christians worshipping, praying, peacefully assembling, and exercising their religious liberties. From what I understand, not long ago a protest took place and not a single citation was issued. I also have seen photos of Moscow’s mayor at a wedding, . I believe he was officiating without a mask or social distancing.

This has become a nightmare for so many. I implore Governor Little to end this emergency and encourage Idahoans to use common sense. He should encourage them to social distance when possible and wear masks around the elderly or others who are vulnerable.  Mandastes that hinder anyone’s liberties are wrong.

Idaho Dispatch has also reached out to Governor Little about the incident in Moscow but we have not yet received a response.

We did want to address the “wedding” incident referenced here by Rep. Kingsley as well as a number of other citizens who sent us a picture of the mayor at a wedding with no mask on and where he is not social distancing.

First, here is the image in question: 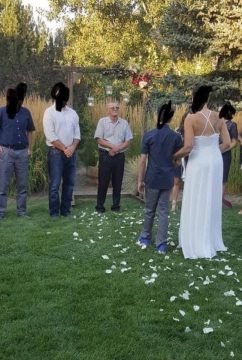 The mayor is the one person in the image who does not have their face “blurred.” We have seen the picture where the faces are not “blurred” and none of the individuals are wearing a mask and they all appear to be within six feet of at least one person.

During a city council meeting on Monday, the mayor addressed this image (29:50 minute mark) and said that it was held on private property which is not covered by the order.

We reviewed Moscow’s order and it does state that the order only applies to events held where the public has access. That would mean that this particular incident would not be in violation of the order if it was held on private property.

This situation in Moscow is the same hypocrisy that has been happening in every leftist ran city across the country. The people upholding pro-American values and exercising their God-given Constitutional rights, are being trampled upon, arrested, and or suppressed by these municipalities for not following mask mandates and or social distancing guidelines, while BLM and ANTIFA are allowed to break almost any law or ordinance they want because their politics align with those who are unfortunately in charge of these cities. It is an outrage that Americans are being dragged out of a church event and arrested for nothing. These leftists must be voted out as soon as possible. I am currently working with other legislators to ensure these infringements on individual freedoms cease and never happen again in the great State of Idaho.

A number of legislators such as Rep. Brent Crane, Sen. Regina Bayer, and others also expressed support for those arrested and have made similar sentiments in recent weeks that changes need to be made to Idaho’s laws to prevent these situations.

Here is the full statement from the city of Moscow on the incident,

On Monday, Sep. 21, 2020, the Moscow City Council extended Amended Public Health Emergency Order 20-03, which has been in place since Jul. 2, 2020. This Order requires non-household members to maintain 6-foot physical distancing when in public or wear a face covering. Any person in violation of this Order may be charged with a misdemeanor. For the full text of this Order, as well as the exemptions, please see:
https://www.ci.moscow.id.us/…/Mayor-Lambert-Public-Health-E…. Since Jul. 2, 2020, Moscow Police Officers have educated the community about the Amended Public Health Emergency Order No. 20-03, have provided face coverings, and have issued written warnings.

On Wednesday, Sep. 23, 2020, the City became aware of a gathering scheduled to be held in the parking lot at City Hall at 4:45 p.m. In consideration of the gathering, the City provided an empty parking lot with ground markings placed 6-feet apart to aid attendees in social distancing. The main speaker at the event was informed that under Amended Public Health Emergency Order 20-03, 6-foot physical distancing was required and if attendees were not able to social distance, then face coverings would be required. The main speaker announced to the attendees that the Amended Public Health Emergency Order 20-03 would be enforced.

Amended Public Health Emergency Order 20-03 was established on Jul. 1, 2020, and extended by Resolution on Aug. 3 and again on Sep. 21. The Mayor has the authority to issue Public Health Emergency Orders by virtue of the Idaho Constitution, laws of the State of Idaho, Moscow City Code Title 1-11-05(B), and common-law authority to protect the public in the event of an emergency.

What do you think of this incident?

Did the police do what they were supposed to do or should they have refused to enforce the order?

Should the prosecutor continue with the charges or drop them completely? Let us know in the comments below.

3 thoughts on “Christian Man Arrested in Moscow Speaks Out”