Following the withdrawal of support and sponsorships of 3 major donors, Boise Pride Festival organizers have postponed the controversial “Drag Kids” event that was scheduled for Sunday, September 11 in downtown Boise.

It began Wednesday with the withdrawal of sponsorship from Zions Bank, who explained that they were unaware of the involvement of minor children in the festival’s events. Upon learning of this information, the company made the decision to withdraw their participation.

Thursday brought the news of both Idaho Power and the Idaho Department of Health and Welfare pulling the plug on sponsoring this year’s festival. Idaho Power cited concerns for the safety of its volunteers and employees in explaining its decision to withdraw. The Director of the Department of Health and Welfare, David Jeppesen, detailed his decision in a letter to Boise Pride Fest Director Donald Williamson.

“…DHW’s sponsorship of Boise Pride 2022 has led to some confusion about whether DHW endorses specific event activities involving minors during this event. To avoid any confusion regarding DHW’s support of such activities, DHW is withdrawing both of its Orange Level sponsorships and Project Filter will no longer be supporting a booth at the event this weekend.”

“While the vast majority of our sponsors and supporters have voiced their support for the Boise Pride Festival and the Drag Kids program, we have made the very difficult decision to postpone this performance due to increased safety concerns. The health and well-being of the kids, their parents, and the attendees of the Festival are our priority.” 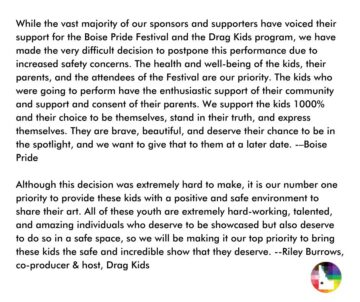 “I appreciate the actions the Boise Pride Festival is taking to protect everyone who will join in their celebration this weekend. I applaud their continued focus on providing a positive, inclusive, community-based event where our LGBTQIA+ friends, neighbors, and family members can come together in celebration and community.”

Another sponsor, Idaho Central Credit Union, acknowledged the programming change on their Facebook page late Thursday evening, but explained that they have still decided to withdraw from the event:

“We are proud of our LGBTQ+ team members and will always look for ways to support them. This pride, along with many of their requests, led us to be a sponsor of the Boise Pride Festival.

We are disappointed in the events and conversations centered around this year’s event. We appreciate the programming change made by Boise Pride, but have made the decision to withdraw our involvement from the event. We have communicated this to the organizers.”

It appears that although the “Drag Kids” show has been postponed, the remaining events scheduled for the weekend will go forward as planned.