House Bill 195, after being sent to “General Orders” was back on the House Floor yesterday.

Rep. Brooke Green (D-Boise) and Rep. Greg Chaney (R-Caldwell) were the bill sponsors. Both said the bill was the result of protests outside of elected officials’ homes over the last year.

Proponents say the bill is necessary to prevent intimidation of individuals in their homes. Opponents have argued that the bill is a violation of the 1st Amendment. 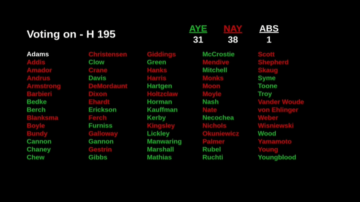 Chaney in his opening remarks said that despite the protests that have taken place at his home in recent days, the legislation was in the works well before that happened. He said the bill wasn’t about him.

Chaney said the bill was an effort to stop people on the “far-left” and the “far-right” from engaging in activities that were meant to harass and scare people inside their homes.

A number of lawmakers stood up and both sides of the issue to debate the bill.

Rep. Julianne Young (R-Blackfoot) argued that there were existing statutes that already covered what Chaney and Green’s bill were trying to prevent.

Another lawmaker, Rep. Joe Palmer (R-Meridian) told a personal story from his childhood when his dad, a police officer, had a gang outside of his home, threatening to kill his family. Palmer said his dad went out and talked with the gang members and eventually the police showed up and arrested some of the individuals and made the others disburse.

In the end, not enough House members voted to move the bill forward.

Do you believe it should be illegal to protest outside someone’s home? Let us know in the comments below.