While the 2nd “Defund the Police” event had less physical confrontations than the previous one, there are still some charges being filed.

Boise police have announced that four juveniles and two adults could face citations or charges for incidents that occurred during the protest and counter-protest in Boise.

No names of the individuals involved have been released. Most of the issues do not seem serious in nature.

However, one woman could face a potential weapons charge.

There were a lot of firearms at the capitol and Boise city hall on Tuesday. Idaho is well-known for the number of firearms owned by citizens.

Despite Idaho’s gun-friendly status as a state, there are still laws that prohibit certain actions with firearms by citizens.

One law that is specifically prohibited is brandishing. Idaho code uses the word “Exhibition” instead of brandishing but the words mean the same thing in this case.

18-3303.  EXHIBITION OR USE OF DEADLY WEAPON. Every person who, not in necessary self-defense, in the presence of two (2) or more persons, draws or exhibits any deadly weapon in a rude, angry and threatening manner, or who, in any manner, unlawfully uses the same, in any fight or quarrel, is guilty of a misdemeanor.

A video posted online does show a woman pulling a gun from her backpack while she is walking and people walking behind her and chants of “All Lives Matter!”

Did the woman pull or exhibit her weapon in a threatening, rude, or angry manner?

First, we want to show you the video we have gotten permission to share. The video is shared with permission from Donny Wilson who recorded the video.

Be advised that strong language is used in the video.

As with many of these videos, the video starts just before the brandishing occurs so it is difficult to know what may or may not have transpired prior to this incident.

In the video, you can see the woman reach into her bag and pull out a firearm.

A number of people online said they agreed the woman brandished a firearm but also criticized the people walking behind her. 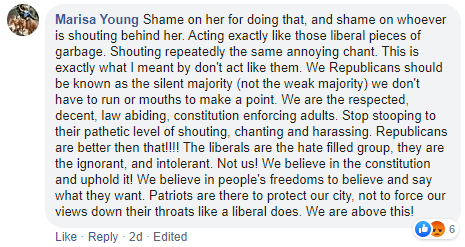 We spoke with Donny Wilson who was the individual recording the incident to get his response.

Specifically, we asked him why the video starts where it does.

There is more to the video. I had to trim the video down so I could send it to the reporting police officer’s phone as evidence. I’m not really that savvy on editing and was just making sure they(police) received the part of the video they needed. I was just recording things as they happened because the last protests lack video from the counter-protest side. We were HOPING to be able to shed some light on the truth about what happens “inside” these protests.

We also asked Wilson why it appears as though they are following the woman in question.

Wilson said they did begin to film her. Here is what Wilson told Idaho Dispatch about why they started recording the woman,

She came across the street, into the side that Mayor McLean had separated for counter-protesters, and was really upset about people waving flags and started antagonizing people, getting into their personal spaces, and yelling threats. I heard the commotion and started filming.

Finally, we asked Wilson if the people right behind the woman chanting “All Lives Matter” were the only ones chanting the phrase. Wilson told us,

No, there were quite a few, although not all. Some prefer not to chant at all, that were chanting. It kind of all stopped when we started to call for the police. It kinda took the attention away as you could imagine it would.

According to Wilson, he is trying to get the full video from his phone to give people more clarity on the situation.

The woman is seen in the video wearing a shirt that says “Please I Can’t Breath, Justice for George Floyd.”

One of the people walking behind her and using a bullhorn is Cin from Idaho Liberty Dogs. Because Cin was part of the counter-protest movement, our presumption is that the woman in question is not a counter-protester.

If Wilson releases the remainder of the video we will update the article accordingly.

We do want to note that some media outlets are discussing an incident where a woman “pointed” a gun at a crowd of people. 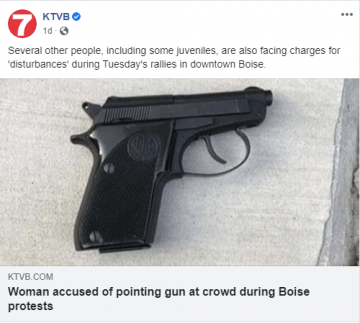 It is unclear if there is another incident that happened. The article from KTVB states that police are alleging the gun was pointed at someone.

However, Wilson told us, and the video confirms, that she did not point a gun at anyone during the incident.

What do you think of this incident? Did the woman brandish a firearm or did she not pull the firearm in a way that was threatening or rude?

14 thoughts on “Video: Woman Brandishes Firearm in Front of Counter-Protesters?”