Earlier this week we traveled to the Smiley Creek Airstrip to cover the visit of Donald Trump Jr. in Idaho.

He was in town for a private fundraiser for President Donald Trump. However, prior to attending the event, he stopped and visited approximately 100 supporters. Trump Jr. was accompanied by his girlfriend Kimberly Guilfoyle for the event.

Idaho Dispatch reached out to the three legislators on September 15th who represent Blaine County, all Democrats, and none of them sent a comment back for this article as of now.

There were approximately 30 counter-protesters against Donald Trump Jr.’s visit but they were not in the same location as the event at the Smiley Creek Airstrip where the footage below is taken.

In this article, we wanted to share some video interviews we did with citizens and elected officials as well as some of Trump Jr.’s comments.

Donald Trump Jr. was well over an hour late to the Smiley Creek Airstrip from when we were told he was going to arrive. However, with high-profile public figures, there is often an expectation that many of these types of events are not going to be on time.

When Trump Jr. did arrive, he spent about 15 minutes talking to the crowd and taking a few questions from them. He also took a group photo and prayed with them.

Here is some of the footage we captured of Trump Jr.’s visit (Our main camera died so some footage is from a cell phone):

First, there were a number of elected officials who attended the fundraiser but only two that we know of who attended the pre-event rally. Rep. Mike Moyle (R – Star) was one individual who attended and Lt. Governor Janice McGeachin was the other.

We spoke with McGeachin about her visit to the Stanley area for the event and you can see her comments in the video below. (Our apologies for the windy conditions.)

We also had a chance to interview Republican Ada County Chairman Victor Miller.

Victor traveled from Boise to Smiley Creek Airstrip for the Trump Jr. visit. Here is what he told us in his interview:

In this video, Miller says that Highway 21 was closed due to fires. We had heard from several people that some Trump supporters were unable to make it to Smiley Creek Airstrip because of the closure.

On the same evening that Trump Jr. flew in, the U.S. Forest Service did post a picture that showed a massive fire right next to Highway 21.

Here is the picture that they posted: 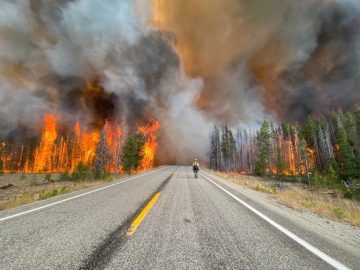 He briefly discusses supporting the re-election of President Trump. Moyle did do a question and answer session but we did not record it.

During that time Moyle discussed the upcoming legislative session and some of the issues the legislature wishes to address.

Here is the video of Moyle’s brief remarks:

Finally, we did speak with a number of Trump supporters off camera but many did not want to be interviewed at the time.

There were a couple of citizens who were at the rally that did agree to do an interview.

The first one was Dawson Lewis. You can see his interview below:

Finally, we also interviewed Dan McKnight. He is the founder of a group called, “Bring Our Troops Home” which aims to bring American troops home from overseas missions.

McKnight told us he was happy with President Trump’s results so far in bringing troops home.

Here is our interview with him:

What did you think of Donald Trump Jr.’s comments to the crowd?

Were you able to attend the event at Smiley Creek Airstrip? Or did you attend the counter-protest that was taking place 15-miles away?

Note: Pictures and videos are the property of Idaho Dispatch.