Idaho’s Sunshine laws are meant to keep Idaho’s citizens informed about who is spending money in politics and what they are spending it on.

Sometimes individuals or organizations are accused of violating these laws. Violations can be cause for fines and criminal charges depending on the severity of the violation.

Recently, Idaho Dispatch was sent information about an alleged violation of Sunshine Laws by Tom Luna, the former State Superintendent of Education.

The allegation sent to us claims that Tom Luna may have been lobbying the Idaho legislature without being a registered lobbyist.

Rep. Priscilla Giddings requested a review from the Attorney General’s office on the matter. She asked that the AG’s office inform her of their findings which we do not believe have been finalized.

What do the allegations by the citizen who requested the Public Records indicate?

Some of the organizations listed are the “Committee for Children,” “Discovery Education,” “Girls Who Code,” and “Project Lead the Way.”

If Mr. Luna did not lobby legislators prior to January 20th then he would not be in violation of the law.

Once Mr. Luna begins working on behalf of organizations to persuade legislators to support or oppose legislation then he must register as a lobbyist.

In the documents sent to Idaho Dispatch, an allegation is made that Mr. Luna was lobbying before registering as a lobbyist on January 20th.

One of the documents sent to Idaho Dispatch is an email from Mr. Luna to Rep. Jerald Raymond. Raymond is a member of the House Education Committee.

Below is an email of Mr. Luna requesting a meeting with Rep. Raymond and Raymond’s response to Mr. Luna. 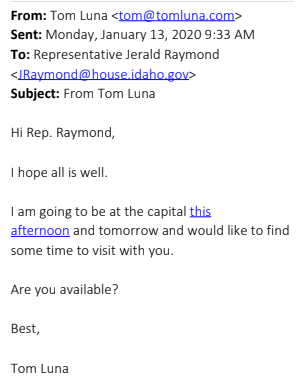 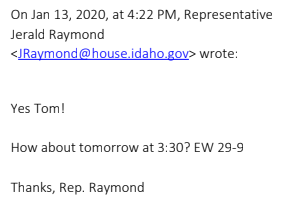 This email exchange itself does not indicate what Mr. Luna intended to discuss with Rep. Raymond and the email alone would not be a violation of the Sunshine laws. Mr. Luna could have simply wanted to chat with Raymond about any number of issues that were not related to legislation and would not qualify as lobbying.

However, Idaho Dispatch talked to several legislators who overheard Mr. Luna discussing his work with the “Committee for Children” and legislation he was working on.

At this time we are told that Public Records Requests are being made for additional information on specific meetings Mr. Luna may have requested. The only email we have currently is the one he sent to Rep. Raymond.

The following day, Mr. Luna did meet with Rep. Raymond and discussed his work with Committee for Children. He also discussed legislation he was working on with the governor’s office according to one legislator, Rep. Tammy Nichols, who overheard the conversation.

“I came into the office area that day and saw Mr. Luna in Rep. Raymond’s cubicle. Rep. Raymond’s cubicle is also very close to mine and while I was working I heard him mention the Committee for Children and something about legislation he and the governor were working on” Rep. Nichols told Idaho Dispatch.

In addition to the email, another document indicates that Mr. Luna testified in the House Education Committee on January 15th, five days before registering as a lobbyist.

Even so, there is no indication in the document that Mr. Luna testified on behalf of any organization. Testifying as a private citizen is his right.

The committee was discussing the Common Core standards and Mr. Luna was giving a history of how those standards came about.

We listened to the beginning of Mr. Luna’s testimony that day and he did not indicate that he was there on behalf of any organization.

This would indicate he was there only testifying as a private citizen.

One document which we have not been able to review yet is the testimony sheet. This sheet is used for committee hearings so the chairman of the committee knows who wishes to testify in the hearing and whether they want to testify in favor of or against a particular issue. On the sheet is a place for people to identify which organization(s) they are testifying in favor of if it is applicable.

The main question then surrounds the alleged lobbying efforts prior to January 20th.

There were ten legislative days before Mr. Luna. While we know he wished to meet with at least two legislators that day according to other legislators who saw Mr. Luna meeting with them that day, we do not yet know if January 14th was the only day in which he met with legislators.

We have reached out to Mr. Luna to ask about these allegations.

He has not yet responded to our inquiry. We will update this article if Mr. Luna does respond.