A suspect has been arrested in the November 13, 2022 murders of four University of Idaho students.

Bryan Christopher Kohberger, a 28-year-old Washington State University graduate student, was taken into custody by Pennsylvania police and an FBI SWAT team in the Pocono Mountains south of Scranton, PA around 3am early Friday morning. 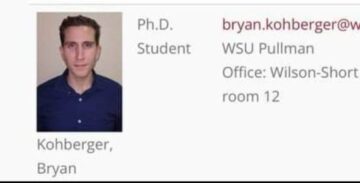 It is reported that he was listed as a PhD Criminal Justice and Criminology student on the Washington State University website, although as of the time of this writing, that page has been taken down.

Kohberger has been charged with four counts of First Degree Murder and one count of Felony Burglary with the intent to commit a crime in relation to the deaths of Kaylee Goncalves, 21, Madison Mogen, 21, Xana Kernodle, 20, and Ethan Chapin, 20.

According to Moscow Police Chief James Fry and Latah County Prosecutor Bill Thompson, Kohberger appeared before a judge for a preliminary hearing Friday morning, and will have another hearing in Monroe County, PA on Tuesday, January 3.

Kohberger was denied bail and will stay in custody. He has the option to voluntarily (while still in custody) return to Idaho to face the charges, or he may insist that Idaho initiate the extradition process in order for him to be returned to Latah County to face these charges. If he opts to be extradited, the process could take an extended period of time.

Because Idaho law states that probable cause affidavits remain sealed until the Defendant is physically present in the County in which the alleged crime occurred, it could be some time before many aspects of the investigation are revealed to the public.

Fry and Thompson held a press conference Friday afternoon announcing the arrest, providing some details, and answering questions. It can be viewed here: https://cdn.jwplayer.com/previews/rqnHDPrC

Moscow Police Department sent out this press release as well: