For the most part, the mask controversies we have seen in Idaho usually stem from whether or not a city or health district will require people to wear them.

However, the message of a mask worn at a state liquor store in Moscow is causing quite the stir.

Please note that the following article is the side of the story from the woman who says she was fired. We have not been able to contact someone at the store, or at the Idaho State Liquor Division, to get their side of the story but have made attempts to do so.

Idaho Dispatch also has no way at this time of contacting the customer who allegedly made the complaint against the employee.

A woman in Moscow, Paige Tilley, says she was fired from her job at the state Liquor Store because she wore her black lives matter mask.

On Twitter, Tilley says that a customer confronted her over her masks on several occasions. Here is the tweet she posted saying she was fired for wearing the mask:

In a message to Idaho Dispatch, Tilley explained a little more about her firing saying,

I worked for the liquor store. I was told my manager was being forced to take me off the schedule and asked me to return my uniform and keys. The message before that was the one I shared on my feed that was sent to my boss. I don’t know for sure it was the deputy director that sent it, I was just assuming because she is the one that told my manager to take me off the schedule. There’s only 4 of us that work there so no one else wears anything political. (Black lives should never be political though and that is the point of all this). I was told the last time this customer complained about me (I was wearing a different political mask) that I “probably shouldn’t” wear my political masks anymore. But as I said, black lives isn’t political.

Tilley mentioned a “deputy director” in one of her tweets and also mentions the individual in her message to us.

Here is what she posted on Twitter (language warning): 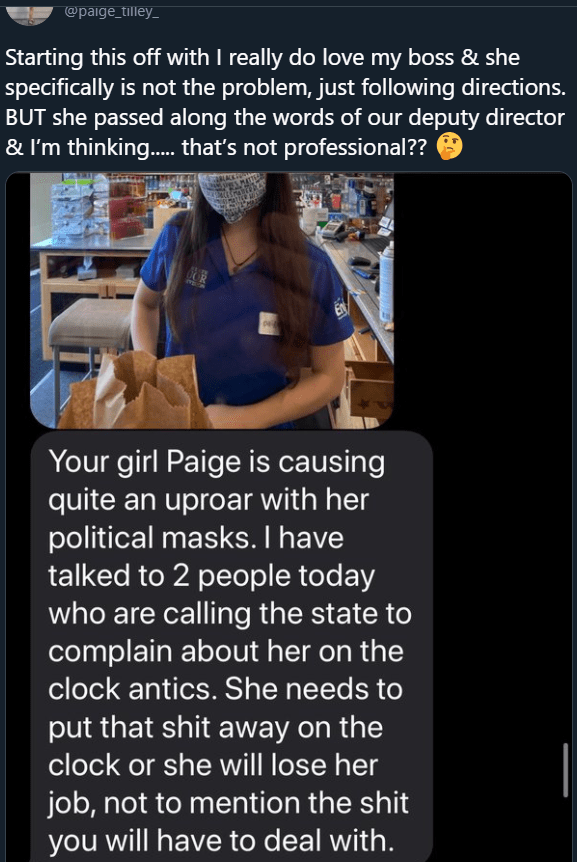 Tilley told Idaho Dispatch that the individual whom she believes is responsible for her firing is Sally Ray.

On the Idaho State Liquor Division website, there is one “Deputy Director” who is female and is over the “retail” operations. Her name is Sally Ray.

When Idaho Dispatch called the Liquor Division, we left a message for Sally to get clarification on Tilley’s story and if she sent the message alleged to have been sent to the store manager.

As for the mask itself, here is what Tilley says she was wearing the ultimately got her fired: 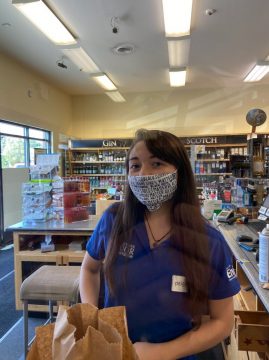 Several messages appear on the mask including “black spaces matter” and “black trans lives matter.” The image above Tilley says on Twitter, was taken by the customer who allegedly made the complaint against her.

The image above can be difficult to see so we asked Tilley for more specifics and she sent the image from the store that she bought the mask from.

We are attempting to find out if the Idaho State Liquor Division prevents employees from wearing clothing or anything on their person with specific types of messages or political messages. Usually, government employees are prohibited at work from doing so but clarification is still needed in this particular case.

For instance, could an employee wear a Donald Trump mask or a Joe Biden mask, or are all masks that are political in nature prohibited?

One particular question that we had for Tilley was about the quote in her tweet that discussed Gov. Little and how she would “make his life hell.” This was her full response to Idaho Dispatch:

By “make his life hell” I really didn’t mean anything too serious about that, I was just mad and tweeting. I was just hoping to bring attention to the fact that the Idaho state government wants to make black lives a political thing and the people of this state deserve to know that. Making his life hell is mostly just all of this “controversy” will be very annoying for him & most people aren’t going to think that’s a good look for their state governor. I’m a 21-year-old, I know I don’t have a lot of power to do much but I can make noise.

We also asked Tilley if she had any prior disciplinary action besides the mask issue and this was her response,

No other disciplinary action. I was told “probably shouldn’t” wear them but other than that nothing happened to me. I worked Sunday when the complaint occurred, and I was fired yesterday. My next shift was supposed to be tomorrow.

Tilley did say that she was warned not to wear masks with political statements on them. We asked her about the mask she previously wore that the Liquor Store had warned her about and this is what she told us,

My other mask said ‘white silence is violence’ and it was considered a ‘controversial face mask’.

According to Tilley, she was warned to not wear masks with political statements on them. Tilley contends that the mask that got her fired was not political in nature.

We asked her if she felt that the mask she was wearing with the words “black lives matter” on it was political given the nature of the organization, and that their fundraising goes through “Act Blue” which is a Democrat fundraising platform.

I can see how black lives matter could be considered political due to those stated facts BUT as you can see in the picture my mask does not strictly say “black lives matter” nor is it in the same font or logo. It is multiple statements such as “black kids matter. Black science matters. Black spaces matter. Black families matter…” etc. it is simply a mask full of factual statements, not tied to the organization of “black lives matter” And again, the point is not that I was fired. The point is WHY I was fired. Which is: a customer took offense to the words printed on my mask and complained to the state about me and they chose to fire me for that mask instead of standing up for their employee who was harassed by an angry man.

Regarding Tilley’s firing, it is unclear if she was fired outside of typical protocols for a state employee or if the warning she received previously was in line with their standards.

That is another question Idaho Dispatch intends to ask about this situation.

What do you think of Tilley’s firing? Was it justified or did a customer and her employer overreact?