Idaho Dispatch has received several questions about the vaccination status of patients at St. Luke’s.

In particular, citizens have asked what defines “unvaccinated” according to St. Luke’s? Because St. Luke’s and mainstream media outlets are reporting that 98% of patients in the Intensive Care Units are 98% unvaccinated, citizens wanted to know if that meant that patients had received no shots at all or had received some of the shots.

Idaho Dispatch reached out to St. Luke’s to try and get some clarification on that particular question.

Idaho Dispatch spoke with Christine Myron by phone earlier today and asked her several questions, including how St. Luke’s currently defines a patient as unvaccinated. Myron, who serves as the Treasure Valley area “Media Contact,” told Idaho Dispatch she would send an email with an explanation of St. Luke’s policy.

Several hours after the phone call with Myron, Idaho Dispatch received an email with a link to St. Luke’s “Key Metric Descriptions” on how the hospital defines unvaccinated.

On the site, you can read a bullet point with the following description:

In the next line, as part of the same bullet point, you will see a “Note.” The note describes the definition of how St. Luke’s defines “unvaccinated.”

Here is what the “Note” says:

According to the above definition, a patient in a St. Luke’s ICU bed would be labeled “unvaccinated” if they have not received both of either the Pfizer or Moderna vaccines and cleared 14 days since their second shot or received the Johnson & Johnson shot and cleared 14 days.

Using the definition provided to Idaho Dispatch, if a patient was in St. Luke’s ICU and had received both Pfizer shots but had received the second shot ten days before hospitalization, that patient would also be counted as unvaccinated.

Here is a screenshot of the specific wording on St. Luke’s site:

In reporting by mainstream media and social media posts by doctors, it is reported that 98% of patients at St. Luke’s in the ICU are unvaccinated. However, it does not appear that any clarification is given on what defines unvaccinated and what percentage of that 98% falls into any specific category.

Dr. Jim Souza, chief physician executive at St. Luke’s Health System, said Wednesday that the St. Luke’s ICU mortality rate is currently above 40%, higher than the 28% rate last December. He said St. Luke’s has six children hospitalized with COVID-19, two of whom are in the pediatric ICU. Souza said 98% of patients in the ICU are unvaccinated. (Emphasis from Idaho Dispatch.)

There is no “Note” or “Clarification” in the article on what that 98% means.

KTVB posted an article regarding the Boise State Football games when BSU planned to require proof of vaccination or a negative test. In the article, KTVB also mentions that 98% number.

Here is what KTVB said in the article:

Boise State emphasized in their statement that vaccinations have been proven to be safe and effective and data shows 98% of patients in Idaho’s ICUs with COVID-19 are unvaccinated.

The KTVB article also doesn’t define what that 98% means. 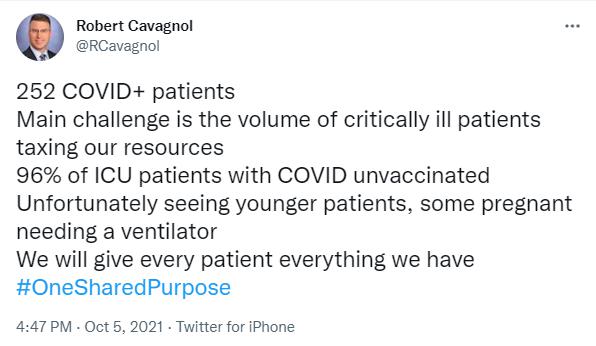 Idaho Dispatch spoke with Zach Brooks, one of the citizens who had questions about the unvaccinated percentage. When Idaho Dispatch informed Brooks of the information St. Luke’s provided, we asked what his main concern was with the numbers. Here is what Brooks told us:

St. Luke’s needs to break these numbers down further. Just calling people ‘unvaccinated’ implies that someone hasn’t received any of the shots. If someone has received both Pfizer shots and it’s only been 13 days instead of the 14 required, St. Luke’s doesn’t feel that it’s necessary to disclose that? We are just going to call them ‘unvaccinated’ and claim that 98% of people are unvaccinated? That seems rather dishonest disclosure when we should be breaking the number down into at least ‘unvaccinated,’ ‘partially vaccinated,’ or ‘completely vaccinated.’ What percentage of the 98% have received at least one shot?

Idaho Dispatch sent follow-up questions asking for the breakdown to Myron, but we have not yet received a reply. Additionally, we asked Myron if someone says they have received the vaccination(s), and it’s been more than 14 days, but the patient does not provide proof of vaccination, does St. Luke’s count them as vaccinated or not?

For now, Idaho Dispatch hopes that the article helps clarify how St. Luke’s is currently labeling which patients are considered unvaccinated and which ones are not.

Do you believe it matters if someone has been partially vaccinated and is counted as unvaccinated, or is it irrelevant?