Boise has a new police chief and some are concerned about where he comes from.

On June 9th the Boise City Council confirmed that Ryan Lee would serve as the new police chief for Idaho’s largest city.

Bill Bones, the former police chief, had announced his retirement in October of 2019. He served 27 years with the Boise Police Department.

Lee will take over as police chief on July 1st but some citizens have concerns about where Lee was hired from.

Primarily, some Boise citizens are concerned that Lee spent much of his career with the Portland Police Department.

At the time Lee was hired by the Mayor of Boise, Lauren McLean, Chief Lee was the Assistant Police Chief in Portland. This would indicate that he was in a position of leadership with the Portland Police Department.

What is the concern with his hiring in Boise then?

The primary issue that some citizens in Boise have with the hire doesn’t appear to be anything related to Chief Lee directly. Rather, some Boiseans are concerned with how the Portland Police Department has handled the unrest that has occurred in the city over the last few years.

A quick scan through the comment sections on local media outlets on the hiring of Chief Lee will indicate a lot of concern from Treasure Valley residents on the hiring: 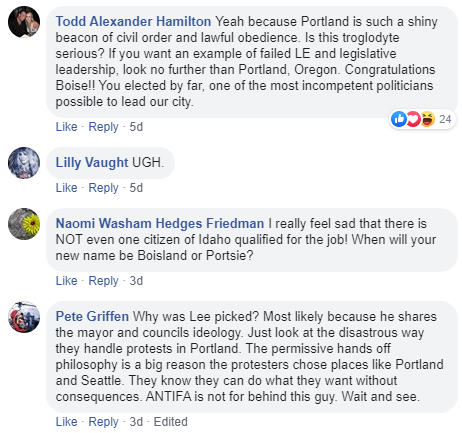 This sentiment about Portland is found in a number of articles and videos online from those who live or work there.

For instance, this video from “Stumptown Matters” shows a journalist who was trying to document the unrest in Portland when he was chased by ANTIFA. They had a can of pepper spray and it is unclear what they intended to do to him if he hadn’t run away.

The journalist did manage to run right into a staging area with several police officers. Yet, the officers made it clear they were not going to help him.

The Portland Police have been criticized a number of times for not stepping in when protests turn violent.

Newsweek reporter Andy NGO has been on the ground in Portland many times to cover the violence that has broken out at these protests.

He wrote an article about the lack of police help for the citizens of Portland.

While Wheeler has borne the brunt of public criticism about Portland police’s “laissez-faire” approach to crowd control, interviews with those at the PPB reveal that Portland’s problems with violent protests stem not from the inadequate leadership of any one person, but systemic and pervasive factors affecting police, government and the city itself.

Andy goes on to say that the Mayor of Portland, Tedd Wheeler, who also serves as the Police Commissioner, wants the police to sit back and not intervene in these tense and oftentimes violent situations.

Andy knows all too well the violence that has occurred at the hands of ANTIFA because he himself was attacked by them.

This video from the Oregonian Live shows Andy being attacked by ANTIFA members.

These are just a few examples of chaos that has erupted in the city over the last few years.

Other groups such as Proud Boys and Patriot Prayer have been in clashes with ANTIFA a number of times as well.

Both sides claim the other started the violence and police are often nowhere to be found in breaking up the violence.

This type of unrest is what some Boiseans are concerned with since the new Police Chief hails from Portland. What level of decision making did Chief Lee have in the policies and practices of the Portland Police Department?

It should be noted that the Portland Police Department doesn’t appear to have the backing of the mayor. This could have impacted Chief Lee’s ability to implement stronger policies against violence at demonstrations.

Will the same type of unrest and violence make its way to Idaho?

Chief Lee recently did a video conference with Mayor McLean and the media in Idaho.

He was asked about the unrest and lawsuits in Portland over demonstrations.

Chief Lee responded that he is officially in Portland until July 1st and can’t comment on anything actively going on. Additionally, he says that his focus is on trying to talk to activists who are protesting and building a relationship with them.

We did find this interview of him discussing some of these protests that have been talked about.

In the interview, he says that his job is to ensure that people can exercise their 1st Amendment rights and to uphold the constitution.

However, he does not address any of the violence that has occurred but says that he hopes people will think about the big picture and what they may not see behind the scenes.

He finishes the interview by stating that the Portland Police Department is one that many other departments look at in handling large-scale gatherings.

Would this be an indication that Chief Lee intends to implement similar policies in Boise when he officially takes the reigns on July 1st?

What do you think about the new Boise Police Chief’s hiring? Let us know in the comments.