Recently, a number of cities across Idaho had citizens who were armed and walking sidewalks and streets in the face of nationwide looting and destruction of businesses.

The armed citizens we talked to supported the protests against George Floyd’s death but just didn’t want to see Idaho experience the same destruction of local businesses that many other states were experiencing.

Idaho didn’t see nearly the amount of vandalism and destruction other states dealt with. Gun owners claimed that their presence was only intended to protect local businesses from looting and destruction.

However, that doesn’t mean everyone was happy about armed citizens standing guard over the town.

Sandpoint Mayor Shelby Rognstad claimed he received “many” contacts from constituents against the presence of armed citizens.

Mayor Rognstad made the claim on Facebook in a June 3rd Press Release where he expressed his displeasure with citizens exercising their 2nd Amendment rights. 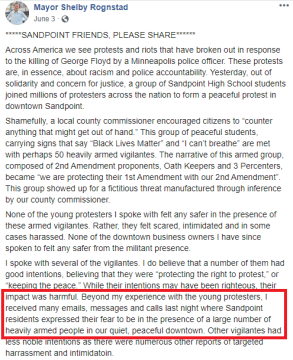 Rognstad claims that he “received many emails, messages, and calls last night” in regard to the armed citizens. It is this claim that a citizen of Idaho wanted to challenge and decided to do a public record’s request.

Idaho Dispatch obtained a copy of that request and the subsequent information provided to us to show how many messages were received by Mayor Rognstad.

The request was made by Drew Rinella of Cocolalla. The town of Cocolalla is approximately 15 minutes from Sandpoint.

From the documents we have, there appears to be a total of six complaints to the mayor about armed citizens.

One complaint was a voicemail, one was an email, and the other four appear to be text messages or Facebook messages to the mayor.

The question is, does this count the entirety of the “many” contacts the mayor received about armed citizens? Or are there messages the mayor has not disclosed.

Because this was an official Public Records Request, it would be required by law that all contacts the mayor received during the time period requested be disclosed if they were about the armed citizens. Mr. Rinella requested the documents for contacts made from June 2nd, the date of the protest, until June 3rd when the Facebook post was made.

Why did Mr. Rinella make the request in the first place? He told Idaho Dispatch, “My goal with this records request was simply to expose Mayor Rognstad’s lie that he received ‘many emails’ and messages on the day prior to his Facebook post condemning patriots for guarding the town.”

Are the six contacts from citizens what Mayor Rognstad considers to be “many?”

So, what would Mayor Rognstad define as “many” contacts from constituents?

The Meriam-Webster dictionary definition of “many” is “consisting of or amounting to a large but indefinite number.” If no phone calls were received, would six contacts from constituents constitute a “large number?”

If Mayor Rognstad is used to never getting contacts from his constituents then perhaps six contacts is a lot in comparison?

The concern of Mr. Rinella is that Mayor Rognstad was using his position to create a perception that there was widespread concern over armed citizens. Did the mayor inflate his contacts that day to instill shame on gun owners exercising their 2nd Amendment rights?

We have sent a request to Mayor Rognstad asking about the records request and have not yet received a response.

This article will be updated if the mayor responds to our request or posts something publicly.