Remember, it’s in times of crisis when we risk losing our liberty most. It’s upsetting how these well-meaning leaders want to expand government and restrict the people. Our health and safety is our responsibility; not the Mayor’s and not the City Council’s. People should do what they think is best for them and their families and resist tyranny—even if the tyranny comes from a place of ‘caring.’

I’m surprised how those who run for office often preach how they know and love the Constitution, but then when faced with an important issue like this one, so quickly abandon Constitutional principles or demonstrate how they never understood the Constitution to begin with.

Governor Little recently said half of Idaho was under a mask mandate.

Despite a statewide order not being in place, some cities are still pushing their own health orders which contain mask mandates and other requirements

Rexburg will vote later this evening on a mask mandate and a health ordinance that would fine businesses that do not enforce it.

Tonight at 6:30 p.m. at the Rexburg City Hall, the city council will vote on Ordinance Number 1243.

Citizens can watch the meeting virtually. A link to the Rexburg City Council site can be found here.

For citizens wishing to voice their opposition or support of Ordinance 1243, you can email the city council at customerservices@rexburg.org or call city hall at 208-359-3020.

A protest is expected at City Hall by a group called “Defending Idaho” at 5:30 p.m. just prior to the city council meeting.

Idaho Dispatch has obtained a draft of the ordinance that will be voted on later this evening.

Under the proposal, businesses will be forced to post the health order for all customers to see.

Businesses will not only be required to post the ordinance but are expected to enforce it as well. Failure to do so could result in a fine for the business. 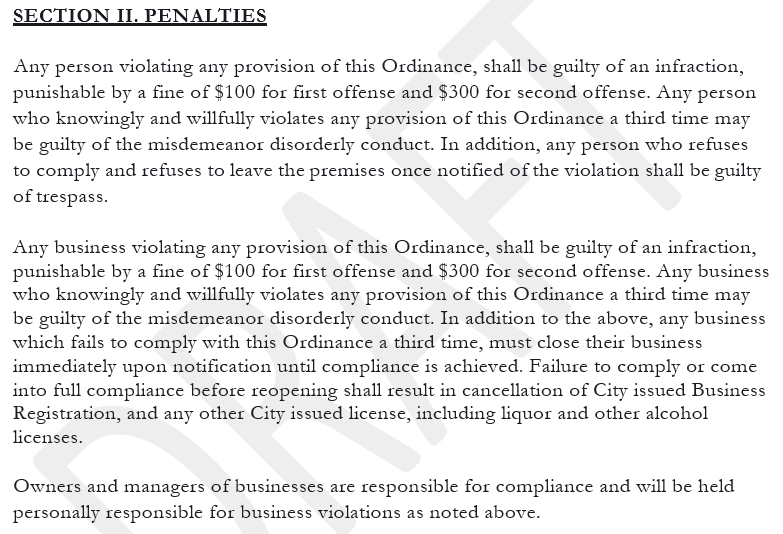 While the first two violations are an “infraction” for the owner or manager of the business, the third violation is a potential misdemeanor which could land them in jail. After the third violation, a business would also be forced to close until they comply with the order.

The city says they understand that the business owner may deal with aggressive customers who refuse to comply but the ordinance still requires businesses to make a “reasonable effort” to get customers to follow the ordinance. It is unclear what level of “effort” a business would be required to use before they face punishment.

Here is the section of Ordinance 1243 requiring a “Duty to Enforce” by Rexburg businesses:

The city says they recognize the business’s constitutional right to “private property.” Conflicts have been seen throughout the country when businesses have dealt with customers who become irate when asked to wear a mask.

Ordinance 1243 says business owners can deal with those customers as they deem “appropriate.”

Here is the remainder of Section 3A:

Do you believe the city should pass Ordinance 1243, vote it down, or come up with a different proposal?