Last month Governor Brad Little signed SB 1110 which made it so ballot initiative signatures had to be gathered from all 35 legislative districts.

The bill had an emergency clause which meant that it took an immediate effect. Several groups fought against the bill, including Reclaim Idaho (Reclaim).

Reclaim has now filed a lawsuit to try and stop the new law and has also launched a new ballot initiative in addition to the one they have already launched.

On Twitter, the group posted an image showing that they had filed a lawsuit to stop the law. Here is a screenshot of their post (story continues below): 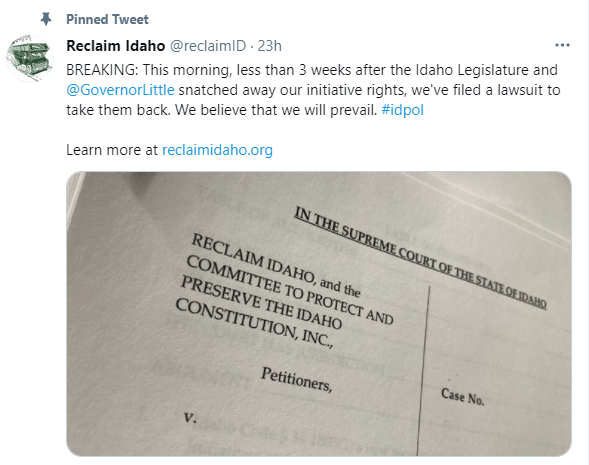 The group has said in recent weeks that the new law makes ballot initiatives nearly impossible and promised to challenge the law in court if Little signed the bill.

Luke Mayville, the co-founder of Reclaim Idaho posted the following Tweet after the group launched the initiative:

Proponents of SB 1110 said that the goal of the bill was to ensure that rural voters had a voice in the ballot initiative process. During committee debate on SB 1110, Senator Steve Vick (R-Dalton Gardens) had told the Senate State Affairs Committee:

We have seen the ballot initiative process used to take away freedoms in several other states such as California, Oregon, and Washington. The process is used often to go around representative government and often you will see groups pushing these initiatives never try to get involved in the legislative process. We do not live in a direct democracy and that is what many of the liberal groups enjoy about the ballot intiaitve process is that they do not have to go through the legislature.

Idahoans need to make sure the same thing that has happened in these other states doesn’t get out of control here too. SB 1110 helps ensure more equal representation across the state of Idaho.

Senate Bill 1110 changed the signature requirement for voter initiative petitions making it more equitable for all persons in Idaho to have a voice as some demographics were left out of the previous process. However, the initiative itself is problematic to our republic as it undermines the legislative branch by taking away control delegated to them (although some seem to be okay with that).

Unfortunately, the initiative process was introduced later in our Idaho constitution as a way to dismantle the republic, by marble cake federalists, but at least this change gives more equal representation.

A handful of Republicans in the House and Senate, plus all Democrats,  voted against SB 1110.

The initiative seeks to raise $200 million for K-12 education funding by raising taxes on corporations and the “wealthiest Idahoans” according to Reclaim.

What do you think of Reclaim’s lawsuit? Do you support or oppose it?