On April 26, 2022, the Humphreys campaign created and released a video through its in-house media company, MacKenzie Platinum Media, LLC, highlighting comments made by Glenn Beck about his prediction that Governor Brad Little would lose the Idaho Republican Primary. Two days later, on April 28, 2022, the Janice McGeachin campaign plagiarized this video and posted it on their campaign Facebook account as well as Ms. McGeachin’s personal Twitter account without giving credit to the Humphreys campaign.

Mr. Humphreys said, “It’s obvious to me that there is a desperate need for fresh ideas in the Capitol. My campaign and my ideas have been plagiarized repeatedly by my opponent. Imitation is the highest form of flattery. This is unacceptable and unethical.” 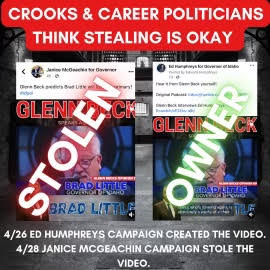