Recently, a political “mailer” made headlines in Idaho that went out from a conservative Political Action Committee regarding State Senator Fred Martin (Republican – Boise).

Martin threatened to sue the group and demanded that they send out a retraction mailer and apologize.

The group responsible for the mailers is called the Freedom Man PAC. Their Marketing and Communications Director is Diego Rodriguez.

In response to Martin’s demands, Freedom Man has said they will not be sending out a retraction mailer and said they would be happy to see Martin in court.

Martin has retained David Leroy as legal counsel and used his office to respond to the mailer. Rodriguez told Leroy’s office that they would be happy to go to court where witnesses and other documents could be brought to light from the 2012 and 2014 incidents at Centennial High School where it was alleged Martin had entered the girl’s bathroom late at night.

Words from the police reports were on the mailer sent out by Freedom Man to voters in District 15.

Here are what the mailers looked like or you can see the full-size images here: 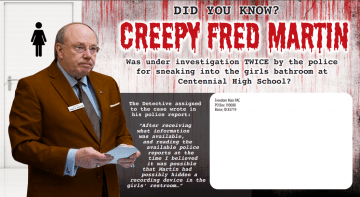 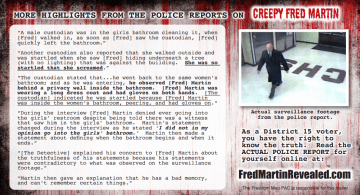 Idaho Dispatch asked Rodriquez why the group waited until now to release the information from the police reports. Rodriguez responded to Idaho Dispatch with the following statement:

It has been six years since the investigation of Martin’s actions inside the school was investigated. In Martin’s letter originally sent to Freedom Man PAC, an officer Tim Brady is quoted as saying this about the end of the investigation,

I have not identified any criminal activity that is prosecutable. This investigation will be closed at this time.

The full conclusion in the police report actually reads as follows:

Martin exhibited suspicious behaviors during two known incidents on the property of Centennial H.S., and he had several inconsistent statements during an interview. At this point in the investigation I have not identified any criminal activity that is prosecutable.

This investigation will be closed at this time, and routed to file.

Freedom Man posted the full police reports on their website and told citizens to read the reports for themselves to determine if Martin was acting “creepy” while at the high school.

Soon after the dispute between Martin and Freedom Man began, another state senator came to Martin’s aid. Sen. Brent Hill (Republican) is the Senate President Pro-Tempore.

Here is what Hill said in the statement about the mailers against Martin:

As a leader in the Idaho Legislature, I cannot stand by while one of my respected colleagues, Senator Fred Martin, is unjustly targeted by devious and malicious attacks. Unscrupulous detractors are seeking to sully the reputation of this dedicated public servant, without regard to truth or the devastating effects such denigrations could have on human lives, families, and the future of our free society.

Political campaigns must address important and complex issues on which there can be disagreements, but we must not tolerate personal attacks, particularly when they are not founded on truth.

Evil abounds, but we need not yield to its vile purposes. We as citizens must not allow deceit and incivility to triumph. We must not tolerate dirty politics as if it were acceptable in Idaho.

We should defend good people who honestly seek to serve with dignity. We must stand up for our dedicated friend and neighbor, Senator Fred S. Martin.

Martin claimed in a post on Facebook that he is under attack from Freedom Man PAC because Rodriguez lost “elections” against him previously and is now attacking him through the PAC as a result of the failed challenges to his seat. Here is a screenshot of the original post: 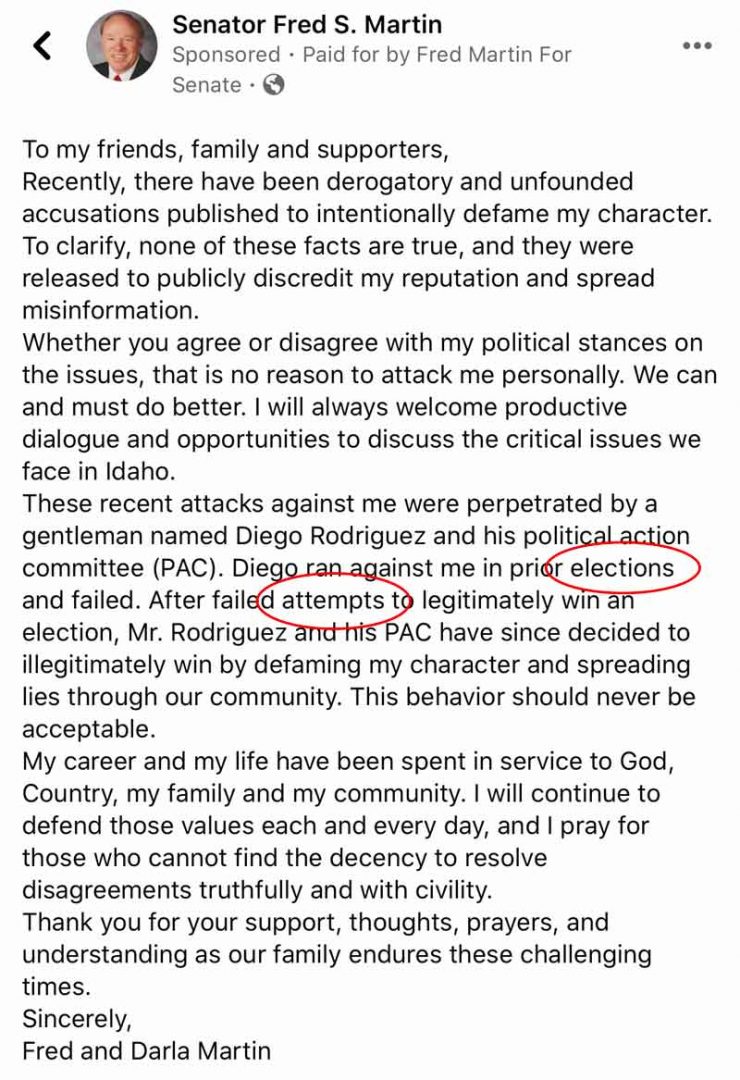 The image above has now been edited on Martin’s page and the paragraph about Rodriguez has been removed. Rodriguez posted a response to this statement where he informed Martin that he only ran against him one time.

Rodriguez has challenged both Martin and Hill to cite inaccuracies in the mailers or other material posted on their website.

Idaho Dispatch sent Martin an inquiry on whether or not they have detailed inaccuracies from Freedom Man PAC and if they intend to move forward on a lawsuit against the group. Idaho Dispatch has not currently received a response but will update the article if Martin responds.

What do you think of this situation?

Did the mailers and material on Freedom Man’s website go too far? Is this information that should be given to voters regardless of the potential outcome?

3 thoughts on “Political Group Says They Will Not Retract Mailers Regarding Sen. Fred Martin”