The Statesman endorsed Democrat Paulette Jordan in her U.S. Senate primary against Jim Vandermaas and presumably they will endorse her again in the general election.

But Jordan was the only U.S. Senate candidate refusing to pledge she won’t commit U.S. troops to foreign wars unless Congress declares war first.

That pledge and his harsh repudiation of “nation building” in the Middle East puts Risch at the forefront of a growing movement to redefine U.S. foreign policy.

As an Afghanistan veteran, I appreciate Risch insisting that if military action is required, Congress do its job first, before asking American troops to do theirs.

So why has Jordan refused?

The Statesman says Jordan will more successfully differentiate herself from Risch this fall. Does that mean she supports sending U.S. troops to fight in more foreign wars?

Gabbard’s recent presidential campaign was defined by her opposition to U.S. involvement in endless foreign wars. An Iraq veteran, the call sign of her campaign was dear to the hearts of many veterans, “Bring Our Troops Home.”

Military Times, in April, reported a new poll finding 73% of veterans supported full withdrawal of U.S. troops from Afghanistan. A YouGov poll in January found 70% of all Americans agreed.

Risch’s pledge followed his comments during a Boise Chamber Q&A in which he repudiated the failed policy of nation-building in the Middle East.

Risch responded to my question by recounting America’s success at building viable democracies in post-war Germany, Japan, and South Korea.

“We’ve been at this now for over two decades, trying to replicate that success in the Middle East, and what do we have to show for it? A goose egg…If you’re going to give somebody a gift of democracy, a free market system, human rights, of basic rights stated in our Bill of Rights and Constitution, they’ve got to want it, and if they don’t want it, it doesn’t matter how much you shovel at them, it isn’t going to happen.”

“We’ve spent $2 trillion now in Afghanistan,” Risch said, “and we’ve shed lots of American blood there. I’m with you. I am through trying to do nation-building with countries that don’t want it. They’ve got to show some type of appreciation, some type of embracement of it, and they simply don’t.”

There’d be no stronger demonstration of the President’s promise to put America first than to bring our troops home right now and end these ridiculous wars.

Dan McKnight, Meridian, served eighteen months in Afghanistan with the Idaho Army National Guard. He is the founder and chairman of BringOurTroopsHome.US. 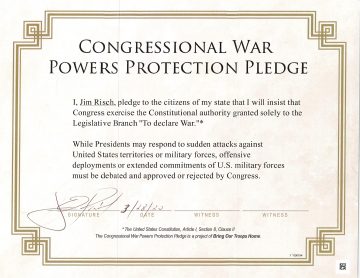 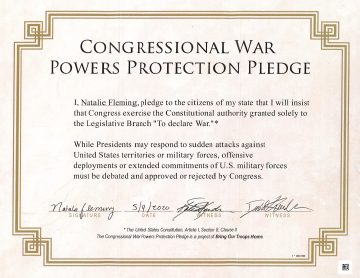