The following Op-Ed was submitted by Shelley Brock. Note: Op-Eds do not necessarily reflect the views and opinions of those at the Idaho Dispatch.

In recent months, oil industry representatives have launched an aggressive PR campaign designed to curry favor with the public and media over controversial Idaho drilling operations. Their attempts to politicize the issue and discredit citizens who express concerns over the well-documented threat oil and gas extraction presents to residential communities, private property rights, critical water resources and public health are straight out of the industry’s playbook.

Their frustration with this reported $160 million investment is understandable. In the decade plus since modern drilling started here (after 85 years of commercial failure by larger companies) the never-ending promises of massive riches for taxpayers and royalty owners, and countless jobs this industry was suppose to deliver have never materialized.

Outdoor recreation contributes a reported $7.8 billion to Idaho’s economy annually according to Idaho Business for the Outdoors (IBO).

Oil and gas operations bring transient out-of-state workers for temporary labor, but render only a literal handful of permanent jobs. Representatives recently lauded that they “currently provide five full time local jobs and will add a sixth field position soon” (along with a few vendor jobs).

In contrast, Idaho agribusiness contributes 123,100 jobs (1 in every 8), according to the most recent University of Idaho Extension report published by the IFBF.

Idaho outdoor recreation supports 78,000 jobs and $2.3 billion in wages and salaries per year, according to statistics from the IBO.

Agribusiness and outdoor recreation are major drivers of Idaho’s economy. Their lifeblood is clean, abundant water from our aquifers, rivers, lakes and reservoirs. Why in the world would we risk sacrificing our greatest bounty and our children’s heritage to an unsustainable industry that has done nothing but cost Idaho taxpayers money and has contaminated air, soil and water resources with alarming frequency across the globe?

Citizens are paying dearly for an out-of-state corporation and a few wealthy large landowners — including public officials from the highest office on down with personal investments in the business — to benefit financially. What other industry would be allowed to operate here in “fiscally conservative” Idaho while draining taxpayers of millions of dollars? What’s in it for us?

We’ve seen multiple lawsuits by homeowners forced to allow drilling under their property, against their will, and by angry landowners who alleged they were cheated out of their royalties by operators who then filed for bankruptcy. We’ve seen countless complaints of bullying by landmen and seismic crews; conflicts of interest between the industry and regulators; illegal lobbying, unpermitted drilling procedures and pumping of toxic chemicals underground through our drinking water aquifers; dishonest production reporting and downplaying the scope of their operations. Officials admit the industry has been allowed to write their own rules, and proposed 2023 legislation will strip even more protective rights from property owners. The fox doesn’t just guard the henhouse; he is allowed to build it.

Corporate profits and government overreach should never supersede the sanctity of our constitutional freedoms or the preservation of our property rights, our irreplaceable water resources and our right to be safe and secure in our greatest lifetime investment – our homes. Idaho’s future should never be for sale. 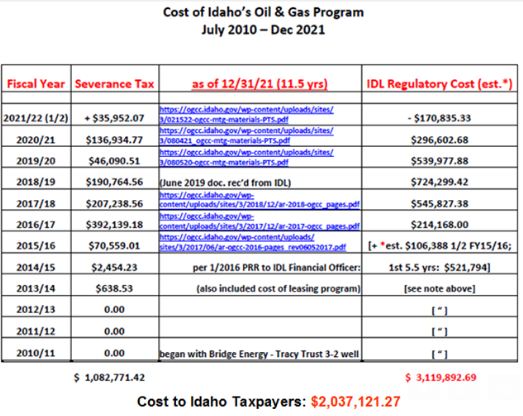 Shelley Brock is a longtime Idaho resident; health-care professional, community justice advocate and grandmother. She is Board President of the Idaho grassroots non-profit Citizens Allied for Integrity and Accountability and is a candidate for the Idaho House of Representatives in District 14.

7 thoughts on “Op-Ed: Idaho’s Future Should Never be for Sale”