Several months ago the Idaho Statesman Editorial Board released a piece where they attacked “Disobey Idaho” protesters.

The board disagreed with the protests which were held to oppose the government lockdown of Idaho’s economy during the Coronavirus pandemic.

The Idaho Statesman argued that the lockdown was working. Here is what they said in part:

The issue here is clear. Saving lives must be our first priority. The actual facts show the medical experts were right. The stay-home orders have worked. Lives have been saved. If the protesters really want to help the people of Idaho, as they say, they should go home and stay there.

From this portion of the piece, we can see that the Idaho Statesman felt strong about people staying home to save lives. They argue that it is the best way that the “Disobey Idaho” protesters could have helped Idahoans.

The Statesman also says that Idaho will bounce back economically. Following that statement they said this:

What we can’t bounce back from? A widespread outbreak of COVID-19.

The “Disobey Idaho” protest was done peacefully and without the burning down or looting of local businesses. But the fact that they were done peacefully was not the concern of the Idaho Statesman Editorial Board. No, their concern was that too many people in close proximity would create a spike in the Coronavirus.

A spike, by the way, which never came to fruition after the protests had been done.

Nearly two months after the protest in April and no evidence exists that a spike came from the “Disobey Idaho” protest despite the close proximity of protesters and the fact that many of them didn’t wear masks.

However, the Idaho Statesman saved its biggest criticism of Idahoans who wanted to protest businesses losing their livelihood by describing them in this way:

Not to be left out, here we have Idaho, or at least a group of Idahoans who, like a temper-tantrum-throwing child upset that they have to go to bed early because Mom and Dad said so, want in on the action.

In other words, if you care about people not getting sick from the Coronavirus and you also don’t want to see people lose their businesses and go hungry, you are a temper-tantrum throwing child who should be locked in your room for a time out.

That’s an interesting take from the Idaho Statesman Editorial Board.

Okay, let’s fast forward to the George Floyd protests and see what concern the Idaho Statesman Editorial Board has about the Coronavirus now.

The Idaho Statesman has run zero pieces from their Editorial Board that discuss the George Floyd protests/vigils in which thousands of people were crammed near the capitol and where many also didn’t wear masks.

Not one mention from their newspaper about it. Of course, they did write a piece about counter-protesters and those who were armed to ensure that Idaho’s cities didn’t come under attack from rioters.

Many of the people who went to the protest in Boise and other cities support the efforts of people who oppose George Floyd’s death. They just didn’t want local businesses to get burned down or looted as a result.

If other cities around the country, including some in our neighboring states of Oregon and Washington, were not experiencing looting and rioting, then maybe the Idaho Statesman has a point. But, by the time the Idaho protest happened, cities across the country were burning and looting was widespread in many states.

As a result, many Idahoans had concerns that similar things were going to happen here.

Now, I wouldn’t agree if someone went to a peaceful protest and tried to disrupt it or create contention.

Everyone has a right to peacefully protest and speak their mind, to air their grievances, and to express their frustration with injustices.

The media in Idaho has tried to paint anyone who went to towns in Idaho with their firearms as people who don’t care about peaceful protesters. Yet every gun owner I talked to that went to cities like Lewiston, Coeur d’Alene, and Boise did so because they didn’t want to see looting and violence break out. All of the people I talked to agreed with the protesters that the killing of George Floyd was wrong.

They just wanted to ensure that looting and burning of businesses didn’t occur.

Again, looting and rioting were spreading all over the country and therefore a reasonable concern for many Idahoans is that someone would try and start something in our state. Don’t expect the media to acknowledge that fact though.

The Idaho Statesman Editorial Board instead focused on the few counter-protesters who were trying to disrupt the George Floyd protest.

And certainly don’t expect the Idaho Statesman Editorial Board to mention the fact that 5,000 people crammed themselves near the capitol, that the Coronavirus is still a thing, and that the George Floyd protest would still have been prohibited by Gov. Little’s guidelines and even the Mayor of Boise’s guidelines.

Interestingly, the concerns of Coronavirus by the media in Idaho disappeared for about a week while people protested the death of George Floyd.

Of course, now that their bias has been exposed, and the protests are dying down, it’s time to get back to the Coronavirus.

Here is a screenshot of the Idaho Statesman’s online front page right now: 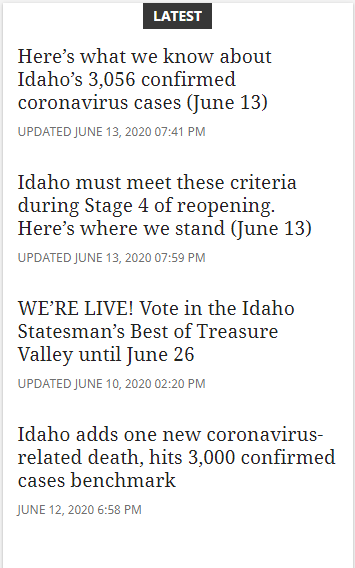 Three of their four “Latest” articles are on the Coronavirus including one new death in the state.

No mention of a “spike” in cases that may come from the George Floyd protests? Nothing. Nada. Zilch. I went through the three articles and searched for the words “protest” and “Floyd” and got zero hits on those words.