This report is intended to expose some disappointing actions, to put it mildly, by two different titans of Idaho politics:

During the 2022 legislative session, House Bill 693 was passed in the House with a 37-33 vote on March 7th. On the Senate side, the bill was assigned to Senator Patti Anne Lodge’s State Affairs Committee on March 8th. 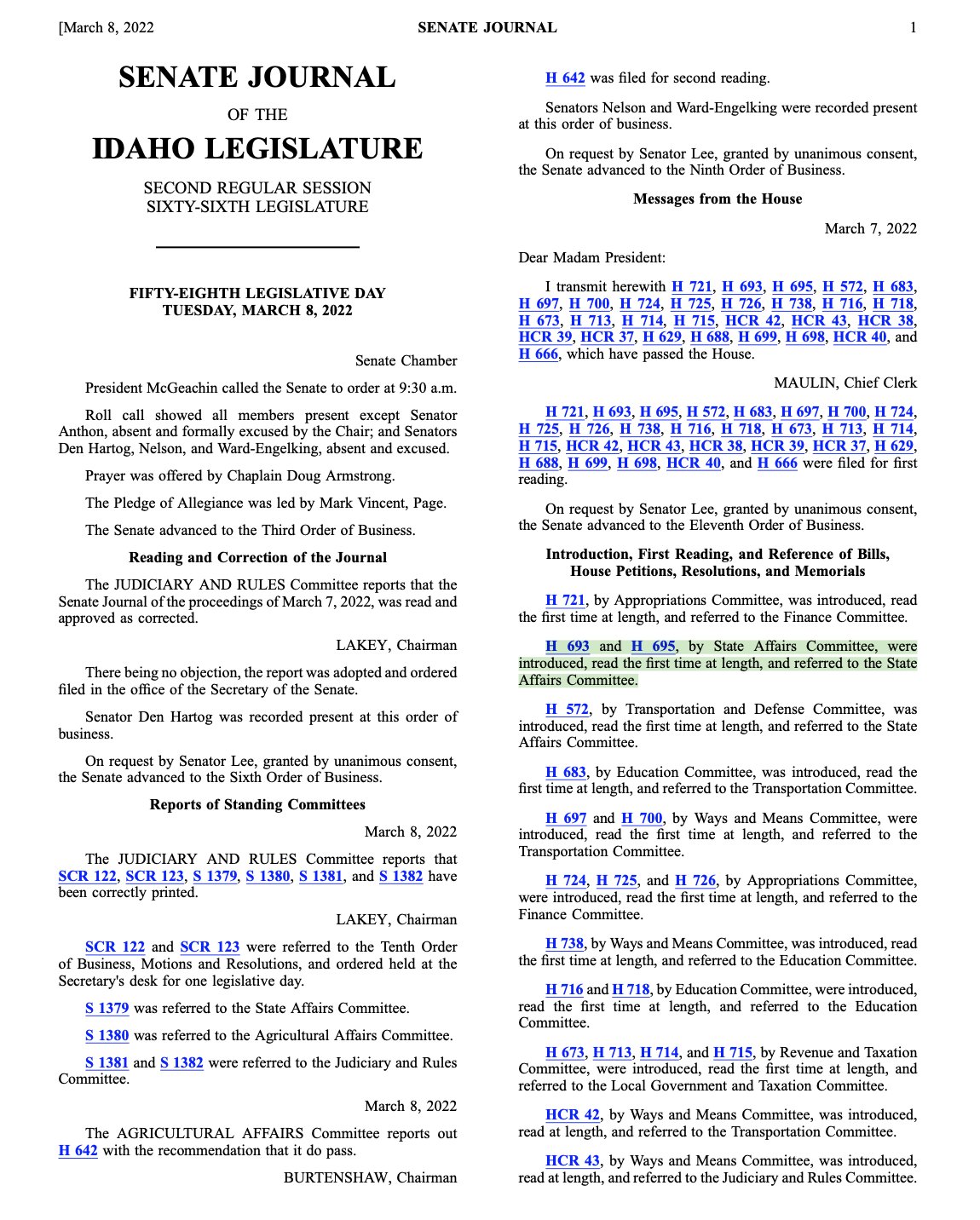 This bill was simple, it added one line to the Idaho statute on absentee ballots. Lines added to existing code are inserted and underlined as seen here. https://legislature.idaho.gov/sessioninfo/2022/legislation/H0693/…

“The use of drop-off boxes or similar drop-off locations to collect absentee ballots is prohibited.” 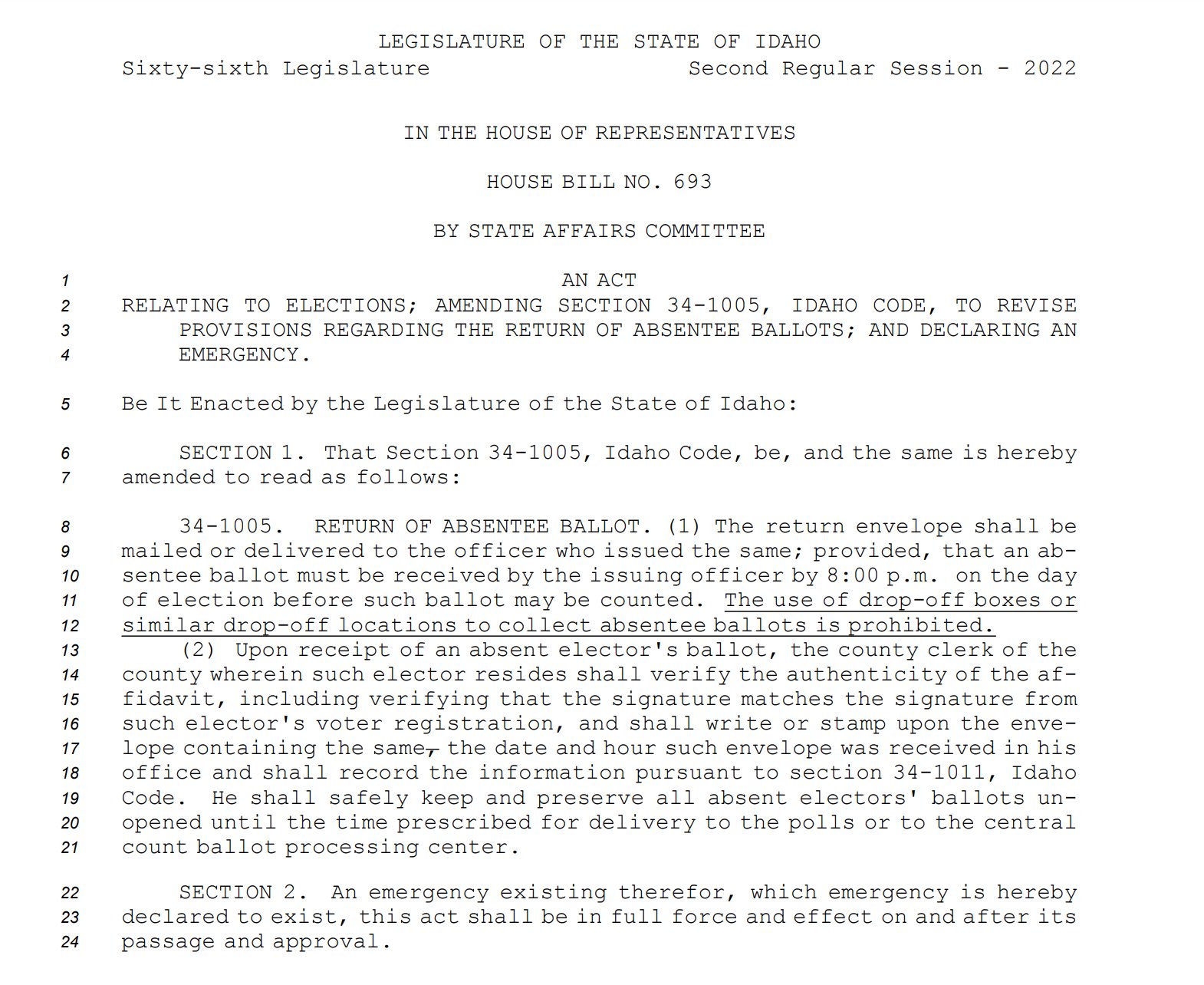 Essentially, it banned ballot drop boxes for elections in Idaho. These are the boxes made infamous by national election investigators with evidence of ballot stuffing operations that may have impacted the integrity of various elections across the country. (Topic for later time.)

This drop box bill was among several other election integrity related bills sitting in her committee, as well as the House approved “Unmask Idaho” bill (H0631) that prevented all government agencies from mandating the wearing of face masks. (Again, a topic for another time.)

Senator Lodge was reported to have told the Associated Press that she received emails opposing the legislation from elderly, disabled, and people with children that can’t wait in line to vote, that they want Idaho to continue to use drop boxes. Bill Banning Ballot Drop Boxes Is Dead in Idaho Senate (usnews.com) Senator Patti Anne Lodge claims she received thousands of emails. Thousands. As part of an organization that rallies people to connect with their lawmakers to voice their opinion on legislation, we at Citizens Alliance of Idaho found this claim of “thousands” to be a remarkable accomplishment if true. In fact, I personally delivered over 1800 signed petitions collected in just 2 weeks from real people that supported passage of the “Unmask Idaho” bill that was stuck in Senator Lodge’s committee. We posted a picture at the time of me delivering those petitions to Senate leadership. 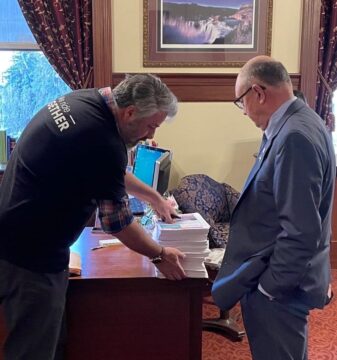 Well, we decided to fire off a Freedom of Information Act style records request for these “thousands” of emails that Senator Lodge and her committee received in opposition to the bill. We even requested the emails that were in favor of the bill.

In fact, we requested all emails that even mentioned House Bill 693 or the words “ballot drop boxes.” We wanted to hear what the “voice of the people” was telling Senator Lodge when it came to this hot-button issue.

When the request was granted, we cleared space on a hard drive so that we had enough room to download the thousands of documents. We made sure the computer doing the download wouldn’t go into sleep mode and time-out the download.

To our surprise, once we opened the answer to our request, the attachment downloaded immediately. It was a simple PDF containing eleven emails. 11 emails retrieved that were sent to Senator Lodge.

The state of Idaho was only able to recover eleven (11) emails total, for or against, out of the “thousands” that Senator Lodge claimed to have received in opposition to the ballot drop box prohibition bill. But it gets worse, folks.

Five of those emails were from the same person. Someone called “Watch Man” who forwarded 5 articles or newsletters opposing the bill without any of their own comments or feedback. Which means that there is feedback from only SIX people.

Another person was neither for, nor against, the bill as their email was simply caught up in the dragnet of the search because the bill number was referenced in a lawmaker’s newsletter that was forwarded. So we can drop that person from the list. We are now at a total of FIVE.

Of those five people, four were actually in FAVOR of banning drop boxes and voiced their support of bill H693 in the emails they sent. Notice though, these came in AFTER the news reported her “thousands” in opposition claim. Anyway, now we are really down to just one email left.

Here it is friends. The final person left was the only person who wrote an email to Senator Patti Anne Lodge expressing their personal opposition to H0693, among other things. We went from “thousands” to one, just like that. 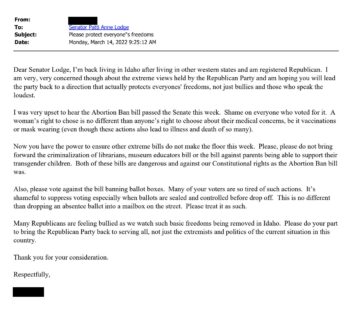 It should be disclosed that the Legislative Legal Counsel who fulfilled our records request included the following disclaimer “…these are the records that Senator Lodge possessed as of the date of your request—not every record that she may have received during the session.”

Because of the absence of a records retention policy, Senator Lodge may have simply ?? the rest of the “thousands of emails” she received before receiving our records request. But why hold on to these eleven (or one)?

One may also want to ask when would she have had time to rid herself of thousands of emails when she was busy out on the campaign trail this election year. Mind you she wasn’t campaigning for herself, she was retiring after over 20 years in the State Senate.

This eleven term Republican State Senator, Patti Anne Lodge was actually out there publicly campaigning for the Democrat candidate for Attorney General. But, I digress. Let’s continue, shall we? 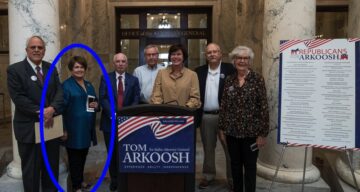 By now, I imagine some of you aren’t surprised by this news. In fact, some legislators I talked to privately about this are not surprised at all either in what Senator Lodge publicly claimed.

Politicians such as Senator Lodge will routinely make off-the-cuff statements or offer little-white-lies to substitute for making more complicated arguments or provide cover for the underbelly of politics. But there is a butterfly effect to these actions.

When Senator Lodge made this claim to KeithRidler of AP, many of Idaho’s leading news organizations TheIdahoPress, EastIDNews, CBS2Boise, KTVB picked it up and reported it widely. Lending weight to her argument that the bill was unpopular and not wanted.

The casual reader of this news believes the public sentiment is solidified. Even if it did pass the House, there was an intense public outcry and Senator Lodge’s apparently false claim proves it. Therefor she would not allow the bill to be debated in the Senate.

Is this how our legislative process should work? One chamber passes a bill and a lawmaker in the next chamber doesn’t like it, so they use the press to create a false narrative to justify the death of the bill?

The fact that KeithRidler took Senator Lodge at her word isn’t too surprising, but wow, what a huge scoop for this now aging retired reporter. Potentially thousands of human interest stories related to one of the biggest stories in the country, election integrity, ignored.

Then there are local news wires that simply copy & paste from the AP whatever is sent out without verifying it. In an age of fake news & misinformation, shouldn’t our local news sources be looking out for their readers by verifying what the AP puts out? It’s Official: the Associated Press Is ‘Fake News’ (townhall.com)

The average family who’s just trying to get by, trying to stay informed by at least checking the headlines as they head out the door to work or school, don’t have the time you or I do, to fact check every little thing a lawmaker says. We expect the reporter to do that job.

Well friends, now what? The first thing to do is to expose these people by publishing reports like this. In doing so, we hope to put all politicians on notice, especially those who have enjoyed as long a career in politics as Senator Lodge has.

When you make remarkable claims, you better be telling the truth, or you will be revealed and rightfully shamed. We are bringing the receipts.

In the spirit of full government transparency, the next thing would be to discuss the creation of a record retention policy for lawmakers. Should there be one, and what should it look like?

Finally, you the reader have much work to do. For if we are to preserve our values for the next generation here in Idaho, we must have citizen legislators that understand how to honor the constitution, respect their voters, and welcome accountability.

Lawmakers and reporters must be accountable. Asking questions is reasonable and it’s a moral duty. Thomas Jefferson said,

“Question with boldness even the existence of a God; because, if there is one, he must more approve of the homage of reason, than that of blindfolded fear.”

It is up to us to hold truth to power and bring accountability. #WeRideTogether

This Op-Ed was submitted by Matt Edwards of Citizens Alliance of Idaho and originally published on Twitter. Op-Eds do not necessarily reflect the views and opinions of those at the Idaho Dispatch.