The price of gasoline has gone up significantly since January. Many Idahoans have taken notice. With many of us vacationing, prices around the country are also being noticed. July 26rd gas national average is $3.156/gal, while Idaho average is $3.736/gal. Policies from the Biden Administration are responsible for the increase of petroleum prices, a major contributor to the price of gasoline. Our State has also contributed to the higher than average gas prices.

Idaho doesn’t have the highest gas tax in the Union. California does. We stand at the 20th spot, or nineteen other states have higher gas taxes than Idaho. We took this distinction since 2015 when the state gas tax was hiked from $0.25 to $0.32/gal. But the other nineteen states have oil fields and refineries. Idaho doesn’t. The additional transportation and distribution costs bump Idaho to one of the top ten states in gas prices.

But a state in the top ten in gas prices doesn’t guarantee efficient spending. A quick inquiry reveals that gas tax revenues go to maintain roads and bridges, or the Transportation Bill (H 362). It sounds plausible, but not entirely true. I would like to defend this argument in my next article.

It is ironic that in 2020, the overall tax collected went down for Idaho. The massive influx of federal funds for the Emergency Covid Declaration made up for the difference. To the point that instead of a deficit, the State of Idaho has an $800 million in surplus. That amount, for now, paid for the deficit in Transportation Bill. (Op-Ed continues below.) 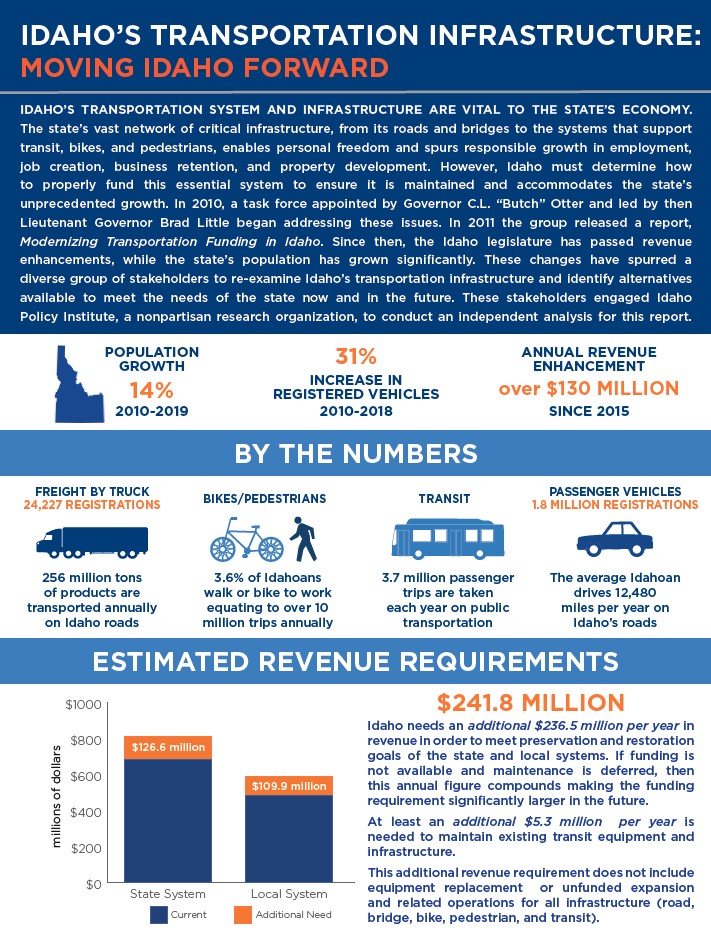 Still, the pressure for more gas tax revenue continues. Last year, Boise State University and the Association of Idaho Cities reported that an additional $241.8 million per year is needed to maintain our roads and bridges in the current condition. If they are right, more money for Transportation is needed every year. When the Legislature passed H 362, the General Fund supplemental of 1% Sale Tax in 2019 was increased to 4.5% in 2020 forward; or from $15 million to $80 million per year.

This was an attempt to fill the ever-increasing gap between the perceived needs with resources. Note that the supplemental from General Funds does not add up to $241.8 million. They will be returning every year, asking for more.

In addition to that, gas tax revenue is projected to shrink in the future. Advancement in technology means that gas-powered vehicles will be more efficient… use less gas. Electric vehicles don’t consume gas at all. Their solution is either to raise the gas tax or establish a mileage fee—vehicles are taxed based on the distance traveled. Both proposals will be unpopular. The latter will also increase the bureaucracy needed to run it. A concept that is quite contrary to the virtue of how EV was sold to the populace.

So, what is the solution? It is not straightforward. It will involve how the funds are used, which I will attempt to answer in my next article.