Like him or not, the Trump momentum is moving smoothly along. One just needs to take a look at his rallies to see what I mean. The attendance is “yuuuge” and the energy is amazing!

I have been to two Trump rallies now. One in 2018 and then this year outside of Reno, Nevada (I also attended his inauguration). If you have never had the opportunity to go to a Trump rally, I say do it if you ever get the chance.

The rally in Reno was interesting on its own. For starters, rumors were circulating that the rally was canceled three days before it was scheduled to happen, and that it was courtesy of Gov. Sisolak (which his office denies). However, the event remained posted on the Trump campaign site but without a location. I had friends in Nevada who were telling me that another location was being looked into and to stand by. The Friday before the event, a location was finally confirmed and I hit the road! Because of the lateness of the location and even more speculation that the rally might not still occur, I was a bit pessimistic at first about attendance and how many would show up.

The day of the event as I approached the Minden-Tahoe Airport near Reno, I saw cars from several states: Idaho, Nevada, California, Washington, Oregon, Utah, etc.… and then, cars, hundreds of cars to my left and to my right, parked right off of the freeway. People in their red, white, and blue, and in their Trump swag walking to the charter bus pick up area, or just making their way to the airport by foot. I could tell there were a lot of people, but just how many was still unknown.

I was able to get in early and went through a back area. Again, I saw a sea of people that never seemed to end. I was feeling pretty hopeful at this point that the turnout was going to be really good. I got in and found my place and waited. A couple of hours before the event was scheduled to start, the gatekeepers unlocked the gates and the thousands rushed in. I sat and watched as excited attendees hurried to try to get seats up front. Before I knew it, the whole front section was filled and a continual wave of people continued to flow in. In a matter of minutes it seemed, thousands filled the two sides of the outdoor airport. The crowd was so thick that when I decided to go find a restroom, I quickly changed my mind because I couldn’t get through, no matter how bad I might have wanted to.

I enjoyed watching the people in attendance from my observation point. Friends and family, new acquaintances being made, young and old, all colors with their signs and chants (I especially like the one that said “peaceful protester”). It was very entertaining to watch, people having a good time, excited, happy to be out and about, and ready for President Trump. You could feel the excitement and it immediately took me back to the 2018 rally I attended.

President Trump landed in Reno but then had to take a 50 min drive to the airport where we were all waiting for his arrival. Local speakers (former Nevada Attorney General, several state candidates and state Trump campaign organizers) addressed the crowd as we waited. When the motorcade finally pulled up, the crowd became even more excited, and you could feel it in the air! Several times I glanced around at the crowd, and was in awe of how many thousands of people were there. I found out later that more were outside listening that didn’t get in. I never did hear final numbers, but I know it was thousands.

President Trump took the stage and began. He covered topics such as mail-in ballot voting, Joe Biden, the economy, the fires, China, and the ongoing pandemic. He spoke for nearly an hour and a half. Of course, it was done in Trump-style with nicknames and all. He also criticized Governor Steve Sisolak’s current directive on crowd restrictions due to the coronavirus. Calling him “politically motivated,” Trump says “he tried to stop us. He couldn’t.” and called the rally several times a “peaceful protest”.

I am always amazed at how long the President can speak, the energy he gives out, and the entertaining factor, nothing like the other party rallies. The people love President Trump regardless of what the mainstream media tries to portray. This is clearly evident at rallies such as this, and especially evident with one that was literally put together and announced less than 48 hours prior to the actual event. Literally thousands of people came from all over and were thrilled to be there. The President ended his speech and then quickly left the stage as he had another rally to attend the next morning near Las Vegas.

I had an amazing time at the rally and was so happy to again see and hear our President speak of his love of country, God, people, and freedom. Idaho is Trump country and we will elect him to another 4 years.

Here are some images I took at the rally: 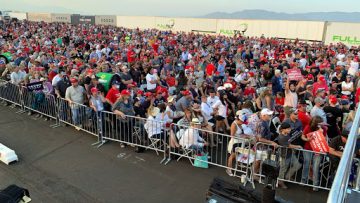 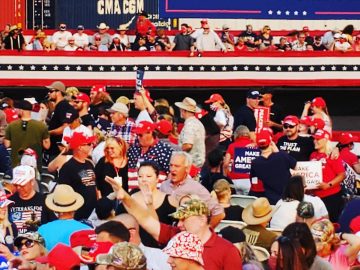 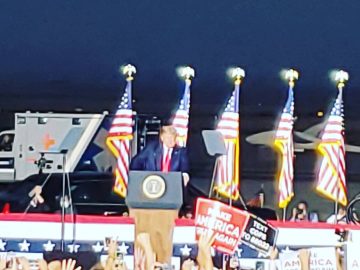 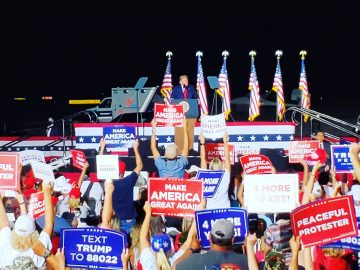