Casey Whalen was the organizer for an event yesterday called, “Open Carry if you Care” in Coeur d’Alene.

Whalen is a well-known political activist in northern Idaho and runs a YouTube channel called “North Idaho Exposed.” He also put on a rally earlier this summer called “Liberate America.”

However, before yesterday’s event, Whalen was arrested for a “failure to appear” at a recent court date where Whalen did appear but refused to wear a mask and the court denied him entry for doing so.

Several months ago Whalen was charged with a misdemeanor for removing signs from Honeysuckle Beach in Hayden. The actual citation was for “Falsifying, Mutilation, or Concealing Public Records, or Written Instruments.”

You can see a YouTube video posted on April 21st of Whalen setting the sign down on the ground off to the side of the road.

The signs posted were from the Kootenai County Sheriff’s Department. They indicated that those who came to Idaho from out of state must self-quarantine for 14-days upon arrival.

Here is a picture of one of the signs captured in a screenshot from a YouTube video posted by Whalen: 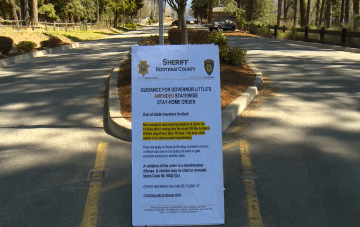 In one video posted on YouTube, Whalen says he ended up taking the signs from Honeysuckle Beach and put them up at the sheriff’s office instead. Whalen claims in the video that he did not damage the signs but simply moved them from one location to another.

The video on YouTube (posted on July 15th) shows Whalen setting the signs up at the sheriff’s office in the rain. It is unclear what day Whalen actually set them up but it was earlier than July 15th since his court date was on July 14th.

The video then cuts to Whalen going to appear in court on July 14th but he refused to wear a mask upon entering the building for his court appearance.

The time from Whalen leaving the courthouse without standing before the judge to yesterday is approximately six weeks.

Generally speaking, when a defendant does not show up for a court appearance a warrant is issued for their arrest. It is unclear at this time why Whalen was not arrested until the day that this event was supposed to take place.

We have sent an email to the Kootenai County Sheriff’s Office for clarification on why they chose yesterday as the day to arrest Whalen. We have not heard back from the sheriff’s office but will update our article if they respond.

The arrest warrant is listed at August 20th from the Kootenai County Sheriff’s Office website as you can see in the image below:

The event in Coeur d’Alene took place even without Whalen in attendance. Approximately 200 people attended the event according to several individuals who were there.

Whalen posted another video late last evening after he bailed himself out of jail. He said he hoped the event would be a way to help bring the community together.

In the video, Whalen says he is due in court again on November 2nd.