Recently a convicted felon named Jerry Glass Jr. (pictured above) had allegedly stolen a vehicle in Washington state and drove away from a traffic stop.

There was also a warrant out for the arrest of Glass by the Washington Department of Corrections.

Glass was allegedly shot and killed by Daren McCann, the owner of a cabin in Nez Perce County. There are some details that still need to unfold in this story but we want to give you the information we have so far.

For some of the backstory, here is what is alleged to have happened.

Glass was stopped at a traffic stop in Whitman County which is located in Washington state. Eventually, Glass fled the scene and crashed the stolen vehicle.

He then fled on foot, leaving his wallet behind.

Glass then allegedly broke into a cabin in Idaho. A Nez Perce County Sheriff’s deputy was checking on the area and was searching for Glass.

The deputy was the only one in the area at the time according to Sheriff Rodriguez who spoke to us about the incident.

At some point, Glass allegedly broke into another cabin.

The cabin was owned by Brian McCann. McCann allegedly heard about Glass being in the area and went to check on his property.

According to the Nez Perce County Sheriff’s Office press release, McCann began walking down the road together with Glass to get cell service.

It is unclear at this time why Glass and McCann were allegedly walking together.

At some point during that walk, Glass allegedly shoved McCann to the ground and fled into the woods.

That is when McCann allegedly shot at Glass as he was fleeing.

According to Sheriff Joe Rodriguez, McCann called 911 and informed the sheriff’s office about what had happened.

They found Glass deceased with a bullet wound.

What remains unclear is what happened from the time McCann found Glass in his cabin and what led to him being pushed to the ground. Those details can now only be given by McCann himself.

Here is the full press release from the Nez Perce County Sheriff’s Office: 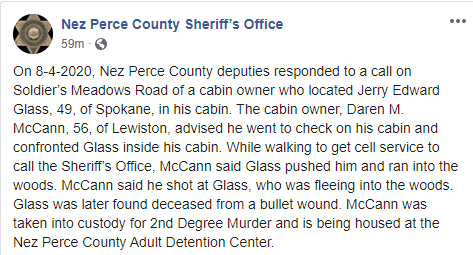 We will try to release more details on this story as it unfolds.