The Idaho Statesman, says the game was canceled at halftime because of threats called into 911. Idaho Dispatch reached out to the Caldwell Police Department for comment on the alleged calls and what specific threats were put out against the school. The law enforcement agency has not yet responded to our request.

It’s also possible Caldwell High School officials called off the game at halftime due to a dispute with Ammon Bundy over the face mask issue.

Bundy, whose son plays for Emmett High School, refused to wear a mask when asked to do so prior to entering the stadium.

Bundy told the Idaho Dispatch that after the school refused him entry for not wearing a mask, his kids and his in-laws that were with him walked over to the fence outside the stadium. He said that he had also offered to pay to watch from outside the fence but the individuals running the ticket booth would not take his money.

He also told Idaho Dispatch that he had been to several away games already this year and this was the first time he was denied entry for not wearing a face mask. Bundy said that he was not expecting to have any issues going into Caldwell High School to watch his son play and that he was unaware they had such a policy in place.

While the Southwest Idaho Health District, which oversees the Coronavirus response for Canyon County, has not mandated masks in Caldwell, the school district has. The school’s policy requires fans to wear masks on school property, even when adhering to social distancing guidelines.

In addition to our discussion with Bundy, Idaho Dispatch also spoke with the parents of one Caldwell High School student who plays on the football team and was in attendance for the game against Emmett. They wished to remain anonymous for fear of retribution against their child.

The parents told Idaho Dispatch that during the game, parents and other spectators were required to don face masks for the duration of the football game. They said the school also deployed staffers to secure mask compliance from parents and fans.

Bundy, meanwhile, never gained entry to the match. Instead, he watched the game from outside the stadium’s perimeter, which is guarded by a chain-link fence.

During the ordeal, Bundy posted several live videos on Facebook at the time detailing what was happening at the game and the location of these videos is outside the perimeter fence and next to the main parking lot at Caldwell High School.

In one video, Bundy is seen talking to the Emmett High School football coach Rich Hargitt who was inside the stadium and not wearing a mask. Idaho Dispatch has not yet determined if coaches, players, and staff members are exempt from the mask-wearing mandate during games.

Hargitt then informs Bundy that the game was going to be “called off” because the superintendent “wants something done” but the coach does not clarify what the Caldwell superintendent may have meant.

Bundy also says in the video that if they do cancel the game that it is worth it in the fight for freedom and asks the coach when he is going to stand up for freedom. The conversation only lasts for approximately a minute and a half before the coach walks away.

Bundy told Idaho Dispatch that the conversation with the coach was at halftime. Shortly after that conversation, the game was called.

A separate Facebook video shows spectators coming out of the stadium, some heckling Bundy. This is the last video that was posted by Bundy while he was at the game. 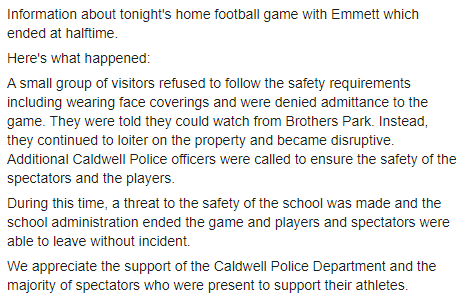 Idaho Dispatch sent several follow up questions about their statement.

In particular, the statement claims that the “visitors” became “disruptive” and Idaho Dispatch wants to understand why the school district believes Bundy’s actions were disruptive to the game and spectators.

From the videos Idaho Dispatch has witnessed so far, Bundy and his family members appear to be standing outside the fence and not interacting with anyone other than each other or school officials or police officers who approached them. The videos that are posted do not show Bundy disrupting the game or fans.

The Caldwell Police Department did not arrest or cite Bundy for any disturbance. The police do tell Bundy in one of his videos that if they school files trespassing charges that they are not going to physically remove him but they will file the paperwork for the charges. No mention is made from the police officers in the video that Bundy is being a disturbance to the game or to the fans.

Idaho Dispatch asked Bundy specifically if at any point when he and his family walked over to watch the game at the chainlink fence, did they go back and talk to anyone else. Bundy told us that he went back to the ticket booth one time to try and pay for his group standing outside the fence and the individual working at the ticket booth refused to take their money.

Idaho Dispatch asked the anonymous parents from Caldwell if they saw what was happening outside the fence Bundy and his family.

The parents informed Idaho Dispatch they did not know and that no one in the stands seemed to know what was happening. Additionally, the parents told us that it was difficult to see anything outside of the stadium because of the bright lights that are used to light up the field. It was these parent’s opinions that the crowd was focused on the game.

The parents Idaho Dispatch spoke with said that they had no idea Ammon was outside the fence until they were leaving the game.

The Caldwell parents Idaho Dispatch spoke with said they did not see or hear of any disturbances during the game.

The parents told Idaho Dispatch that they had seen the principal go up to the press box just before halftime but did not know exactly why she was there.

Then, at halftime, just as the band finished playing, the parents said someone came on the loudspeaker and told the spectators that the game was canceled due to a “safety concern.” They said that the announcer had urgency in his statement. The announcer also said to make sure that spectators were social distancing as they left the stadium according to the parents.

He said that the only time anyone seemed concerned or panicked during the game was when the announcer made that announcement.

We should note that these are the only parents Idaho Dispatch has spoken to about this incident and we did so because they reached out to us.

What do you think of this situation?