Recently. Congressman Russ Fulcher released a statement on the results of the U.S. presidential election.

Congressman Mike Simpson however has been silent on the matter as of this writing. Republican elected officials across the country are debating whether or not to speak out in favor of or against what President Donald Trump has said about the results.

Politico, Fox News, the AP, and most major media outlets are now projecting the election for Joe Biden.

These statements were released prior to the AP, Fox News, and Politico announcements.

Here is what McGeachin said in her statement: 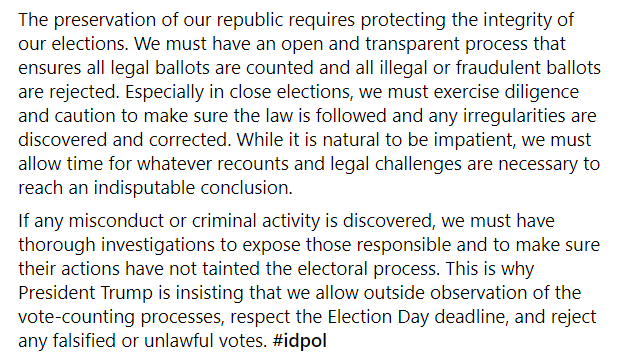 All votes should be counted in accordance with state laws and procedures. Counting every legal vote is vital to our nation’s core principles. The integrity of our election process is equally imperative, and the courts should resolve any alleged improprieties. I have faith in the democratic process and my fellow Americans to accept the final, certified results.

Again, these statements were released prior to Biden being announced as the winner. Rudy Giuliani, part of Trump’s legal team, has announced that lawsuits are being filed in several states.

What do you think of the presidential election results? Let us know in the comments below.

Please note that the media does not determine the next President of the United States. There is a legal and specific process for that determination through the Electoral College which will vote next month.

Update: We changed the headline from “announced” to “project” which we felt was a more accurate description of what the media announced.