Lt. Governor Janice McGeachin was questioned today in the Joint Finance and Appropriations Committee meeting over one of the hirings she has done as part of her staff.

The Lt. Governor’s office is authorized a total of three staff members. One of the positions is vacant and the question for McGeachin was whether or not the position needed to be filled.

McGeachin fills one of those spots and her “Chief of Staff” fills another spot.

The vacant spot is currently being contracted out to Parrish Miller of Designs by Parrish.

Part of the question is whether or not Parrish Miller should be hired because he also contracts with the Idaho Freedom Foundation as an analyst. Miller is an IT Contractor and has contracted with many companies including Idaho Dispatch during its launch.

Sen. Janie Ward-Engelking questioned McGeachin about the vacancy and asked whether the funds were necessary if the position was going to be left vacant. Ward-Engelkins said in part of her testimony,

I guess I’m concerned about a conflict of interest in using taxpayer dollars to hire a policy analyst for [the] Idaho Freedom Foundation. So maybe you can alleviate some of my fears or concerns about that.

Idaho Dispatch reached out to McGeachin and asked her about her contract with Miller. Additionally, we asked whether it was cheaper to hire Miller as a contractor than to hire him as a full-time staff member.

I wonder why certain JFAC members aren’t more concerned with the fact that I have voluntarily complied with the Governor’s holdbacks and have actually reverted almost 10% unspent taxpayer dollars than who I choose to employ, whether contractually or as a full or part-time employee. In my view, it would be a good thing if all state agencies would revert 10% of their budget back to taxpayers. Some budgets, like Medicaid, are spiraling out of control and threaten our funding for education. It seems frivolous to focus on a less than $190K budget.

I have had a contractual agreement with Design by Parrish since Jan 2019 to provide professional technical services. he is very good at what he does. It is absolutely more efficient to contract with him than to have him employed due to the additional payroll and benefit costs.

Representative Berch (D15) has twisted the truth. Parrish does not have a desk in the Lt. Governor’s Office.

McGeachin’s last statement about Rep. Steve Berch (D-Boise) was in direct response to a post Berch made on Facebook.

Berch expressed his displeasure with McGeachin’s hiring of Miller. He also made a claim in the post that Miller has a desk in the Lt. Governor’s Office.

The image below is a screenshot of Berch’s post: 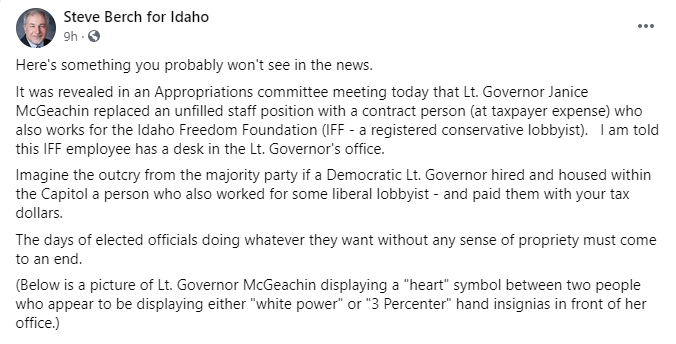 McGeachin in her statement above denies that Miller has a desk in her office.

Idaho Dispatch sent McGeachin a follow-up question about the agreement she has with Miller. Our question to McGeachin was whether or not she felt there was a “conflict of interest” as discussed by Ward-Engelking because of Miller’s work with the Idaho Freedom Foundation and the work she has in overseeing the Senate and working as the Lt. Governor.

Not at all. My role as the President (of the Senate) is to conduct the business of the Senate and to protect decorum. I do not vote on legislation unless there is a tie vote. Having served as a State Representative for ten years, and having served as a Committee Chair of a sometimes contentious committee, I understand how to read legislation and I do not need to be advised on policy when it comes to protecting and preserving our sovereign rights as Idaho citizens.

Do you believe that Miller’s hiring is a conflict of interest for the Lt. Governor?

Let us know what you think in the comments below!

Be sure to become a monthly contributor to Idaho Dispatch for as little as $2.97 a month to help support our effort to bring Idahoans unbiased and balanced news! Simply go to IdahoDispatch.com/donate today. 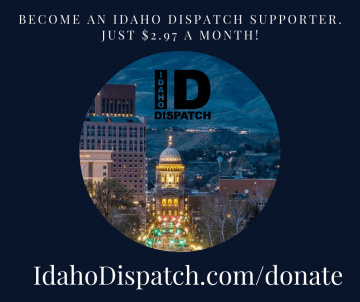 One thought on “Lt. Governor McGeachin Questioned Over IT Hiring”