UPDATE #3: The Boise Police Department has released the following statement about tonight’s CDH protest and the events at elected official’s homes:

Boise Police had a large number of officers at tonight’s Central District Health board meeting. Due to the large crowd size, concurrent reports of protestors causing disturbances at or near the homes of board members, a disturbance inside of the meeting, and other significant calls for service, BPD requested the CDH meeting adjourn in the interest of public safety.

Due to the totality of the events, there was concern that officers would not be able to maintain public order. Officers priority was to deescalate the situation and not create an environment where officers had to use increased force. We also had to ensure we had resources available to adequately respond to needs across the city.

What happened: Boise Police were on scene at Central District Health and had information that some members of the crowd intended to disrupt the meeting by forcing their way in the building.  At the same time, officers received reports of protestors at some board members’ homes and immediately responded. They found evidence that indicates protesters were at a minimum of three different board members’ homes. Investigators have identified some of the people involved and are securing warrants for their arrest on charges of disturbing the peace in the neighborhood.

Also tonight CDH trespassed one person from inside their building after that person refused to follow CDH rules. Officers attempted to gain voluntary compliance from that person, but the subject refused to leave and was placed under arrest by a representative of CDH for misdemeanor trespassing. BPD took custody of the citizen’s arrest and took the subject to the Ada County Jail.

UPDATE #2: Governor Little has issued the following statement regarding the protests outside the homes of elected officials on his Twitter account:

UPDATE: One of Commissioner Lachiondo’s staffers responded to our request for comment.

Mr. Pruett, this is Diana’s campaign staffer. We will be offering [a] longer statement, but certainly not to you. Take care.

The Central District Health Board met once again tonight to discuss and vote on a potential “health order.”

Tonight’s vote was an amended version of a previous health order proposal discussed last Friday. One major adjustment was the removal of a prohibition on youth and adult sports.

However, the meeting was canceled at the request of the Boise Police Department and Mayor Lauren McLean who said for safety reasons they wanted the meeting adjourned.

You can catch our live stream of the protest here.

It was unknown to us at the time why it was canceled but soon after we heard that for “safety” reasons the meeting had been canceled.

Idaho Dispatch did not witness any acts of violence during our time at the event where approximately 500 protesters had gathered to oppose CDH’s proposed order.

The Boise Police Department did release a statement on Twitter that one individual was inside the CDH building and was trespassed out of the building when they refused to leave.

In regard to the protest at the CDH facility, Diego Rodrigues of the Freedom Man PAC, prayed for the officers prior to the event starting and asked that everyone in the crowd remain peaceful.

As to the individual who was trespassed out of the building, Idaho Dispatch did not witness the event described by Boise PD. That person, described as trespassing by BPD, was reportedly taken to the Ada County jail.

Again, Idaho Dispatch did not witness anyone threatening police officers or shouting things at them but we do want to also say that we were not right next to the officers throughout the entire event and can only report what we saw personally.

One or more individuals did bring a metal pail to the CDH facility protest and burned masks in the parking lot inside of the pail. 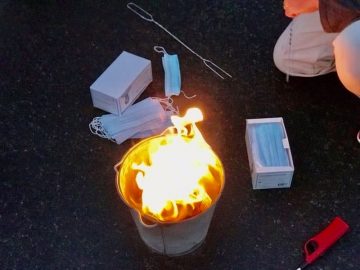 Prior to the protest officially beginning, the organizers played audio of what they said was medical professionals who are opposed to lockdowns, mask-wearing, and other proposals from government officials on COVID-19. One of the individuals on the audio said that COVID-19 is not real.

After Rodriguez prayed and said a few words to the crowd, Miste Karlfeldt from Health Freedom Idaho came up and spoke to the crowd.

While Karlfeldt was speaking, a Boise Police officer asked Rodriguez to turn down the volume on the audio because it was disrupting the meeting taking place inside. Idaho Dispatch does not know if the volume was ever turned down.

Soon after Karlfeldt was done speaking, the group played the U.S. National Anthem which seemed to be louder than the speakers themselves.

Idaho Dispatch asked Karlfeldt if she had a statement she would like to put out about the event and this is what she sent us:

I can only speak to what I saw at the CDH today. I saw a parking lot full of freedom-loving people taking a stand for their right to make their own health decisions. The people gathered in a peaceful protest against the unconstitutional mandates the board was considering. The board has kept the people out at every turn. First only allowing comment 24 hours BEFORE the meeting, then not allowing any public comment at the meetings, they further pushed out the people by requiring masks to enter a building funded by the very taxpayers they are attempting to keep out. The people are frustrated which is why they are now showing up in mass to have their voices heard by their very presence. I applaud the people who showed up at CDH today. We have a republic if we can keep it and indeed we defended it today.

When it was announced by Rodriguez that the meeting had been canceled, the crowd cheered.

Several other speakers then came up to the podium and asked to speak. It was not long after this that Idaho Dispatch left the protest.

Idaho Dispatch was unable to interview individuals from either side of the event tonight but we did get video and pictures of both sides.

Here are some of the images of signs individuals had that supported the CDH order to be voted on:

Here are some of the images of the crowd who were opposed to CDH’s order: 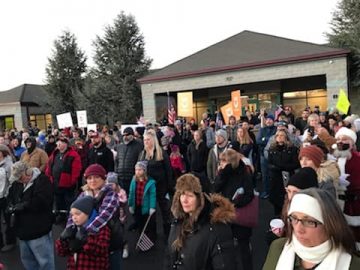 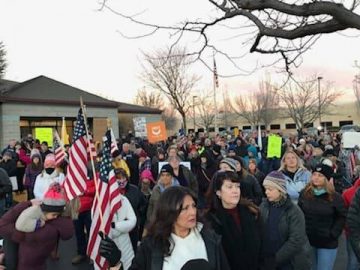 While Idaho Dispatch was leaving the CDH area, we heard the reports that Ada County Commissioner Diana Lachiondo had protesters at her home who were banging outside the door of her home.

Idaho Dispatch did review one video of individuals who were making noise outside of Lachiondo’s home. At no point in this video did anyone go on Lachiondo’s property.

The individuals protesting were making a lot of noise outside her home even though she was not inside.

Idaho Dispatch did speak to one of the protesters, Robert Jones, and asked him why they were protesting at her home.

Jones told Idaho Dispatch that he believed Lachiondo was at her home doing the meeting virtually and that he did not realize Lachiondo was not there.

Jones also told Idaho Dispatch that no one went onto the property and he informed us that he has body cam footage to prove that no one did. However, Idaho Dispatch does not yet have that video and we will release it if we are able to obtain it.

Idaho Dispatch has reached out to Lachiondo to see if she had a statement she would like to put out. Please note that Lachiondo has not had much time to respond and we will update the article if she responds.

Please note once again that much of this article is our firsthand account of what we saw personally and cannot account for other stories that may arise that we did not witness.

What do you think of the events this evening? Is it okay to protest outside the home of elected officials or should homes be off-limits?

23 thoughts on “Live Report: CDH Meeting Canceled at the Request of Mayor McLean and the Boise Police Department”