Two weeks ago the Idaho capitol building was vandalized during a protest over George Floyd’s death.

Daisy Shannon Heatherly, 18-years-old, was arrested and charged for the crime. She was taken into custody on the capitol grounds soon after the incident occurred.

Idaho Dispatch spoke with Pam Hemphill who was at the capitol when the bell was vandalized.

We asked Hemphill why she was at the capitol and she told us has been keeping an eye on the capitol to try and help keep these types of incidents from happening.

At approximately 8:42 p.m. a man driving a white Geo Prism stopped his car in front of the capitol. After he exited the vehicle he allegedly ran up to the bell and began defacing it with an unknown object.

The bell was “engraved” into according to Hemphill which may indicate a knife or other sharp object was used.

While Hemphill didn’t get the incident on video, she did manage to get a picture of the vehicle, including a license plate of 1A486EE. 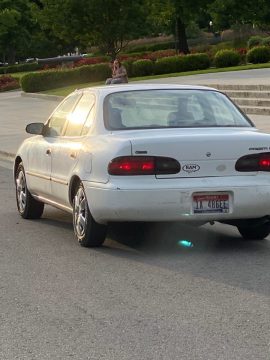 Hemphill said the man looked approximately 45-years-old, had short blonde hair, a big belly, and was caucasian. Hemphill said she had seen the man at Black Lives Matter protests earlier this month.

She told Idaho Dispatch that she gave a report to the Idaho State Police right after the incident occurred.

Another image obtained from those at the capitol show what appears to be an Idaho Capitol security officer taking notes next to the car. 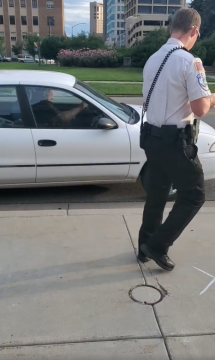 What did the man do to the bell?

It is difficult to make out from the images but Hemphill said that the words, “F*K USA” were engraved into the bell. After the man allegedly made his engraving, he jumped into his car and sped off.

If you enlarge the image you can make out what the man allegedly did to the bell. 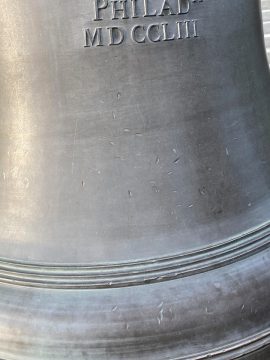 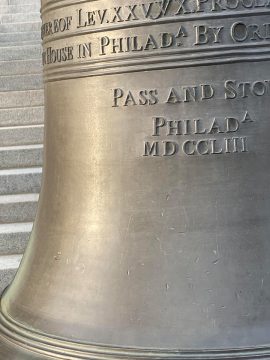 Recently, there have been statues across the country that have been defaced, destroyed, and toppled.

In Portland, a statue of George Washington was defaced and torn down. Additionally, a statue of Thomas Jefferson was also vandalized and taken down in Portland.

Idaho’s capitol building and grounds have several historical statues and symbols such as the Liberty Bell.

So far, the two incidents appear to have been done by just a couple of people. To date, there has been no indication that a larger gathering of people intend to do more damage to Idaho’s capitol building or statues.

We will update this story if the person responsible for the vandalism is found or arrested.