Mask mandates continue to sweep across the state.

A number of cities, counties, and Health Districts in Idaho have mandates in place. Some have chosen to avoid a mandate and only done advisory orders.

Some cities have forgone taking any action due to citizens speaking out against them.

Lewiston is one of the cities tabled an effort to do an advisory several weeks ago because there was not enough support.

However, the Lewiston City Council is proposing an update to their proposed order that is now a mandate if it passes.

Additionally, the City Council Meeting will take place over zoom instead of in-person like it was last time. It is unclear why the in-person meeting was moved but we are reaching out to the Lewiston City Council for an answer.

Idaho Dispatch received a screenshot of an email to the city council from another city councilmember and it appears as though Councilmember Bradbury is the one proposing the changes to the advisory order to make it a mandate. 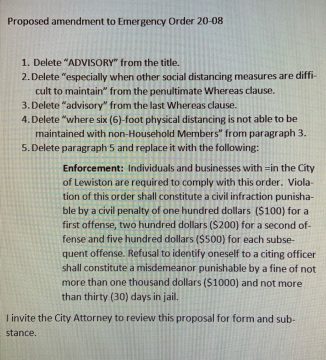 As you can see from the proposal, the word “Advisory” would be removed from the Emergency Order.

Additionally, there are proposed civil infractions for violating the order. The first offense being $100 and after the third infraction, $500 for each one.

If someone does not identify themselves to a police officer, then they could be charged with a misdemeanor which carries a jail sentence and a possible $1,000 fine.

We have sent an email to the city council to get their thoughts on the proposal. Our email also asks members why the meeting will only take place over Zoom instead of being in-person like last time.

If the city councilmembers provide any answers to our questions we will update the article accordingly.

Finally, if you wish to email the city council to support or oppose the proposed change, their email addresses are listed below.

3 thoughts on “Lewiston to Vote on Mask Mandate, Moves In-Person Meeting to Zoom Only”