Part of the concern from some business owners was that the continued unemployment money was more than some people would make working. Their opinion was that the assistance discouraged people from looking for work.

Opponents of ending the program say that with the low wages some employers are offering, they discourage people from returning to work. They also argue that inflation is rising, and it may be necessary for someone to stay on unemployment to pay the bills.

Some of Idaho’s lawmakers and citizens reacted to Little’s decision to end Idaho’s participation in the programs.

First, Little posted the following tweet regarding his decision:

Not everyone was pleased with Little’s statement. Several Democrat lawmakers spoke against his decision. 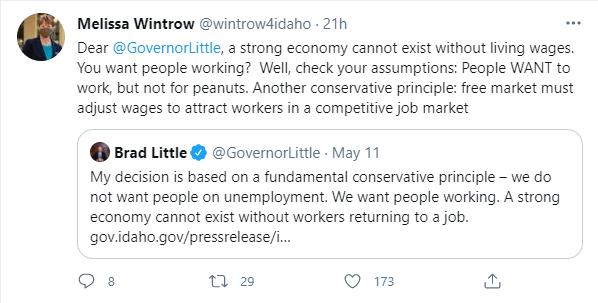 On the Republican side of the aisle, Little received public support from several lawmakers. Some praised Little for ending the programs, while others said the programs should have been ended a lot earlier.

It was the right call. The premium was intended as a short-term shutdown-related benefit, not a permanent source of income. Next week Caldwell will host a job fair where employers are trying to fill 2,200 positions.  There is zero reason to continue.

However, Sen. Christy Zito (R-Hammett) said Little should have done it earlier and told Idaho Dispatch the following,

I think it was a good thing for him to do. I believe he should have done it some time ago. Once again, he is playing the legislature and bowing to media pressure. It is time for people to go back to work. Remove the mandates and get the government out of the way. Get rid of the incentives for people to stay home. Our economy may be growing but a large concern is that so many businesses can’t find people willing to work and that could undo everything we have accomplished so far.

On Twitter, most of the comments appear to disagree with Little’s decision. Many of them saying the benefits were not very large and that Idaho needed to increase its minimum wage.

Here is a screenshot of some of the comments that both agree and disagree with Little’s decision: 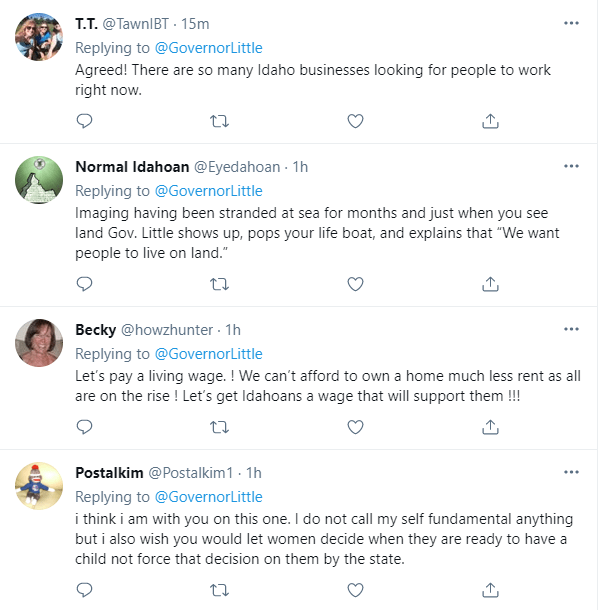 Some citizens felt that the wages in Idaho were too low, so it would not be fair to cut off their unemployment. Other citizens felt it took too long for Little to respond and that the benefits should have been ended months ago. Many others thanked him for the decision but didn’t elaborate further.

What do you think of Little’s decision to end Idaho’s participation in the federal unemployment assistance programs implemented last year?