The nation is just days away from Joe Biden’s inauguration as President of the United States.

In anticipation of that event, security measures have been increased in Washington D.C. which includes over 20,000 National Guard troops.

The F.B.I. also says that a nationwide movement is underway to have “armed marches” at all 50 state capitols. Questions about who is involved in the “armed marches” continue and Idaho Dispatch wanted to find out for the public what may or may not be occurring in Idaho.

The F.B.I. made no mention of the names of a specific group or groups who were going to “storm” state capitols nationwide.

Are conservative groups in Idaho planning to be a part of an “armed march” at the capitol?

Idahoans having guns at political events is not uncommon.

Idaho is one of the least regulated states when it comes to firearms according to Guns and Ammo Magazine which releases an annual ranking of “gun-friendly” states. Guns and Ammo ranks Idaho as the second most gun-friendly state in the country.

There are also no prohibitions inside Idaho’s capitol building against carrying a firearm.

In years past, rallies have taken place inside and outside the capitol in support of the 2nd Amendment by groups like the Idaho Second Amendment Alliance.

The ISAA has held annual events across the state, including marches to the capitol, however, the ISAA is not taking part in the event on Sunday.

In fact, none of the conservative groups that Idaho Dispatch spoke to are attending the nationwide event either which is scheduled for January 17th at noon.

When asked about the event on Sunday, ISAA Chairman Seth Rosquist had the following statement:

We love having rallies for the 2nd Amendment here in Idaho. Nearly every political event on the conservative side has armed citizens. However, after carefully reviewing the literature that is circulating about the planned “armed march” on Sunday, it was clear to us that there may be nefarious reasons for the event. It almost seems as though someone on the political left made these flyers. They don’t look like typical flyers 2nd Amendment groups use. We don’t use the phrase “armed march” for any of our events. We don’t use the word “democracy” to describe our republic.

The colors on the flyers and the imagery being used, such as the raised hands, seem to reflect what you would see on an Antifa poster, not those who support freedom and liberty. We are asking our members to avoid participating in this event. Our fear is that gun owners who attend with good intentions will be maligned and blamed for someone on the other side deliberately attacking our own capitol or attendees. Citizens are certainly able to attend whatever events they wish but our organization will not be part of whatever is taking place this Sunday and we have made that intention clear to law enforcement and Idaho’s political leaders.

Idaho Dispatch has obtained two fliers that have been circulating on the internet about the event which you can see here: 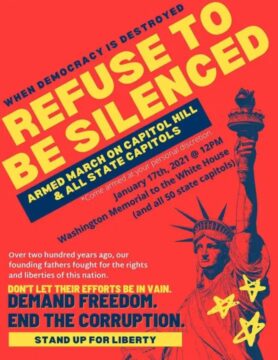 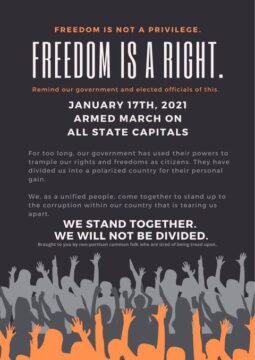 No specific organization is listed on the flyers and Idaho Dispatch has been unable to confirm who created them or made the initial call for “armed marches” on all 50 state capitols.

The ISAA was not the only political group to decline taking part in the Sunday event.

Idaho Dispatch also reached out to Idaho Freedom Foundation’s Vice President Dustin Hurst to ask if their organization is encouraging or discouraging citizens from attending the “armed march.”

Here is what Hurst told us,

We aren’t planning to participate. We hope that civility wins the day. Violence is not the answer to the political problems and challenges before us.

Leadership is asking our members to stay away.

Idaho Dispatch has not gotten a direct quote from Ammon Bundy’s group, People’s Rights, but indications are that his organization is also not planning to participate on Sunday.

Idaho Dispatch attempted to find any group in Idaho that is planning on being a part of the “armed march” Sunday but we were unsuccessful in our effort. If any of our readers are aware of groups planning to attend, please send an email to info@idahodispatch.com right away.

Do you believe there will be an “armed march” at Idaho’s capitol on January 17th or any day leading up to Inauguration Day?

Let us know what you think of this story in the comment below.

4 thoughts on “Is There an “Armed March” Planned at Idaho’s Capitol? Conservative Groups Respond”