On March 25th, 2020 Gov. Little announced that Idaho would be locking down the state.

Businesses across Idaho were forced to close unless they were deemed “essential.”

However, even with the “essential” label for some businesses, the economy slowed significantly. As a result, unemployment skyrocketed and state revenue plummeted.

Governor Little has now announced cuts to the education budget for the fiscal year 2021 because the state is expecting a shortfall in taxes.

Idaho has a constitutional requirement to balance its budget and provide public education. After several months of our economy in major decline, a shortfall in the state’s ability to balance the budget was inevitable without changes. Many Idahoans were expecting a cut to the budget in some fashion.

Gov. Little said earlier last month, “It is clear due to the ongoing COVID-19 pandemic, that the expenditures from the general fund authorized by the Legislature for the fiscal year 2021 will exceed projected state revenues.”

A major part of Gov. Little’s plan to balance the budget is a $99 million cut to the education budget. 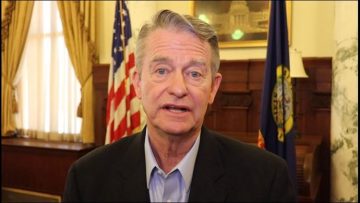 A number of elected officials spoke out on the issue.

Rep. Tammy Nichols (R-Middleton) told Idaho Dispatch, “It is unfortunate that our state is in this situation, but the governor feels these cuts are necessary. I am hoping with the cuts that a very careful look will be given at the needs versus wants in our education spending. I hope that money is truly being utilized for our teachers and classrooms and going to the important things that give our children an excellent, quality education.”

A number of Republican legislators over the years have been concerned about how the money for public education has been spent. While all legislators believe that funding is necessary, many of them are concerned with what the money is used for. There are often accusations of waste and overspending on administrative costs versus paying teachers more.

Idaho Dispatch also spoke with Rep. Bryan Zollinger (R-Idaho Falls) and he told us, “I think it’s unfortunate that he is forced to cut a constitutionally mandated budget. However, because of the unconstitutional and burdensome COVID-19 forced shutdown of our economy, tax revenues are going to be much lower and thus these cuts are probably necessary. That said, with a 3.5 Billion dollar Health and Welfare Budget it’s hard for me to imagine he could not find spending that is not constitutionally required to cut instead of the K-12 education budget.”

While Rep. Zollinger and Rep. Nichols both agree that cuts had to be made, they both looked at different angles of government spending and how it is impacting the state’s ability to “pay the bills” during economic downturns.

While Republicans appear to agree that some cuts were going to be necessary, Democrats opposed cutting spending to make up the difference.

Senate Minority Leader Michelle Stennett and House Minority Leader Ilana Rubel released a statement and said the following, “Idaho’s children have already experienced a serious disruption to their education over the past two months, but those learning setbacks will be worsened dramatically, with long-term consequences, if the proposed education cuts become a reality.”

Additionally, they want Gov. Little to tap into the “rainy day fund” or find another avenue for balancing the state budget. For instance, in the statement they released, they mention that the state could remove current sales tax exemptions.

Both sides seem to agree that changes to the budget are necessary but disagree on the avenue for balancing the budget.

Many conservative Republicans argue that the state budget increases (spending) have been increasing rapidly for years since the 2009 economic downfall and that the budget was growing too quickly. They argued that if spending was now slowed down, another downturn was going to cause problems. Now, these conservative Republican legislators are saying that what they had feared for years is coming to fruition.

Democrats argue that additional taxes are needed and then cuts won’t be necessary at all.

The education and healthcare budgets are by far the largest portion of Idaho’s budget and it isn’t surprising that they are usually the first target for cuts.

For now, Gov. Little seems to be on course to make the cuts. The budget adjustment does not include cuts to teacher salaries but does include a freeze on their pay.

Interestingly, Democrats in larger numbers seem to support the economic shutdown in order to try and stop the spread of the coronavirus.

However, a result of that shutdown is going to be a loss in tax revenue. Did Democrats not believe that shutting down the economy was going to have an impact on the education budget?

The natural result of lost state taxes is a cut in the state budget.

Perhaps if Idaho’s economy can bounce back quickly then cuts to the budget will not be necessary.

One thought on “Idahoans Debate Whether Gov. Little’s Education Cuts Were Necessary”